By now I'm sure most of you have seen Collector Crate: a monthly subscription box containing sports cards and other pieces of sports memorabilia.  If you haven't... feel free to click here, here, or here for detailed descriptions and a sampling of the products people have received.

I have to admit, I came close to purchasing one last month.  Thankfully I had enough willpower to hold off, because two weeks ago I had the opportunity of a lifetime fall into my lap at the De Anza Flea Market.

When: Saturday, November 1st
Where: De Anza Flea Market
What: Dime Box Cards and Dollar Sets/Packs
How Much?:  $31

Imagine being able to build your own box and fill it with vintage, oddballs, inserts, rookie cards, memorabilia cards, and autographs for the bargain price of 10¢ per item.  Yeah that's right... a dime box Build-A-Box. 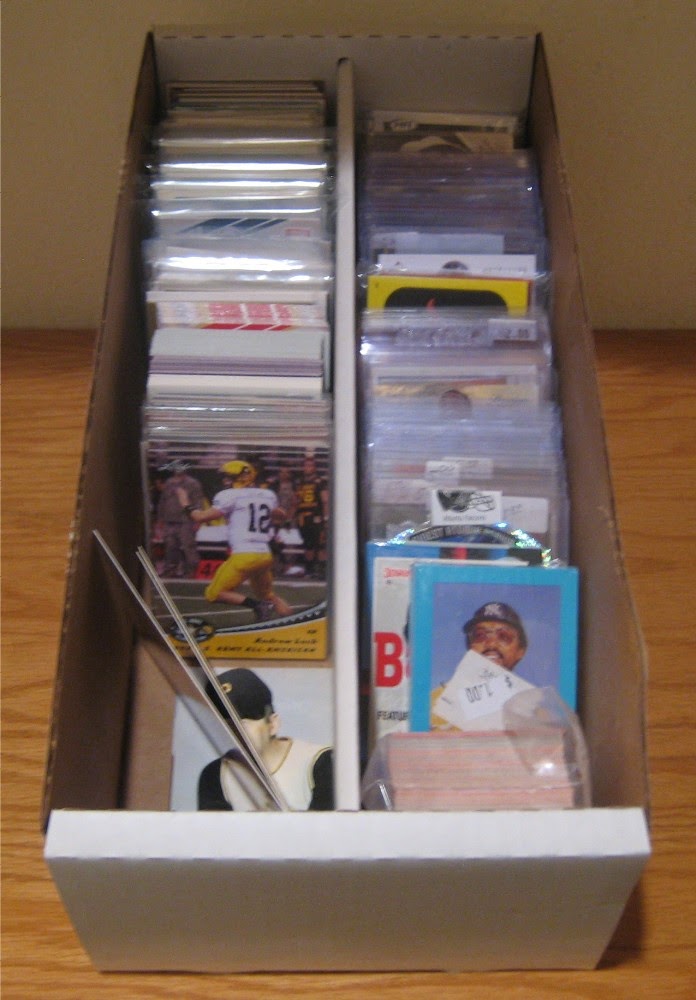 I'm not going to lie... it was pretty awesome and a week later, I was still digging into the box of goodies.

Let's kick things off with some vintage baseball...

I added thirteen new cards to my vintage baseball card binder.  Most of them were 70's hall of famers, but two of my favorites featured guys without plaques in Cooperstown.

Anyone remember Renata Galasso cards from the 80's?  How about SSPC sets from the 70's?  The vendor had a whole 5,000ct. box dedicated to them. 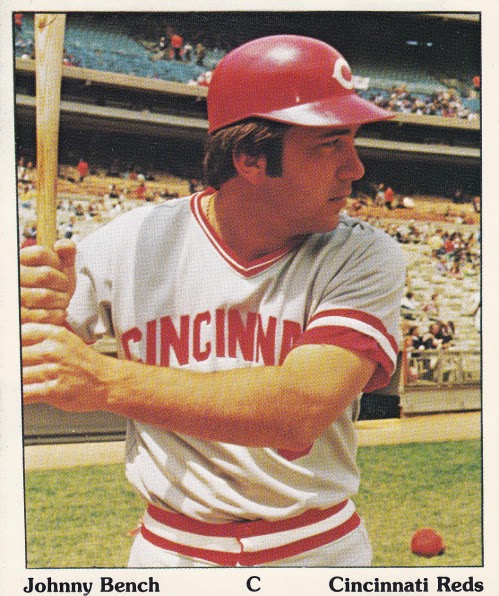 I ended up grabbing close to fifty different cards... including this early issue Gary Carter card and this oversized Johnny Bench.

On the other hand... there weren't a lot of inserts in the boxes.  In fact out of the handful that I saw, these were the only two I picked up:

The bulk of the 5,000ct. boxes were filled with rookie cards.  The vendor had bulk lots of both football and baseball rookies.

Heck... I even grabbed some Broder rookie cards too...

At first I thought the Griffey was legit... but my buddy pointed out that this version was a fake.  And while this Darvish Broder is pretty cool... I'll take my super hot Sharapova OMR rookie card any day of the week.


The final single I'll share with you guys is a card I almost picked up a few months ago for $3 on eBay. 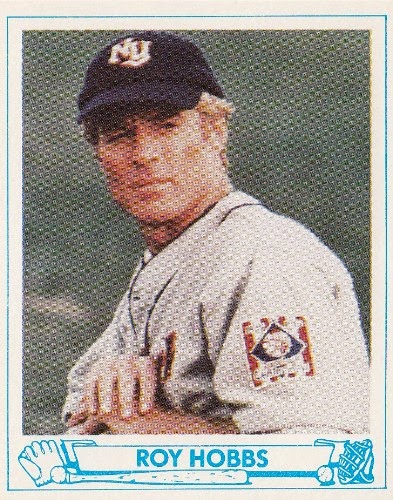 Six months ago, The Natural celebrated its 30th Anniversary.  I remembered seeing this card in a Larry Fritsch catalog and immediately wanting to add it to my collection.  For being a prop card, I've actually seen several copies sell for $5 to $7.

Outside of dime box cards, he also had a bunch of sets and packs for a dollar each: 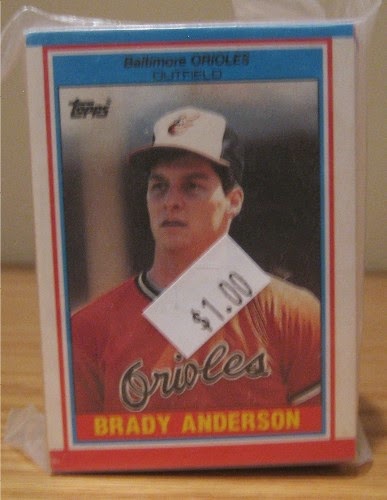 I'm pretty sure I already own the factory set of these baseball cards from across the Atlantic... but for a buck, I figured I'd grab a second set. 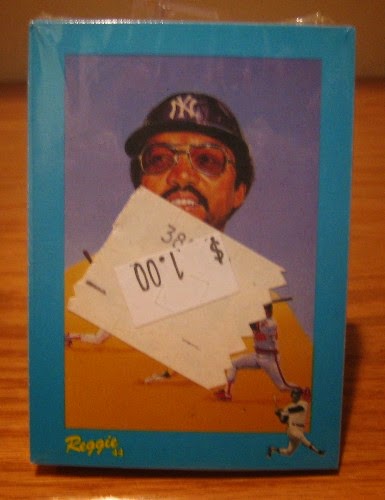 This is a nice 30 card set from the 80's featuring Mr. October throughout his career... including a few photos of him as an Oriole.  Renata Galasso issued two versions of this set: standard (2.5" x 3.5") and mini (same size as the 75T minis). 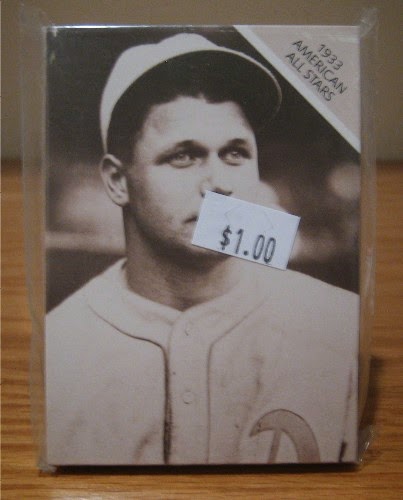 If you're a fan of old school hall of famers, then this set is for you.  It contains everyone from Babe Ruth to Lefty Grove and they feature the photography of Charles Conlon.  I should have grabbed a few of these, but it started to rain and I was in a rush.

The last thing I added to my Build-A-Box was this cello pack of 1988 Donruss: 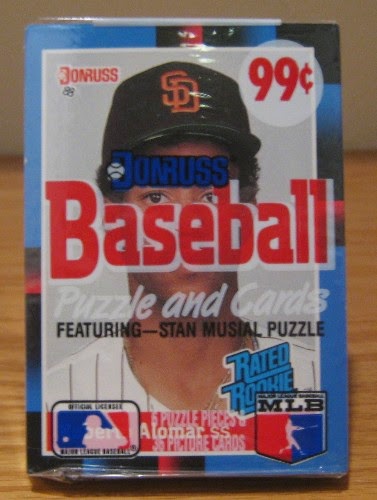 Now I'd normally avoid this product like the plague... but I enjoy collecting cello and rack packs with rookie cards of stars on top.  This was a nice addition to both that collection and my Padres PC.

There were a bunch of other cards I threw in... like 10¢ autographs and jersey cards... but they were mostly minor stars and commons.  Did you ever think we'd see the day where we'd see autographs and memorabilia cards in dime boxes?

In the end... this entire shoe box filled with cards cost me $31 (box not included)... which is about a dollar more than the bronze level Collector Crate.  But I'm okay with paying an extra buck to be able to pick stuff I actually want.

By the way... sorry about the infrequent posts.  I hope to catch up on some scanning and publishing over the Thanksgiving break.  I also apologize to all of the bloggers on my reading list.  I know it's been awhile since I've visited some of your blogs, but I hope to catch up on your posts over the break as well.

Until then... happy Thursday and sayonara!
Posted by Fuji at 3:00 PM

Geeze, that sounds like an absolute haul. While I still occasionally get the itch to rip packs, you can't beat having the ability to pick up exactly what you want for your collection. And you *really* can't beat getting them for a dime. I'd be drooling over the prospect of dime autographs.

Galasso and SSPCs are my secret pleasure. Love those.

That Roy Hobbs card came as part of a little set in an anniversary edition of the movie a few years back. I got the cards a 'signed' baseball and a Knights cap.

Sheesh, I'm going to have to send money to you to buy stuff for me.

I'll throw money in too. What an awesome pickup.

That sounds like absolute cardboard heaven for me. I've never seen those Reggie minis before. That SSPC Carter is fantastic as well. I'm hoping to pick up a copy of that one sometime in the near future.

That sounds like fun. /starts looking for houses near De Anza Flea Market.

Dime boxes are looking more and more like hidden trousers waiting for someone to find them!

OMG, I live on the wrong coast for card shopping. A whole box of SSPC and RG! I've been looking for that at the National and never see it.

PS, I still have some Hometown Heroes pulled for you. Not sure where we left that.

Less than a week to my Exam-perhaps I will have to hit the De Anza Flea Market as a reward-Great steal Fuji!

Actually... the pack set actually set me back a buck (along with the sets). But yeah there were a bunch of autographs and memorabilia cards for a dime.

Totally agree. $3 was my limit and even then I didn't grab it.

Homes in Cupertino are way out of my price range. :(

If they're back again in December, I'll make an offer on the entire box. I wish I had more time to dig through that box. It was raining that day, so I had to rush through the boxes and grab as much as I could before the cards became damaged.

Let me know if you go. Good luck on your exams.

If you ever plan a trip to the west coast, make sure it's during the first weekend of the month and I'll give you a tour of Bay Area's flea markets.

Thanks for the info. That signed baseball sounds awesome. Is it Hobb's auto or Redford's?