I caught the Marvel Comics trading card bug, back in 1990... when Impel released their Marvel Universe set. It was a well designed set, that featured cards of all of my favorite comic book characters: Spider-Man, Punisher, Wolverine, and of course the sweet looking Venom. But if you collected back then... you know it wasn't the set that everyone wanted... it was the so called rare holograms that were inserted into packs at a rate of 1:36 packs. 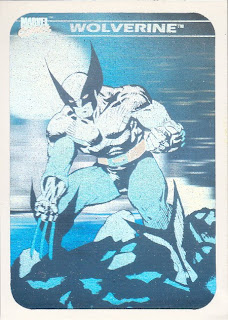 It was the beginning of the insert craze and prices of these holograms were getting ridiculous. They were so insane, that it eventually drove me out of the comic card hobby. Which is why, I completely missed out on collecting the 1994 Marvel Masterpiece set.
Then last month, I stumbled across a complete set of the Silver Holofoil insert cards for $5. The set contains ten cards and were inserted into packs at a very reasonable rate of one per three hobby packs. So, if you purchased a hobby box with perfect collation you should be able to pull a full set of these, plus have a couple for trade bait.
Set: 10 cards 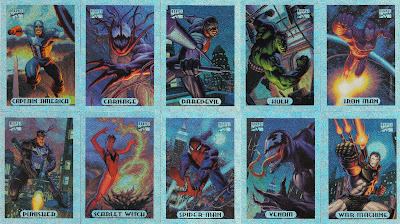 This set is loaded with big names: Captain America, Iron Man, Hulk, and of course Spider-Man.

But ultimately, I purchased this set for two reasons: Venom & Carnage. I'm a huge fan of these two villans. It's a shame that Marvel didn't do a better job portraying these two in Spider-Man 3.
Beckett Value: $20
Beckett currently lists the complete set at $20, while each of the ten singles are valued at $2.50 a piece.
eBay Value: $5 to $15
Recently completed sales have shown these sets closing anywhere between $2.95 (+ $2.50 shipping) to $15 (+ $3.26 shipping). If you're interested in picking a set up, there's one on there right now for $0.99 + $3.63 shipping or you can Buy It Now for $10 (or best offer) with free shipping.
Wednesday night's question of the evening...
What's your favorite movie based on a comic book series?
I don't get to the theaters very often, so I haven't seen any of the newer Marvel movies. I really enjoyed the X-Men trilogy. It's hard not to like Professor Xavier and his team of super heroes. However, the movie I'm most excited to see is the one featuring Deadpool... which I heard is currently in the works. That guy has everything... a cool costume and fights with two samurai swords. He sort of reminds me of Snake Eyes and Storm Shadow from G.I. Joe.
Well... happy hump day everyone. Only two more days until the weekend. Stay safe. Sayonara!
Posted by Fuji at 8:04 PM

I was always a Batman guy.

I probably need to say Spider-Man. I made a point of seeing the first one on the first day, arranging to take a three-hour break at work (Blockbuster) to see it. Plus, I had (and still have) a thing for Kirsten Dunst.

Without a doubt, Scott Pilgrim.

Without a doubt, the most enjoyable watch for me was the second Hulk movie with Edward Norton. Not that piece of garbage with Bana.

ryan g & markz - i like the spidey series too. he's one of my favorite comic book characters

g moses - long time no see G... hope things are going well. that first hulk stunk it up... but the norton one was a lot better.

Scott Pilgrim vs. The World was an awesome movie, but an even better series of graphic novels. If you haven't seen the movie, definitely check it out. It appeals to fans of both comic books and video games both of which I've seen mentioned here multiple times.

offy - lol... you know me too well. both of those things are right up my alley. i'll have to keep my eyes peeled to see if i can find a cheap copy... or maybe it's on netflix. it's officially high up on my "wantlist".

I'm with Offy. Scott Pilgrim is probably the best representation of a comic book to a movie. It has to be on the top of my list. The Christopher Nolan Batman movies are right up there, too.

tj - now i'll definitely have to chase down this "scott pilgrim" movie.

Scott Pilgrim was probably the worst film ever made. It was slow boring mad no sense and so far from the comic it might as well have been spiderman 4.

Anonymous -I still haven't gotten around to watching the movie, but maybe this summer I'll finally have some time to check it out. Thanks for the feedback.