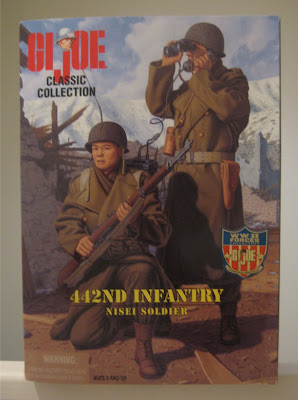 Back in 1996, Hasbro introduced the G.I. Joe Classic Collection, which was intended to resemble the original G.I. Joe figures from the 60's. These 12" figures became popular, because of their attention to detail which featured cloth outfits and multiple accessories. The Classic Collection line ran from 1996 to 1999 and included over one hundred figures.
One of them was this 442nd Nisei figure, which was produced in 1998: 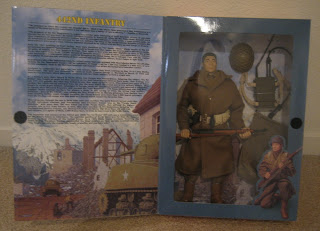 You can still find these figures at hobby stores, flea markets, and online stores. But I ended up picking this figure up on eBay. I had been trying to find this particular figure for years, but they were a bit pricey and I couldn't see myself spending $50 on a doll. Then a few months ago, I started checking eBay and discovered that the prices had settled down into the $20 to $30 range. So, I began tracking prices and eventually bid on one. I won the auction for $19 ($8.01 for the figure + $10.99 shipping).
You're probably thinking... why this particular DOLL?
Well, the 442nd Infantry Regiment was an all Japanese-American unit that primarily fought in Italy and France during the later part of World War II. They were known for their bravery and determination are the most highly decorated unit in the history of the United States armed forces.
I've always been fascinated by the fact that some of these guys were willing to put their lives on the line for their government and country, which had recently sent them and their families to internment camps. 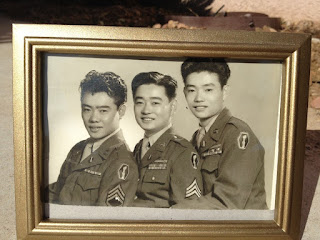 The Noguchi Boys: Steve, George, and Henry
A few days ago, I took a trip down to Las Vegas to visit my parents and had the opportunity to sit down with my father's friend, Steve Noguchi. Mr. Noguchi and both of his brothers were a part of the 442nd Infantry Regiment. Our conversation lasted over an hour and covered everything from his time at the Poston Internment Camp (in Arizona) to an amazing story about how his brother, George earned a Bronze Star for saving the life of a guy who suffered from shell shock in a burning tank. It was one of those times where I just sat back and tried to soak in as much information as I could. 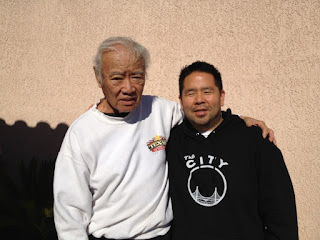 Mr. Noguchi & Me
Mr. Noguchi, if you're reading this... Thank you for taking the time to "talk story" with me. It was truly an honor to be able to sit down and listen to a real American hero.
By the way... while I was hanging out in Sin City... I also had the opportunity to relax and bond with my parents.
Papa Fuji drove me around the community in his golf cart to check out garage sales in their community (sadly I discovered no sports cards or any sort)... 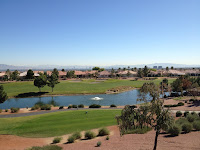 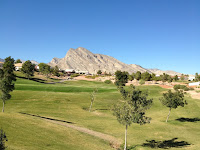 And earlier, Mama Fuji took me to the casino for a rendezvous with Senorita Slots. Normally, she takes my money and leaves me feeling dirty and broke. However this time, I had my way with her and turned $20 into $100.

I can't remember the last time I quintupled my money. Of course, I donated some of it back to her... but in the end, I was able to take my parents out to dinner, buy my friend some treats, and still have a few dollars to spare. In fact, it's the first time in years that a trip to Vegas didn't cost me a dime. BTW: My flight was free, because I had a voucher from Southwest Airlines.
So... thanks Mom & Dad for everything... you're the best!
Today, I have two questions for you...
Do you own any dolls?
and
Who are your heroes?
I'm embarrassed to admit this... but I actually own two dolls: the G.I. Joe seen above and a Los Angeles Lakers Barbie doll. It should be noted that the Barbie doll was a gift and not a purchase and I don't consider my Star Wars figures, SLUs, or McFarlanes to be dolls... they're action figures!
As for my heroes... there are many people in my life that I admire and respect, but none more than my parents. Mama Fuji is one of the most generous, kind hearted woman in my life, who has always put her family and friends before herself. And Papa Fuji is everything I aspire to be: a hard working man, who is honest, responsible, and humble.
Enjoy your Sunday everyone... sayonara!
Posted by Fuji at 8:37 AM

I have the Eisenhower GI Joe and more Captain America Action figures than I can count. Great story about meeting Mr. Noguchi, that unit was very impressive.

Be proud Fuji! Call them dolls!
I *wish* I had the 12" GI Joes from my youth. I had a lot of fun playing war with them out in my back yard and took a lot of crap from other guys for doing it. But I don't care!
I have a few McFarlane figures of Nolan Ryan and a few other World of Warcraft ones. I put them on my credenza in my office. I love when serious looking vendors come to my office, and see one of the figures then their face lights up and a conversation begins!

I have a couple 12" "dolls" similar to the GI Joe from a couple movies, but I couldn't tell you what they are now. I think one of them is Batgirl. Heck if I know. I sold off all the "doll" toys I had along with my action figures before I moved to California, and I'm sure I got much less than I should have for them.

My heroes? My 11th grade English teacher inspired me to become a teacher. I also had a big brother growing up (through the Big Brothers/Big Sisters organization) that was totally great for me.

padrographs - i was checking out the checklist this morning and i noticed the eisenhower. thought it was pretty cool that they made specific people. they also produced george patton, francis currey, omar bradley, george washington, colin powell, mitchell paige, bob hope, teddy roosevelt, buzz aldrin, and my personal favorite... ted williams.

reivax - lol... thanks for the words of encouragement. i proudly have my gi joe doll displayed in my office!

as for the workplace, i don't dare call them dolls... if i did my students would never let me hear the end of it ;-)

ryan - now that you mention it, my sophomore english teacher pushed me to work hard in high school. he was one of the toughest teachers i ever had, but he was also inspiring and got the most out of his students.

maybe one of these days some of our former students will come back and tell us they were inspired by us ;-)

Fuji, you're a badass looking dude. I thought I'd just throw that out there to start off with. If you and I walked into a bar and I had my Wolverine chops, we'd have our pick of barstools. Just saying.

Nope, don't have any dolls. Though I've been looking to get into some - mostly of the oversize comics variety that can't be considered action figures.

And like many, most of my heroes were teachers. Had some good ones along the way.

g - lol... one of these days, we're gonna make it happen. either i'll come up for a warriors/blazers game, or you come down for a penguins/sharks game.

My two heros are my Grand Fathers and my Great Grand Father. My GGF fought in WW1 for the British and was an air raid warden during WW2.H passed away when I was 12 years old,but the stories he told me about both wars and his life after have remained firmly in my memory.He joined a bicycle regiment in WW1 bcause he did not like the idea of marching,of course he then spent most of his time pushing his bike through the mud of Flanders,he used to laugh so hard he would cry at that story. My Dad's father was captured by the Japenese at Singapore and spent 4 years in a POW camp,what will stay with me forever is the fact he never held a grudge or said a bad word about the Japanese. My Mum's Dad was a soldier in the German Wermacht and was captured in France in late 1944by American forces and spent the rest of the war in a POW camp in the UK,where later he met my Nana.I have spent many an informative hour or two with him as he tells me about life in Hitlers Germany and his life after the war as a released POW.Sadly only Mum's Dad is left alive but he and Nana are going strong aged 85 and 86.

Great story about Mr Noguchi,these guys are real heroes and deserve as much recognition as possible.

hairy - thanks for sharing those amazing stories. you definitely have an interesting family background that anyone would be proud to share with their offspring.

my dad served in the korean war and one of these days, i'm going to sit down with him and have him retell some of his war stories.