The Boone's: Three Generations of All-Stars 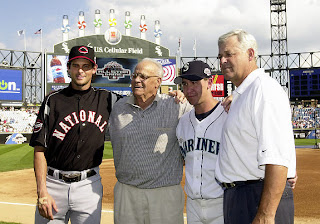 A few weeks ago, I came across an online company called Canton & Cooper who sell PSA/DNA autographs as well as unopened packs, AP photos, and other autographed items. In their clearance section they were selling autographed 8x10 photos of Ray Boone for $3.80. Ray Boone is the patriarch of the Boone family which managed to field three generations of ball players at the MLB level... a feat that only four families have so far achieved. 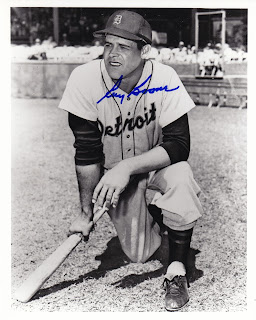 Ray played 13 seasons for six different teams. He had a solid major league career in which he hit 151 homeruns and made the all-star team twice with the Detroit Tigers in the 50's. 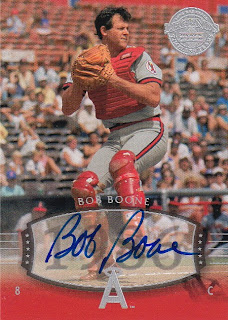 Personally, I was more familiar with his son, Bob Boone... who played 19 seasons with three different teams. He was a 4x all-star, won a Golden Glove Award at catcher seven times and is the father of two former MLB all-stars himself. 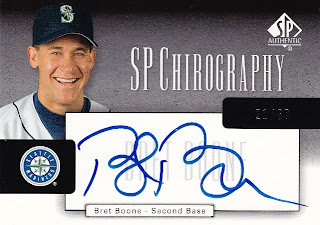 Less than two years after Bob retired, his son Bret made his MLB debut with the Seattle Mariners. Like father and grandfather... Bret went on to have a solid career which included three all-star appearances and four Golden Glove Awards as a second baseman. 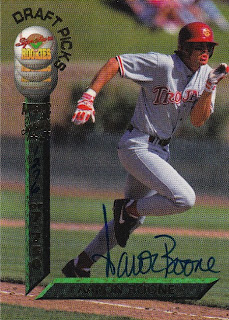 And finally there's Bob's other son Aaron, who was drafted in 1994 by the Cincinnati Reds, played 12 seasons and made the all-star team once in 2003.
There have been many great families in baseball over the years: the Ripkens, the Alomars, the Griffeys, and the Bonds... but only one has featured three generations and four players that have each been an all-star.
I'm planning on getting these four autographs professionally matted and framed and giving it to my dad for Father's Day next year. I think he'll appreciate the story behind their baseball family and the mark they left on the game.
Today's question of the day:
Who are some of your favorite families in sports?
They don't necessarily have to be from baseball.
Going back to Canton & Cooper experience...
I ended up buying a bunch of other items for my PC... like a 1985 Fleer cello pack with a Kirby Puckett on top, two 1983 Fleer cellos (one with a Gwynn on top and another with a Boggs on top), and a Ray Dandridge PSA/DNA autographed Perez Steele card.
They actually messed up my order, but their great customer service department took care of the issue and gave me a couple of free photos. One of the freebies is part of the newest prize package in my contest. 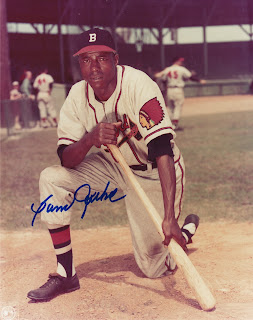 It's an autographed 8x10 photo of Sam Jethroe, who was the 1950 NL Rookie of the Year. Before making his MLB debut, he played several years in the Negro Leagues, where he captured several batting titles. He only played three seasons at the MLB level, but he led the National League in stolen bases two of those years. Jethroe was the first African-American to play for the Boston Braves and the last person to hit a grandslam as a Boston Braves player. Sadly Mr. Jethroe passed away ten years ago at the age of 84.
In addition to this 8x10, I'm throwing in this autographed photo of Hall of Fame pitcher Bob Feller: 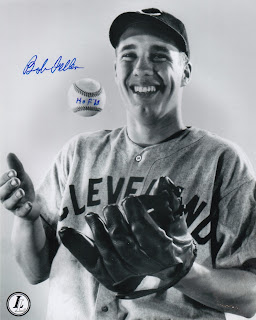 Feller's list of accomplishments goes on and on and on... but here are a few of the highlights:
8x All-Star
Led AL in wins 6x
Led AL in strikeouts 7x
Won the AL Triple Crown (Wins, ERA, & K's) in 1940
First Ballot HOFer in 1962
Mr. Feller lived a long life, but recently passed away at the age of 92. He was known for signing autographs for anyone who asked. The photo being added to the prize package has a little water damage, but if the winner frames the autograph it will be difficult to tell.
Finally, I purchased another Ray Boone autograph (similar to the one above) to add to the contest. All three autograph photos will be packaged together as one prize.
Okay... I'm running late to work. I'll have to update the contest tonight.
Thank goodness there's only two more days until the weekend... and only 8 more days until summer school is over. Then I get to enjoy my summer break. Enjoy the rest of your week... Sayonara!
Posted by Fuji at 7:50 AM

I liked the Gaits in Lacrosse, Paul and Gary. I guess twin brothers isn't quite as awesome as a whole family, but still neat.

In the not a true family file, I always liked that Fred McGriff and Terry McGriff were cousins, and then Terry is Charles Johnson's Uncle. Weird little connections there.

Also Eli played for Ole Miss where his mother went too!

like Martyn said, there's the Mannings... the Matthews as well in football. Father, Uncle, now two sons..
in hockey there are a lot, the Apps for one, but I'm closest to the Sutters. Seven brothers, six of them played in the NHL. At the same time.

I've been partial to Phil and Joe Niekro since they were very nice to a young sportwriter from a paper no one has ever heard of and gave me an interesting story to write.

The first sports family that came to mind are the Mannings. Then, the more I thought about it, the more I realized that NASCAR has a ton of famous families. Its just made for dynasties. The Pettys, the Jarretts, the Earnhardts, Wallaces, Waltrips, and on and on and on.
I also thought it was great seeing John Stockton watch his son David playing for Gonzaga during this year's March Madness.

The Stastny and Manning clans come to mind.

My favorite family from sports has got to be the Petty's from NASCAR. Lee, Richard and Kyle are GReat people that care about more than just racing, they care about their community and fans as well. I've personally met Kyle twice and he treated my wife and I like we were the only ones in the line. I would have loved to have seen what Adam's future would have been like.
The Pettys remember where they came from, and how easily it is to end up back there.
Their generosity in the community is an example for the ages. My wife and I dream of joining Kyle on one of his rides across America some day. His work with the Victory Junction Gang camps is just awesome, helping kids to forget their troubles for even one minute is worth every dime they get.

I like the Griffeys, Ken Sr & Jr and the other multi-generational family, the Bells, Gus, Buddy and David. Boxing's Father and Daughter duo, Muhammad & Laila Ali is a pretty cool combo. Hockey's Hulls, Bobby, Dennis and Brett, have over 1,500 goals between them.

When I was young and the Canseco twins were both on cards, I thought that was pretty cool, especially given my interest in Jose. How cool would it have been if Ozzie had made it to the A's, and you could have the Bash Brothers who were real brothers?

I've been a Griffey fan for a long time, too. I don't think much about brothers/fathers unless someone tells me they're related. I like the story of the DiMaggios, though, and it holds a better place in my mind because it started here in SF.

I am a big fan of the Martinez brothers. Ramon and Pedro both had good careers. Pedro better than Ramon of course.

They may not be my favorite of all time, but my latest favorite "family" story would be that of Tom "Flash" Gordon and his son, Dee. To watch Flash's excitement and pride as he cheered on his son during his MLB debut (yes, it was on the reel at ESPN all day) with the Dodgers was something special to watch!

Quite a few come to mind. Obviously the Gwynn family. Another is the Howe family in hockey, and though only cousins the Thorntons of the Sharks.
Who could forget that the Mariners were also home to another three generation family in the Bell's with David playing here.

Acouple others from baseball I liked were the Forsch's and the Niekro's.

Going outside the box. The Armstrong family in pro wrestling. Specifically, still in the territory days, in the Southeast. The Patriarch, Bullet Bob, Armstrong. Sons Brad, Scott, Steve, and Brian. Met them all. Nice to their fans.

The Andrettis in motor racing.
The Hills in UK horse racing,trainers and jockeys.
The Broads in English cricket.
The Neville family in the UK, Phil and Gary played football for England many times,sister Tracy is an English netball player and the Dad is called Neville Neville.

Love the responses... I'm considering putting a small PC together of a lot of these families. So many great names:

lifetimetopps - the 4th family are the Colemans... Joe, Joe, and Casey.

Next post will be up in an hour or so... right now I'm updating the point totals, since I forgot to do it a couple of days ago. No more points will be awarded for this particular post. Have a great weekend.

Seriously no Pete Rose and Pete Rose Jr. Fans out there. even with the son being errible his dad more than made up for it.

Until a few years ago Dad's 4256 hits and Son's 2 hits stood as the most for a father/son duo. Damn Griffey.