Woke up on Saturday and headed over to Branham High School for my first flea market trip of 2023... and the first one since the start of the school year.  As soon as I walked out the door, I kind of regretted it.  It was in the high 30's and knew there was a good chance the cold would scare away vendors.  I was right.
There were only thirty to forty vendors set up, but the good news is four of them had sports cards.  I was tempted to make a reasonably sized Junk Wax Era purchase that included a 1987 Fleer Update tin set and several hundred 1987 Fleer Star Stickers, but the guy wouldn't budge on his prices.
I did find a few things to buy from two of the other guys.  None of them were great bargains... but each were purchases I could live with...
Purchase #1:  Pete Rose Record Record  $3
There was a vendor I hadn't seen before with tubs of stuff ranging from old magazines to sports books.  He also had a display case filled with cards including a graded Tom Brady rookie card and some vintage hall of famers.  I tested out his prices by asking about his 1990 Score B&W Bo Jackson, but his $3 price tag was a little too high.
I moved on to his bin of books that also contained a cereal box.  There was a pretty cool Los Angeles Lakers Wheaties box from the 80's, but it was banged up.  I continued to dig through the bin, when I stumbled across this: 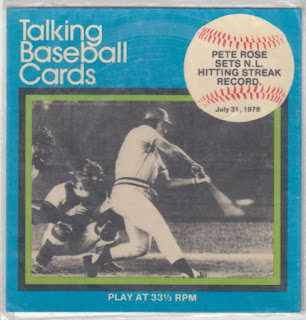 1979 CMC Talking Baseball Cards #4
It looks like a CD cover or something, but it's actually a record.  If you were around in the 70's or early 80's, you might remember companies printing records inside of magazines.  They're much flimsier than a normal LP as they were printed on very thin paper/vinyl.  Anyways... this card kind of reminds me of one of those magazine records.
Based on what's printed on the back of the record, I'm assuming it talks about Pete's 44 game hitting streak back in 1978: 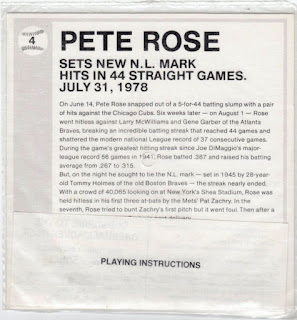 This record is still in its original packaging.  However it's missing the upper flap.  This is the kind of oddball stuff I enjoy adding to my collection.  The vendor said I could have it for $3... which I thought was reasonable and there you have my first flea market purchase of the year.
Purchase #2:  90's Baseball Cards Magazines  $5
I continued digging through the vendor's bin and I came across a stack of Baseball Cards magazines from the early 90's.  He also had issues of Beckett Baseball, Sports Illustrated, and Ring, but I focused in on these because they still had the uncut strips of baseball cards.
Did I mention I like oddball stuff?  Anyways... here are the three issues I purchased along with the cards (that I've already removed from the magazines): 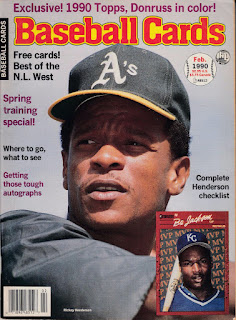 BC10 - BC12
This issue's cards featured the best National League players from the West.  Obviously, I would have rather seen Gwynn replace Alomar or one of the Astros.  At least they gave the Padres a card.  The Dodgers were shutout.
As always... I'll eventually sit down and read this issue from cover to cover.  Maybe I'll find something interesting.  If I do, maybe I'll write a post about it. 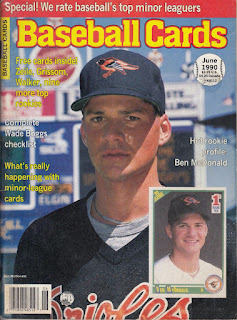 Baseball Cards June 1990
The next issue featured the hot rookie of 1990: Ben McDonald, so it's not too much of a surprise that this issue's cards focused around the top rookies:

#31 - #33
Like the Rickey Henderson issue, this one once again utilizes the 1969 Topps design.  They Cardinals and Expos cards are error cards... with the incorrect teams printed on the backs.

#34 - 36
I remember hoarding Todd Zeile and Marquis Grissom cards back in the early 90's.  I wish I would have focused on Larry Walker a little more.  He's the only guy featured that went on to have a hall of fame career. 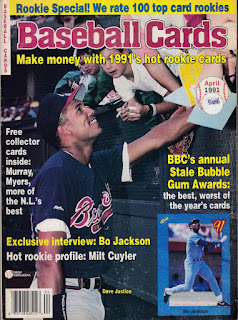 Baseball Cards April 1991
I'm pretty excited to read the Bo Jackson interview as well as see which cards won the Stale Bubble Gum Awards.  It'll also be interesting to see how many of their 100 top rookies panned out.
This issue is from 1991, so they switched up designs and used the 1966 Topps baseball card design.

#19 - #21
Todd Zeile makes his second appearance.  I'm sure back in 1991, I would have been stoked to add that card to my collection.  The San Francisco Giants Rookie Stars card stands out the most thirty-two years later.  I actually remember watching Decker and Leonard play in San Jose in the late 80's.

#22 - #24
The Santiago is pretty cool.  He was an all-star for the Padres for several years.  But the Eddie Murray is definitely the coolest card in this issue.  The back of his card mentions he hit .330 in 1990.  I knew he could hit home runs, but didn't realize he competed for batting titles too.
Okay... I've spent way too much time talking about these magazines.  Let's move along to my third and final purchase... 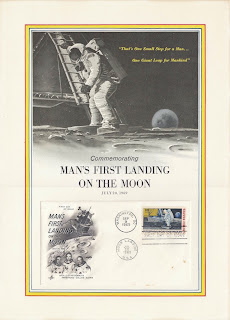 1969 #C76 10¢ Moon Landing First Day Cover
After spending almost thirty minutes looking through the collection that contained the 80's Fleer cards and walking away empty handed... I started walking back to my car.  One of the regular vendors with cards was on my way out.  I had looked at his stuff earlier and didn't see anything worth purchasing.  But this time around, I saw this cool postal cachet commemorating the 1969 Apollo 11 mission where Neil Armstrong, Buzz Aldrin, and Michael Collins landed on the Moon.
I wasn't born yet, but since I was little... I've been interested in things related to NASA.  This poster was originally housed in a wooden frame, but it was coming apart.  I picked up a new one for a little over $20 on Amazon, so technically I'm into this poster for more than $3.  When it arrives, I'd love to hang it up in my office... but it'll probably end up in my classroom.
Well that wraps up my first trip to the flea market in 2023.  I only walked around for about an hour... which is way longer than I originally anticipated.  I would have been in and out in 15 minutes if it weren't for the guy with the bins and the guy with the 1987 Fleer Update tin set.
I actually have one more post related to this past Saturday... but I'll have to share it another day.
Happy Tuesday and sayonara!
Posted by Fuji at 3:00 PM

Pretty interesting. I've never been to a flea market that had cards.

Can't wait for you to rate those top 100 rookies and see who panned out, sounds like a post too!

The Angels In Order said...

Randy Myers is sporting a heck of a mullet in that last group of cards.

Nice magazine pickups! I like picking up the individual cards from those once in a while.

Sweet! Would have loved to join you. Nice oddball stuff for sure!

Not sure what I like more, the Pete Rose record or the moon landing first-day cover. I'll say both. Very cool finds, Fuji!

Looks like another enjoyable day at the flea market!

Having never read Baseball Cards, was most of the magazine filled with the usual (for the time) price guide?

Reading an old copy of a hobby mag cover to cover....I like that.

Going to give it a try myself this year.

Hope you had fun. Some fun oddball stuff.

I think Baseball Cards a monthly hobby magazine I regularly read, because it seemed to be more available at the newsstands in supermarkets, where Beckett Baseball Card Monthly was still kind a of hobby exclusive publication.

There was the newsprint portion that was devoted to a price guide, but there were product previews, columns and articles on what was going on in the hobby.

There were lots of ads from the big dealers around the country to the small timers looking to make a buck in the junk wax era.

Baseball Card Magazine always was inferior to Beckett in terms of content, but I loved the free cards. They made one of Ray Lankford that I love. Great find.

the diamond king - if you're ever in the bay area on the first or third saturday of the month, shoot me an email and i'll take you to one. they're hit or miss... but sometimes you can find some gems

johnnys trading spot - lol. i flipped through it and only recognized a few names. but i'll try and hammer out a post for you.

the angels in order - yeah, as much as i enjoy reading old card magazines... i wouldn't have paid a quarter for them without the cards

jeremya1um - such a great era of cards... but not so much for hairstyles

dennis - me too. i usually will only pay up to a quarter if they're already cut... but will spend up to $2 for complete and clean magazines. these magazines were pretty beat up and a few of the cards were creased.

sumomenkoman - one of these days we'll meet up at a flea market. just not sure if it'll be northern or southern california :D

bbcardz - i went to the rose bowl flea market once a few years ago. it was pretty huge. loved all the vintage clothing. there were also a ton of dodgers bobble heads... and a few guys with cards. i'd like to make it back down there at some point.

gregory - thanks. both were unique collectibles that i was unfamiliar with before last weekend. if you're interested in either, they actually are very affordable on ebay

the lost collector - it was cold, but nice to get out there and look for treasure. there's another flea market next weekend at a different location. hopefully the cold doesn't scare away the vendors there too

matt - if you don't include the 1989 ljn topps talk cards, my first encounter with cards that are also records were the 1964 auravision. i picked up a koufax at another flea market 11 years ago. they're very affordable and pretty cool.

jon - i'd say baseball cards is closer to tuff stuff than beckett, but it has way more ads. i started flipping through the rickey issue and i'd say over 50% of it was advertisements. the articles tend to be very short and the price guide is limited, since there weren't a lot of sets (compared to these days) up to that point. but like the older becketts and tuff stuff price guides, they list all of the big names. there was also a very complete rickey henderson checklist included in that issue

bamlinden - it's more like looking at ads, instead of reading articles. there are lots and lots of ads. but i received a bunch of tuff stuff magazines for christmas. they have much better articles. and when it comes to longer, more in-depth articles, i'd recommend beckett

laurens - the one card newsprint i remember was sports collectors digest. they were pretty unique. i'll have to keep my eyes peeled for the baseball card monthly ones. although my main interest in them are the cards. the articles are a bonus. but as you pointed out, they are mostly ads

dayf - thanks. this blogger can never have enough reader approval.

the snorting bull - agree 100%. i think when it comes to articles, beckett is the best. they are very in-depth. i also like tuff stuff articles, because they're short one page reads. baseball card magazine is more about ads... and like you pointed out, the free cards.