I'm still alive and so are the San Diego Padres.
Same story as before.  Things are hectic around here... but I actually made it a priority to watch Game 3 of the Mets and Padres series.  I didn't catch the entire game, but I watched most of it. 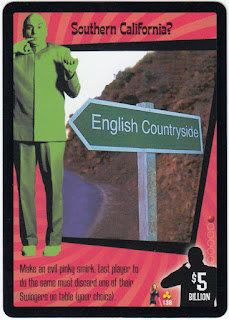 1999 Decipher Austin Powers CCG #138
I'm pretty stoked about the Southern California showdown... although I doubt I'll be able to watch Tuesday or Wednesday's game against the Dodgers.  I'll be checking the box scores on a regular basis though.  The Los Angeles Dodgers dominated the Padres during the regular season... winning 14 out of 19 games.  But hopefully the Padres can build on their one game win streak... and give the best team in baseball a run for their money. 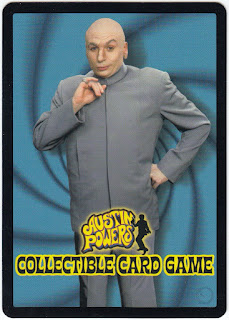 It's unlikely... but a fan can dream.
As for me... I have a few posts in the works.  One is a flea market haul.  The other is a post recapping a hangout involving a Dodger fan.   I'm also hoping to write a post based on this pack of cards sent to me by Reader X: 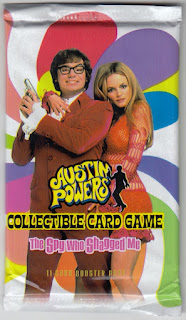 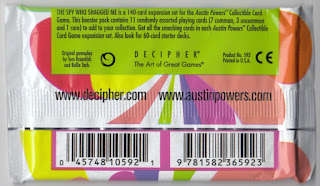 1999 Decipher Austin Powers CCG
He actually sent me two packs.  One went into my unopened pack collection.  The other will eventually be covered over on A Pack To Be Named Later.  Thanks Xavier!
Until my next post... let's go Padres!
Happy Tuesday and sayonara!
Posted by Fuji at 3:00 PM

Email ThisBlogThis!Share to TwitterShare to FacebookShare to Pinterest
Labels: a pack to be named later, ccg, non-sport, san diego padres, thank you

Let's piut the Braves and Padres together for the NLCS. Sounds good to me.

Awesome!!! Always wanted some of those Austin Powers cards

I didn't think you weren't, but it's still nice to hear from you anyway :)

Big game tonight! A dodger win would be groovy

Looking forward to the pack. I was put of college when it was released, but if it was out a couple of years earlier I would have seriously considered buying some of it.

Wow!!! Amazing the Padres did it, they beat the number one team.

I caught the last half of the last two Padres games vs. the Dodgers too. I was hoping they would make it even though I really was ignoring baseball (again). Now I might watch them go all the way - hopefully!

I am glad that the Padres won the series against the Dodgers. Three former Durham Bulls on the roster (Cronenworth, Snell, and Myers), so I am all in on the Padres winning the Series. As for Austin Powers, I had a break from school last month and found myself rewatching a lot of 90s movies. I watched all three movies. Still funny 20 years later.

dennis - this series between them and the phillies is really good. hope we bounce back and tie it up today. let's go cronenworth!

johnnys trading spot - sorry about the braves. at least you got your ring last year. padres fans are still hoping for their first world series title

matt & jafronius - been super busy. hope to open up the pack and share it with all of you before thanksgiving

sumomenkoman - you should add a box to your collection. i checked and they're only around the price of a blaster

gcrl - can't believe the padres took down the mighty dodgers. i had the dodgers picked to win it all

rr - i know. can't believe it. hopefully they can come back and take down the phillies

gca - the padres postseason has been pretty exciting. my friend's son who is in kindergarten has even started rooting for the padres ;D

the snorting bull - i have to go back and watch them. just noticed they're all on netflix. maybe i'll binge them one of these weekends