I've always considered myself a pretty consistent guy, who doesn't embrace a lot of change.  When I find something I enjoy... I often become a loyal fan.  McDonald's French fries, Olukai flip flops, Apple products, Honda/Toyota cars, the Beastie Boys, and Chobani Greek yogurt are all examples of things I've stuck with since I started enjoying them.

When it comes to collecting and the big card companies... I've always been a Topps guy.

But recently... I snuck behind Topps' back and started checking out early 50's Bowmans.  The 1951 design is my personal favorite with the player's name written in white font inside of the black box.  The paintings used for this set (along with the 1950 and 1952 sets) are absolutely gorgeous.

Unfortunately the idea of building this set is nothing more than a pipe dream as it contains two rookie cards I'll never be able to afford: Willie Mays and Mickey Mantle.

That being said... I set out to add a couple of examples from this set.  It didn't take me long to target two specific cards: #31 and #134.  Both cards depict hall of famers... and utilize two of my favorite paintings from the set. 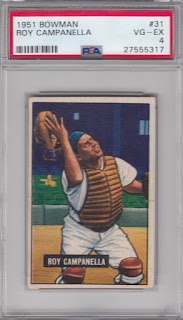 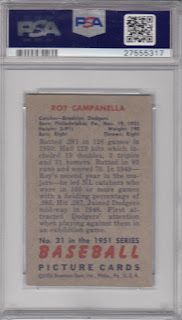 Who doesn't appreciate a piece of cardboard featuring a catcher peeling off his catcher's mask as he focuses intently on the pop fly?

I've been targeting a Campanella since the beginning of summer, but I couldn't find one I liked within my budget.  Then two weeks ago, I decided to take advantage of a 10x eBay Bucks offer and picked this card up for $81 (+ $4 shipping).  I also had $52.58 remaining on one of my $100 eBay gift cards, so I actually paid $32.42 for this card.

Here's the other vintage Bowman I recently added to my collection:: 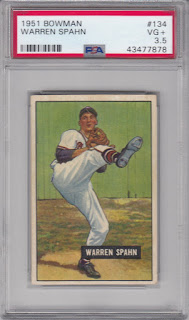 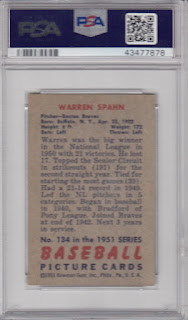 This was the card that inspired my hunt for a couple of 1951 Bowmans.  The painting featuring Spahn winding up is fantastic... and was a little more affordable than the Campanella.  I purchased this card back in July for $47 (free shipping).

Now that I have both of these cards, I'll be putting future Bowman purchases on the back burner.  I still have three $100 eBay gift cards remaining, so I'm going to try and target a 1973 Topps set to finish off the run of 1972 to 1987 Topps sets.  The other thing I'd like to do before the end of 2019 would be add another 1956 Topps hall of famer to my collection.  In other words, I'll be heading back to my childhood love.


Do you happen to have an all-time favorite trading card company?

If I had to pick a company outside of Topps, I'd go with Upper Deck.  I miss them not having an MLB license.  Hard to believe that it's already been ten years since Topps and MLB signed an exclusive contract.

Hopefully in ten years, I'm still around collecting... and MLB has ended their exclusive relationship with Topps.

Well today kicks off The Long Haul.  Between now and Thanksgiving break, there's only one holiday.  Fun... fun... fun.

A few weeks ago, Gavin over at Baseball Card Breakdown asked his readers if they had any suggestions for dealing with scratched plastic card holders.  Since I deal with graded card holders, this caught my attention and I decided to do a little research on the issue.


I watched a YouTube video where a guy removed a scratch from a graded comic book holder using a plastic polish kit from Novus.  I picked it up off of Amazon and tried it out on my 1951 Bowman Campanella.  Here's a look at the before and after images: 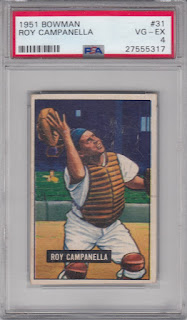 It's hard to tell, but when I received this card... the holder had a bunch of tiny scratches.  After spending about ten minutes buffing and cleaning the plastic, it ended up coming out pretty clean.  I've already cleaned up three other graded card holders.

I'm not going to say it'll remove every single scratch, but it definitely does the job on lighter scratches and was a solid investment.
Posted by Fuji at 3:00 PM