Jackie Robinson retired sixteen years before I was born and I was less than two months old when he passed away.  But his legacy is one that I have embraced ever since one of my middle school teachers preached about him during a civil rights unit.

Anyways... I figured it would be fun to read up on #42 and see if I could connect him with my favorite player of all-time... Mr. Anthony Keith Gwynn Sr. 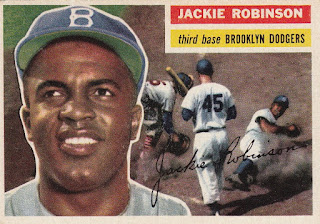 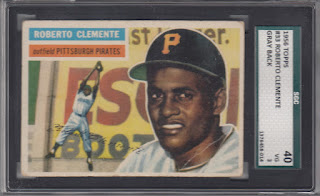 Standing out in right field for the Pirates was a twenty-two year old Puerto Rican by the name of Roberto Clemente.  Two weeks before Robinson passed away, Roberto Clemente played in his final MLB game against the Cincinnati Reds and The Big Red Machine in Game 5 of the 1972 NLCS. 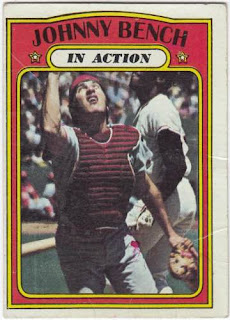 The Reds were down by a run heading into the bottom of the 9th, but Johnny Bench led off the inning with a home run to tie the game.  Later in the inning... they scored another run to end the Pirates' season. 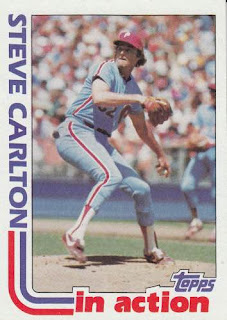 But don't let those twelve home runs give you the wrong idea.  Carlton was one of the best pitchers of his era.  In fact in 1982, he became the first pitcher in MLB history to win four Cy Young Awards. 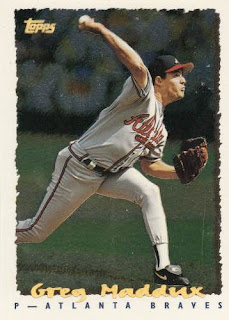 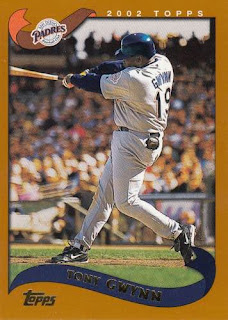 And connecting the last link in this game of Six Degrees of Separation... is my favorite player of all-time.  How are Greg and Tony connected?  Well... they both played for the San Diego Padres... but not at the same time.  They started three MLB All-Star Games together, but that's kind of a stretch.  I'm a huge fan of both of these guys and collect both of these guys' cards... but that's not necessarily a baseball link.

So let's go with this very cool statistic.  The Professor struck out 3,371 batters over his twenty-three season career and faced Mr. Padre one hundred seven times.  Guess how many times Gwynn struck out.  Go ahead.  Guess.  If you said "zero"... pat yourself on the back.

Gwynn collected thirty-nine hits, drew eleven walks, and had a career batting average of .415 against Maddux.  Impressive, no?

Well there you have it.  Jackie Robinson to Tony Gwynn.  It's amazing how much information has been documented on baseball-reference.org.  I had a lot of fun researching this post.  There's just so much interesting baseball trivia out there.  My goal is to turn this into a series, which will give me a chance to show off some cards, while learning a little bit about the sport we all love.

Anyone else up to the challenge?


If so... leave a link to your post down below.  I'd love to read some of the connections you produce and I'm sure others would too.  C'mon... who doesn't love a little Blog-Bat-Around?

Let me guess... you need an incentive.  Okay.  Let's turn this into a contest.

Everyone who participates gets one entry.  If you mention this contest in your post, I'll give you an extra entry.  The prize?  How about a small flat rate shipping box filled with baseball cards and wax packs?  And if we can get 20 participants... I'll award two prizes.

Since a lot of us are on tight schedules... I'll run the contest throughout the month of February.  That gives you guys a little over three weeks to produce a post.

Happy Thursday and sayonara!
Posted by Fuji at 4:00 PM

It does sound like a challenge. We'll see. and hey there's an extra day this month.

Great post! 0 strikeouts in over 100 plate appearances is impressive enough against any major league pitcher, but against Maddux? it just boggles the mind. I wonder which guy got the benefit of the doubt from the umpire on borderline strikes?

As a blogger who knows writer's block all to well, I dig this idea.
I hope it'll be a contest, but it'll be fun to try either way.

This could turn into a series. Try to connect any two players.

Actually, we can make the link in three moves:

Lest you think I am some genius, Baseball Reference has a feature they call the Oracle of Baseball that does the whole Kevin Bacon thing.

Good idea! I decided to do one:

Great idea hope I can get one out by end of the month. Would be worth it to win just to get a Fuji card :-)

shoeboxlegends - thanks... hopefully others will join in on the action

brian - great question. two first ballot hall of famers... not sure who'd get the call.

stealing home - do it bro! the more the merrier.

gca - i hope you do. thinking about making it a series myself

carlsonjok - yeah, i remember seeing that feature a while back. but i'm glad i didn't use it this time around. i learned a few cool things during the writing process.

angus - thanks for participating. you did a great job!

steve - i'll send you one of my cards either way... but i really hope you'll write up a post.

Hope it's not too late - here's my 6 degrees post:
http://alltradebait.blogspot.com/2016/02/six-degrees-of-blogging-separation.html

This was a challenge, but mission accomplished: http://1975baseballcards.com/1975-baseballs-six-degrees-of-separation-fuji-style/