Winter has officially arrived to the Bay Area.  Or at least it felt like it on Saturday morning, because it was super cold.  The kind of cold where you want to lay in bed, turn on the electric blanket, and go back to sleep kind of cold.

However... the De Anza Flea Market only comes around once a month, so I threw on a hoodie, picked up some Starbucks, and made my way out there.  There were a lot of vendors set up.  Probably the most I've seen in awhile, although it seemed like half of them were selling holiday decorations or stocking stuffers.  Thankfully there were a handful of vendors with sports cards sprinkled in here and there.

One of them was a friend who had a small stack of vintage in his display case.  Five dollars seemed a little steep, but he's taken care of me in the past and it was my turn to return the favor.  At least they're two guys I've actually heard of and are in decent condition for being nearly six decades old.

Last month was National Bullying Prevention Month and one of the YouTubers I follow is participating in an anti-bullying read-a-thon.  I figured I'd join in and read one of my childhood favorites.

I'm always on the lookout for the random first-time vendors with boxes of cards hidden among all of their other items... 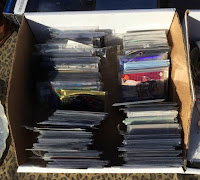 This box was filled with 90's inserts, parallels, and the occasional autograph.  Most of the cards had card shop price tags from back in the day, which wasn't a good sign.  I was relieved to hear that the sets were only five bucks and singles were one to two dollars each.

A few months ago... I would have spent $20 to $30 with this guy.  But I decided to save my money and only pick up cards that really stood out to me.

If you collected baseball cards in the early 90's... then you remember Mr. Taylor.  He was the first pick in the 1991 MLB Draft and Baseball America's top prospect before the 1992 season.  I'm sure this card was on plenty of peoples' Hot List.  These days he's considered one of the biggest busts in MLB history.

On the other hand, Griffey was one of the best players in baseball during the 90's and this particular card is both unique and hard to find.

It features a dial that spins around and shows off the number of home runs Griffey hit during different seasons.  Fifteen years ago, Pacific inserted these in their Prism packs at a rate of one per 193 packs.  That's a little more than eight boxes!

That's not a misprint.  Three packs for a quarter.  I have no idea what these are... but they're trading cards at 1970's wax pack prices.  Stay tuned.  I'll be busting these sooner than later. 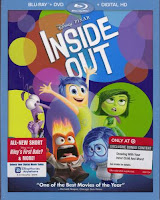 And wrapping up my day at the flea market was the most expensive purchase of the day.  I don't usually purchase new movies... but this is one of my favorite movies of 2015.  The sad thing is...

This single purchase exceeded all of my other purchases combined... and that includes the $2.50 churro.

If you're interested in winning a cool sports print of one of your favorite athletes... head over to Sport Card Collectors.  Click Here