Another year has come and gone and the 36th Annual The National Sports Collectors Convention is officially over... and I'm totally envious of the thousands who were fortunate enough to attend.  I have never been to THE GREATEST SHOW ON EARTH.  And although it's on my bucket list, I'd say that there's maybe a 50/50 chance that I'll actually go during my lifetime.

The fact is... it's way too expensive for this particular collector.  I considered flying out to Chicago this year, since my summer school session ended earlier than normal.

But here's a breakdown of my expenses if I had left Thursday morning and flew back after the show on Saturday:

These prices were based on the most cost effective prices out there when I started researching this trip back in June.  Remember... I live on a teacher's salary and I pride myself on being a bargain hunter who enjoys digging through dime boxes and wandering around flea markets on weekends.  With that being said, the little journey projected to cost a little over $900 and thad didn't include any spending money.

Now depending on the individual... that could be a considered a bargain, a fair price, outside of a person's budget, or somewhere in between.  For me... it's somewhere between a fair price and outside of my budget.

Anyways... the point is, I had the extra money.

But to be honest... attending The National wouldn't exactly have been the best use of my money, which is why I decided to forgo the cardboard camaraderie and cool memories.  Instead... I chose to live vicariously through the YouTubers and bloggers who attended.

It was the cheaper and wiser alternative.  And with the extra money I was able to purchase a few nice additions to my collection: 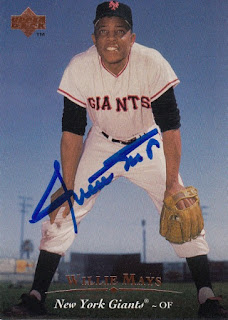 I have always wanted an autographed card of Willie Mays and this is one of the most affordable options out there.  It's the fourth card I've acquired from this five card set.  I also have the Reggie Jackson, Frank Robinson, and Roger Clemens:

One of these days, I'll complete the set with the Raul Mondesi.  Unfortunately I haven't found a reasonably priced copy... yet.

Next up is another Bay Area fan favorite...

It's not what you think.  I haven't suddenly jumped on the bandwagon and become a San Francisco Giants fan.  I just happen to really love this autograph set and Posey is one of the short printed autographs in the set. 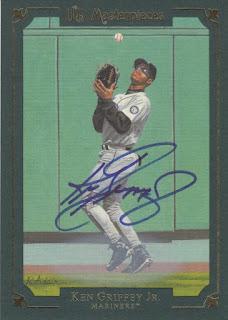 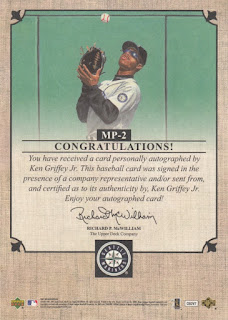 
It's big.  It's beautiful.  It's on-card.  And it's finally mine.  UD Masterpieces is arguably one the greatest sets in the past decade and I've wanted one of these box topper autographs for a while now.

Don't worry, I happened to have an extra 5x7 toploader laying around so storage isn't too big of a concern.

And finally, The Great One... 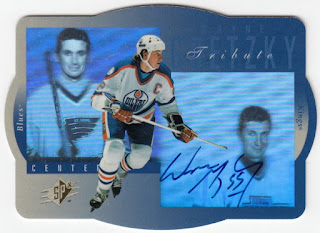 This is one of those cards, I never thought I'd actually own.  When this card was released, I was making less than $10/hour working at a preschool and these cards were commanding top dollar.  Two decades later... it's one of the most affordable, hard-signed, pack pulled autographs you'll find of Wayne Gretzky.

Well that's it for now.  I hope all of you who attended had a lot of fun.  Like I mentioned earlier... I'm very jealous.  Maybe one of these days I'll end up fulfilling my dream of attending.  On the other hand... maybe I won't.  We'll just have to see which path the Cardboard Gods lead me down. 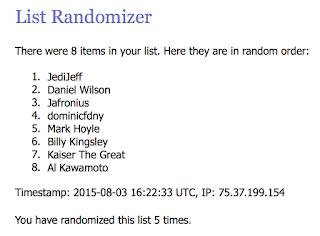 Oh... one more thing.  Congratulations JediJeff... you won the 1987 Leaf Special Olympics set.  I'll add it to your care package that I'll be shipping out in the near future.
Posted by Fuji at 3:00 PM