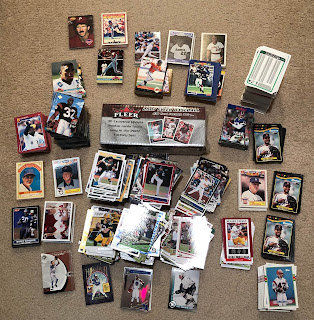 If variety and/or sets are your thing... then this post is for you.  Last week, Woody over at Card Collectors World and Sports Card Forum sent me this huge box filled with cards: 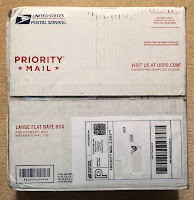 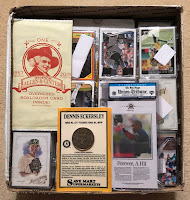 There was sixteen pounds worth of cool items for my team collections as well as over fifteen different sports card sets.  Earlier today, I spent over three hours going through the box and scanning cards from a few of the sets.

My original plan was to do a Saturday Night Five post, but I changed my mind at the last minute.  It's just too challenging to narrow things down to my favorite five.  Instead, I'm just gonna show off a variety of sets in no particular order...

I was blown away when I saw this set sitting inside of the box.  Back in 2005, I wasn't collecting so I pretty much missed out on grabbing these rookie cards.

This is such a cool set.  My goal is to do a Set Showcase post on this set at some point.

Remember the thirty-three card box sets Topps produced back in the 80's?

I know I've mentioned it either on my blog or other bloggers' blogs... but my goal is to one day collect all of the Collect-A-Books from the different sports and display them in a binder.  Woody hooked me up with all thirty-six NFL books from the 1990 set.

I'd love to one day collect the full run of Topps Glossy All-Stars that were distributed in rack packs from 1984 to 1991.  Each set contained twenty-two cards featuring the starters, managers, and honorary captains from each league.

Topps dropped the ball when they left out guys like Troy Aikman and Barry Sanders out of their 1989 football set.  Thankfully they ended up piling them into their Traded set.

What color are these borders?  Purplish maroon?  Whatever color it is, I like it.

Another updated, final edition, rookies and traded type of set.  This one features three first ballot hall of famers.  Not too shabby.

Much like those Topps Glossy All-Stars... the goal is to one day own the entire run of Toys R' Us Rookies sets (1987 to 1991).  Unlike the Glossy All-Stars, Topps released these as part of thirty-three card box sets and changed up the border colors each year.  Black borders were used in the 1987 and 1991 sets.

Well that's all I have for you today.  Thank you Woody for this very generous box of cards!  By the time I'm finished sorting them, I'm guessing it will have provided at least six, seven, maybe even eight hours of entertainment.

As for the rest of you, let me know if you'd like to see a Set Showcase post on any of these sets.  And speaking of sets... is there anyone else trying to build the 2019 Topps Chrome baseball set?  Here's my current wantlist: 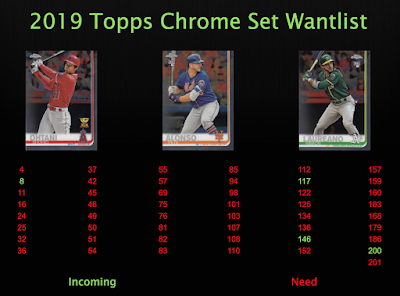 I have about 100 doubles available for trade, so email me your wantlist if you're interested in trading.

Happy Saturday and sayonara!
Posted by Fuji at 6:00 PM