Not So Local Card Shop

According to Google, the nearest baseball card shop is 13.8 miles from my doorstep.  The last time I shopped there was way over a year ago.  It's probably been closer to two or three years, but distance doesn't have anything to do with it.  It's their card prices.  I completely understand that they need to make a profit to pay the bills, but I have bills to pay as well... which is why I've been mostly a bargain hunter ever since I reentered the hobby a little over a decade ago.

One of the places I hit up for deals is an online card shop that's roughly 2,400 miles away from me.  A few days after my birthday, I checked out their inventory and found a few cards for my team collections, a few singles for my "sports card time capsule", a cool 1 of 1 for my hockey collection, and a great deal on this autographed card: 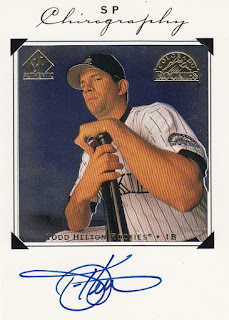 Helton is one of the greatest players in Colorado Rockies' franchise history.  I was surprised at how little pack-pulled on-card autographs he has.  I was even more surprised to see the four dollar price tag on this card.

Next up are a trio of autographs for my team collections:

These three cards added $10 to the running total, which isn't exactly a great deal.  However there's plenty of upside for these three rising stars.

Here are a pair of singles for a project I'm currently working on:

I purchased the Hudson for $7 and the Marte for $2, which brings my total purchase so far up to $23.

I'm planning on putting some cards (and possibly packs) into a box and sealing it up for one or two years... then opening it up and seeing how much their values have appreciated or depreciated.  As soon as I add a few more items to the box, I'll seal it up and write a post about them.

And finally here's one of those Vault 1 of 1 cards: 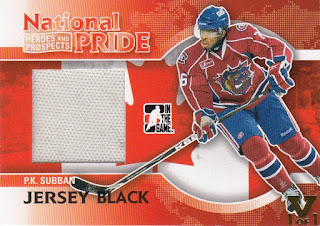 This card matched the Dakota Hudson as the highest priced cards in the purchase.  Like I mentioned in yesterday's post, I don't really buy many hockey cards anymore, but I really like Subban and his passion for the game.  When I saw this card, I thought it would contain a piece of his Team Canada jersey, but it actually features a jersey swatch from his from his OHL days with the Belleville Bulls.

There were three more cards I added to this order, which when you tack on shipping brought the price to an even $40.  At the time of purchase, I was really eager to pull the trigger and make this purchase.  However after breaking things down in this post, it doesn't quite look like a bargain anymore.

Oh well... too late now.  It's not like I can hop into my car, drive to this not-so-local card shop, and ask for a refund.  Wait.  Do local card shops even offer refunds to customers with buyer's remorse?  Probably not.