When Sadaharu Oh hit his 756th home run to pass Hank Aaron for the world lifetime home run record on September 3rd, 1977... I was only five years old and over 5,000 miles away.  But word traveled across the Pacific Ocean and eventually hit my ears (although it might have been a few years later).

And like Babe Ruth and Hank Aaron, Oh became one of those larger than life sports figures.  Fast forward a few decades and somehow I stumbled across his 1975 Calbee #1315 baseball card and decided to add it to my most wanted list.
I've been racking my brain thinking about where the heck I could have originally seen it, but just can't figure it out. 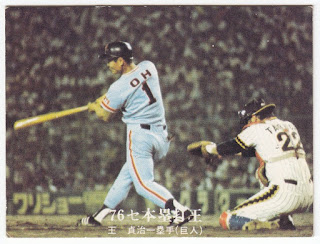 I honestly don't even remember adding it to my most wanted list, but I'm sure glad that I did... because last week Sean over at Getting Back into Baseball Cards....in Japan sent me one for my Japanese PC.

One look at this card and I can understand why I wanted a copy for my collection.  It captures a well-cropped Oh in the middle of his swing... with Koichi Tabuchi of the Hanshin Tigers behind the plate.

Here's a look at the back of this awesome card: 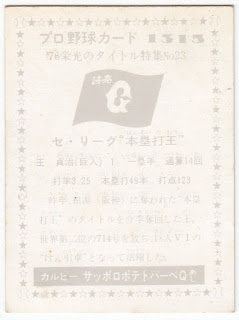 I'm not exactly sure what any of the text says... but I can make out the card number in the upper-righthand corner.

Sean included one more 1975 Calbee card inside of the package: 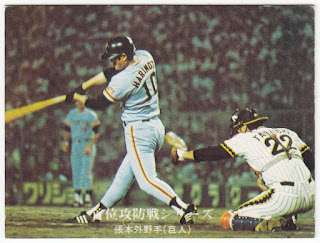 Are you feeling a sense of déjà vu?  I know I did.  Check out the two cards side by side: 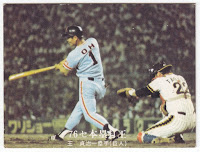 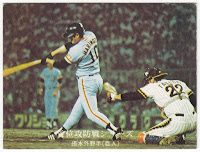 The card on the right features Isao Harimoto with another cameo by Tabuchi.  I feel like this isn't the first time I've seen two cards that look very similar... yet feature different players.

Here's a look at the back of Harimoto's card: 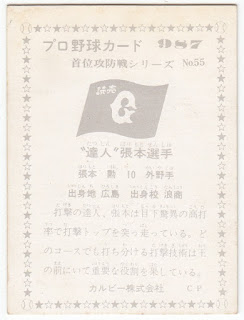 Thank you Sean for adding both of these vintage Calbee cards to my Japanese PC.  As soon as things settle down... I'll scrape together some Montreal Expos for your collection and get them shipped out across the Pacific.

Stay tuned.  The Oh isn't the only card I'll be crossing off my most wanted list this week.  Until then...