When it comes to walking around flea markets, I rarely have an agenda.  It's too hard to try and plan things out, because you never know who or what you'll find out there.  But this past Saturday, I was hoping to find two things:  2019 Topps Chrome singles (for my set) and Pyrex (for my friend).

The only vendor who had any 2019 Chrome was my buddy, but he didn't have any common base cards or the Vladimir Guerrero Jr. rookie card.  As for Pyrex, I found a couple of people selling them... but they were way overpriced and didn't have the designs my friend is looking for.

Luckily the day wasn't a complete wash.  I stumbled across a guy with several boxes filled with cards.  He was one of those guys who inherited a collection and had zero idea of what was sitting in front of him.

Now this scenario usually plays out in one of two ways:

#1:  The guy just wants to dump his stuff, so he's willing to sell it cheap.

#2:  The guy thinks he has inherited gold, which isn't going to be cheap.

Sadly... this guy fell into the latter category.  Luckily he was willing to listen to offers...

After about twenty minutes of sifting through boxes, I pulled out these six cards: 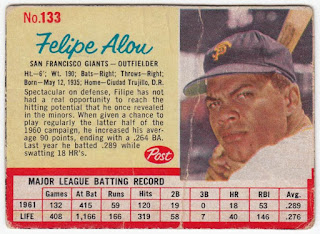 This was the card that originally caught my eye and the reason I invested so much time digging through his boxes. 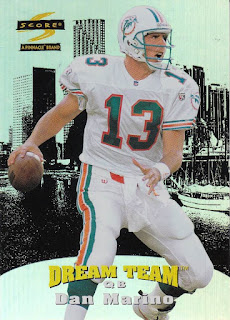 I'm a sucker for 90's shiny inserts... and Marino was always one of my favorite quarterbacks. 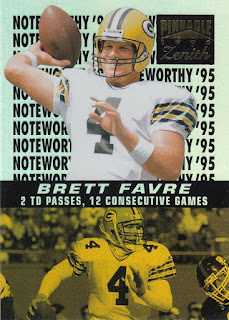 Back in the 90's, Favre wasn't just one of my favorite quarterbacks.  He was my favorite player.  This card focuses on his 12 consecutive games in 1995 with 2 touchdown passes.  I did some digging and discovered only one guy accomplished this feat last season.  Any guesses?

If you said Phillip Rivers, you're a football guru.  Patrick Mahomes and Cam Newton both came close with 11 consecutive games with 2 touchdown passes.

I'll always purchase late 90's/early 2000's gold refractors if the price is right.  I don't know much about Redmond, but he was taken a few rounds before Tom Brady.  Unfortunately, he didn't last in the league very long and his two lone touchdown receptions were thrown by Drew Bledsoe, not Brady. 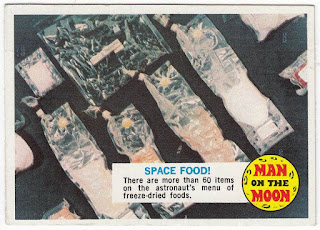 I remember seeing some singles from this set pop up around the blogosphere over the summer, so I added this card to my stack.  I was hoping for a few more, but this was the only one I found. 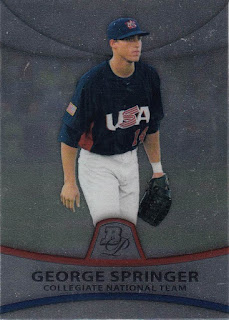 Springer is a stud and this is one of his first trading cards, so into the stack it went.

After standing there and searching for twenty minutes, I ended up six cards.  I handed them to the vendor and he quoted me $10.  Annoyed that I had just wasted 20 minutes of my time, I told him I'd pass.  He asked me what I'd be willing to pay and I said three bucks.  I explained that I wasn't trying to low-ball him or anything.  It's what I felt was a fair offer... and he accepted

After walking away... I had a little buyer's remorse.  50¢ per card seemed a little steep, but at least the 20 minutes weren't a complete waste of time. 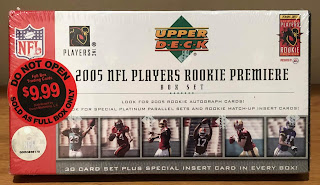 Here's the main reason I purchased this set: 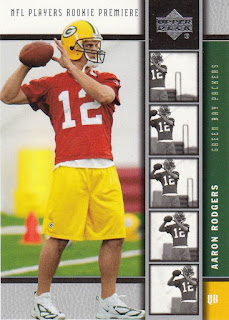 Couldn't pass up the opportunity to add a rookie season card of Aaron Rodgers to my collection for five bucks.

Here are a few cool bonuses I also set aside:

Did you know that Frank Gore is entering this season with the Buffalo Bills with the 4th most rushing yards in NFL history?  If he can somehow manage to rush for 522 yards, he'll pass Barry Sanders on the list.

Well that's it for this weekend's haul.  I told you it was slim pickings, so as a bonus I decided to show off a pack busting session that originated from a flea market haul last month: 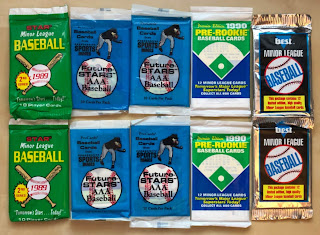 At the Rose Bowl Swap Meet I found a guy that had a tub full of packs priced at 8 for $1.  I pulled out ten minor league packs from the late 80's/early 90's in hopes of finding a Frank Thomas or Jeff Bagwell minor league card.  That didn't happen.

My best pull from these ten packs was this card:

Wakamatsu had a brief stint with the Chicago White Sox as a player back in 1991, but is probably best known for being the Seattle Mariners manager in 2009 and 2010.  This card is a nice addition to my Japanese Athlete PC.

Here are the only other notable cards I pulled from those packs:

Well that's all I have for you today.  Stay tuned... because on Thursday I'll be showing off a card I've wanted for nearly three decades.