The Broder Version of Graded Cards?

If you write about Broders... there's a good chance you'll get featured on This Week in Blogging.  Jay over at Card Hemmorrhage showed off some nice looking Broders last week on his blog.  Unfortunately... my Saturday post ended up being the baseball card version of The NeverEnding Story.  So I had to make some last minute revisions and presto... you have today's post.

I have probably close to one hundred different Broders sitting in a box that I'd love to show off at some point.  But for today, I present to you this not-so-nice looking "wannabe" rookie card of The Kid.
I've been told on multiple occasions that these cards are completely worthless, but the fact is... a card is worth what someone is willing to pay you for it.  And there are actually collectors out there who are willing to pay a few bucks to add this mass produced unlicensed piece of cardboard to their collection.  Just saying.
Getting back to Jay... he recently sent me a padded enveloped that contained what I would deem to be the graded card version of a Broder: 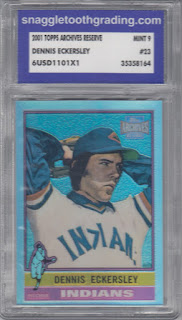 2000 Archives Reserve #23
Okay.  So this card grading company looks to have been legit at one point, but I'm gonna bet the majority of you have never heard of Snaggletooth Grading.  Have you? 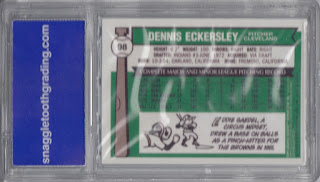 I did some research and it looks like the website might have been up and active in 2002 and 2003, but that's a long time ago.  Just like Broders, there are some collectors out there who don't have an appreciation for defunct grading card companies or the cards they've graded.
Me?  I love this card.  It's a piece of history.  While many collectors would pop this card out of its plastic prison, I have zero intentions of doing so.  My goal is to collect an example of every grading card company slab in existence and I thanks to Jay, I can officially cross Snaggletooth Grading off of my list.
He also sent me some other cards for random collections: 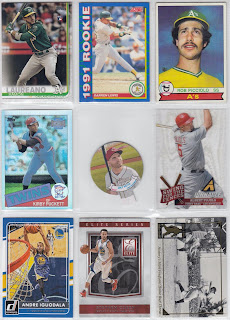 I was very happy to add another Ramon Laureano Topps rookie card to my collection.  He struggled after trying to attack the Astros coach, but I'm confident he'll return to top form next season.
And as much as I avoid purchasing Panini cards myself, that Pinnacle Swing for the Fences acetate insert of Albert Pujols is a nice looking card.  Thanks Jay!
While I'm covering care packages, I received another large padded envelope in the mail last week.  The other one was from Jon over at A Penny Sleeve For Your Thoughts.
Let's start off with the largest item in the envelope: 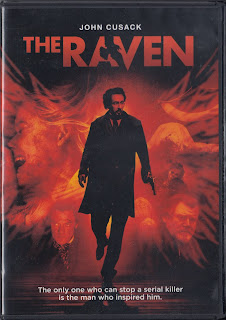 The Raven DVD
One of my favorite things about Jon's blog are his pickup posts where he shares his DVD and VHS purchases.  It reminds me of my days of walking around the flea market before I started hunting for cards. 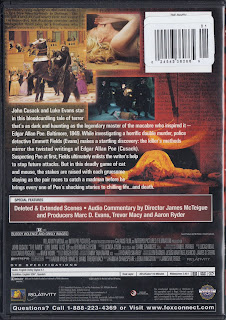 Back in the 90's and 2000's... movies, CD's, and video games were actually the #1 thing on my list to buy at the local flea markets.  I'm sure I'd stop and look at cards, but I don't remember finding too many deals on them.  Used media was a completely different story.
These days, I'll still pick up a DVD or video game if it's cheap and something I really want to see or play, but it's not very often.  In fact... I haven't been to the flea market in over nine months.  Maybe I'll look into walking around the De Anza Flea Market in November.
Getting back to cards, Jon sent me some of those too in the form of set needs: 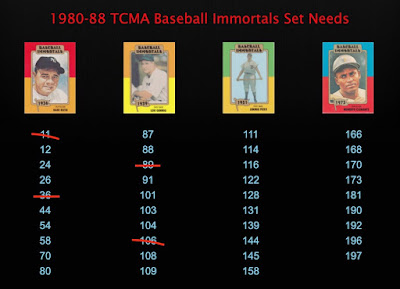 Two years ago, my buddy Woody hooked me up with a nice starter set of 1980-88 TCMA Baseball Immortals.  Over the past twenty-four months, the only four cards I've crossed off my list are the ones sent to me by Jon: 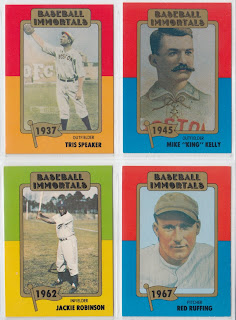 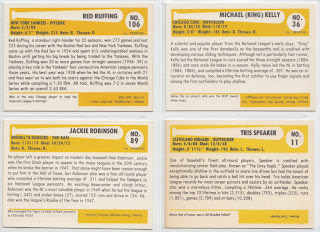 This is one of those sets that I have stored in a binder on my office shelf.  I probably should make a stronger effort to complete it.  Right next to that binder is a binder holding these sets: 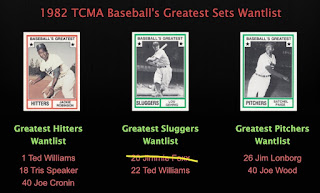 Jon helped me get one step closer to completing the Greatest Sluggers set with this Jimmie Foxx:

1982 TCMA Sluggers #20
Another set that I just need to sit down and finish.  I absolutely love these 80's TCMA sets.  They're like if Broders and Topps Archives hooked up and had a baby.  I mean it in the best possible way.
In addition to these set needs, he also sent me a nice stack of A's, Padres, and Japanese guys: 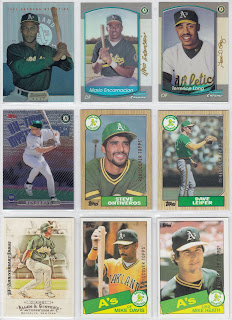 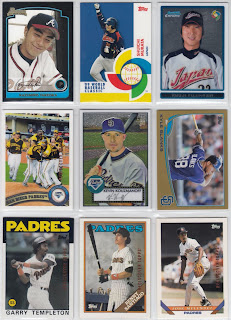 That top row of A's are shiny refractors... and both bottom rows of these pages are buybacks... including the two 1987 Topps A's cards and the 2011 Topps Padres team card in the middle rows.
I tried to pick a favorite and narrowed it down to the Terrence Long Bowman Chrome refractor, the 85T Mike Davis, the 86T Garry Templeton, the 88T Benito Santiago, or the 2011 Padres team card.  They're all awesome, so I'll leave it at that.
Thanks Jon for this very generous care package.  As soon as I sit down and watch The Raven, I'll let you know.  Today is the first day of the second quarter and I spent most of the weekend grading, getting my next unit lined up, and then resting, sorting some cards, and writing this week's blog posts.  Maybe over Thanksgiving break?  Hopefully sooner.
Okay... time to get ready for class which starts exactly when I have this post scheduled to publish.
Happy Monday and sayonara!
Posted by Fuji at 9:00 AM