Sometimes... timing is everything.  I've been sitting on this post for well over a month.  I thought about combining it with other posts like when I wrote about my signed Tony Oliva rookie card back in September.  Ultimately I made the executive decision to hold off and publish it today to kick off the 2020 World Series.
Plus it's the twenty-ninth anniversary of this fantastic play... 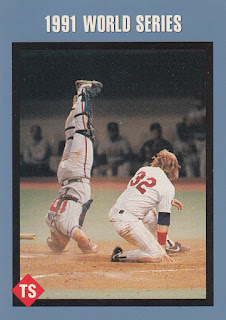 1992 Tuff Stuff World Series Sheet #1
Isn't it awesome?  Okay, technically the anniversary was yesterday and the card design is average at best.  But that photograph is perfect.  Literally... the timing and position of the photographer was perfect.
In fact, you can watch the actual play here:
It took place in Game 1 of the 1991 World Series between the Atlanta Braves and Minnesota Twins during the bottom of the fifth inning.  I'm sure most of you don't have time to watch then entire game, but you can click here to skip to the 1:52:45 mark to see the actual play. 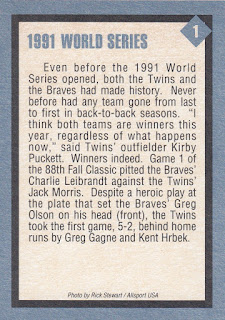 Although I remember rooting for the Braves during this World Series, I don't actually remember this play.  However after seeing this card, I doubt I'll ever forget it.
The card itself came out of this issue of Tuff Stuff: 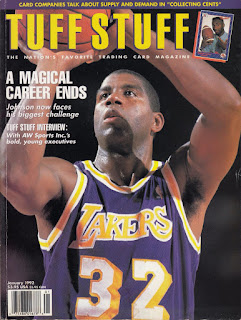 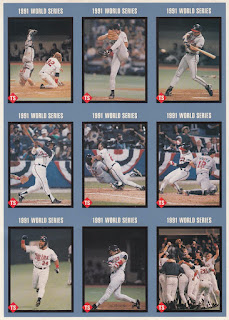 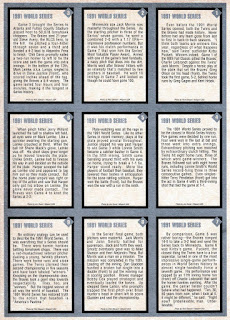 1991 U.S. Playing Cards All-Stars #4D
A week later Kirby Puckett hit one of the biggest home runs of his career and forced a Game 7.

1991 U.S. Playing Cards All-Stars #AH
The next day, Jack Morris pitched a ten inning shutout and the Minnesota Twins won their third and most recent World Series title.
Hopefully this year's World Series will be just as exciting.
Although I was hoping to see the A's and Padres slug it out... it's pretty cool to see the two teams with the best records face off.  Based on my original rankings, I should be rooting for the Rays.  However, I barely know anyone on the team and I really do like guys like Kershaw, Buehler, and Betts.
The bottom line it doesn't really matter who wins.  Neither are the A's or Padres... and thankfully neither are the Yankees or Astros, so let the best team win.
What about you?
Who are you rooting for?  Who do you think is going to win?
I'm predicting the Dodgers win in six games... but I'm hoping it goes the full seven with Mookie hitting a perfectly timed walk off home run to win the series.
That's it for today.  Happy Tuesday and sayonara!
Posted by Fuji at 3:00 PM