One of my friends and I were talking about COVID on Saturday and I mentioned that even though less than 5% of the people who are infected with the virus die... that's still way too many.
And the main reason I'm a firm believer in social distancing, wearing masks, washing my hands, and taking this thing seriously is I truly value my family, friends, and society in general.  But it's also that I can totally picture myself beating the odds and being one of the people getting really sick, having lifelong complications, and that's just not something I'm willing to risk.
On the other hand... I'm totally willing to take a chance on blog contests.  Even though the odds are against me, I'm not risking my life when I decide to enter.
Worst case scenario... I congratulate a fellow blogger.  Best case scenario?  I beat the odds and win a prize.

Back in July, Nate over at The Bucs Stop Here ran a contest where he had his readers predict which sixteen teams would make the 2020 MLB Playoffs.  The person with the most correct picks would win a pack of the highly coveted 2020 Bowman Baseball.

As luck would have it... my guesses were very lucky and I somehow beat the odds, and won the pack of Bowman.
Let's start with the base and Chrome: 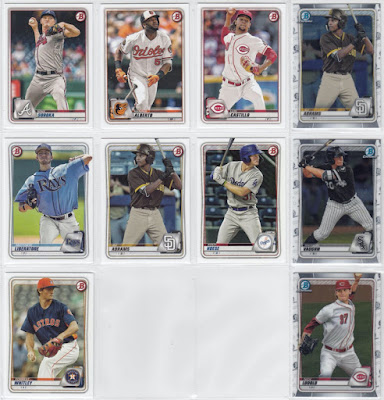 A pair of Padres was cool to pull.  And a look at the rookies and parallels... 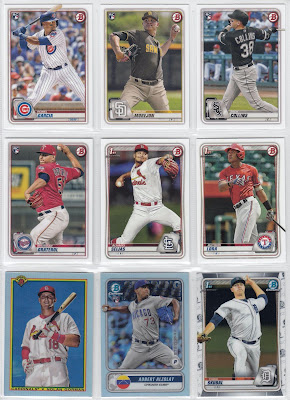 Can't really say I know much about any of these guys (even the Padre)... but that's the beauty of Bowman.  I'll have the next three to five years to figure out whether or not this pack beat the odds.  Maybe I just pulled the next Mike Trout or Mookie Betts.  We'll have to see.
Thank you Nate for the contest!  As a fan of rookie cards, I look forward to seeing if any of these guys make it big. 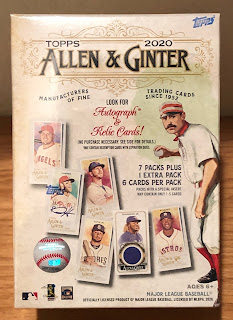 After opening up the pack of Bowman, I also had the opportunity to bust open a blaster box of 2020 Allen and Ginter.  On Friday, my friend stopped by while I was teaching and left it on my porch.  She said it was a belated birthday present.
Most of my "non-collecting" friends know that I collect cards... but I don't really advertise this blog.  I'm wondering if she reads it, because I just recently wrote about these blasters being sold on Target's website.
Anyways... I thanked her, but didn't ask if she read about the box on my blog, just in case she didn't.
By now we've seen plenty of Ginter posts on the blogosphere, so I'll just show off my three favorites: 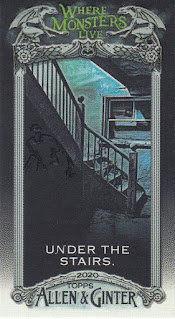 2020 Allen and Ginter Mini Where Monsters Live #MWML-10
This is one of the inserts I really like from this year's product and after seeing Gavin's glowing post last week, I figured out that this card was my favorite.  And somehow... someway... beat the odds and pulled it from my blaster. 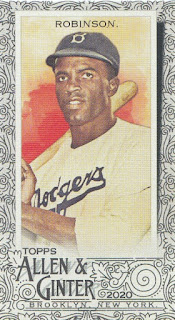 2020 Allen and Ginter Black Bordered Mini #42
The other really cool mini I pulled was this card for my Jackie Robinson collection.  I'm not sure how many guys on this year's checklist are players I PC, but it can't be more than ten, so I'll go ahead and say that I beat the odds.
Unfortunately, I didn't pull a Luis Robert rookie card out of my box.  But I did pull a printing plate of his teammate: 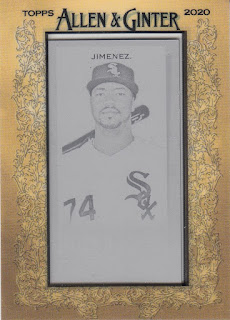 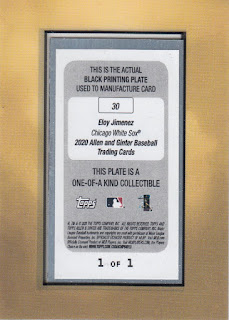 I'm not going to start an Eloy PC, but I did pick up a few rookie cards of his last year.  And this card will slide in right next to them.  Printing plates don't command the same kind of money that they once did, but this will be a nice reminder of my friend's generosity and the fact that every now and then... you can beat the odds.
Well that's it for now.  I hope all of you are well and safe.  Happy Monday and sayonara!
Overtime 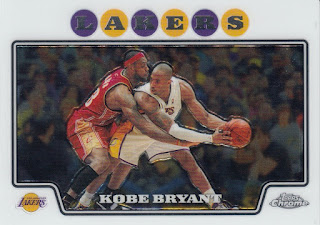 2008-09 Topps Chrome #24
My years of following the NBA are in the past, but if you've followed this blog long enough you probably know that I was once a fan of the Showtime Lakers up through the bulk of the 2000's.  Unfortunately due to the development of super teams, I just lost that loving feeling.  But the past month or so... I was hoping Lebron, AD, and the rest of the Lakers squad would find a way to win it for Kobe.  Not literally for Kobe... but just because I know that it'd bring a smile to him, Gigi, and the rest of the Bryant family.  Congratulations to the Los Angeles Lakers and all of their fans!
Posted by Fuji at 9:00 AM