Do You Remember Your First?

Six months ago, Night Owl wrote an excellent post on "firsts".  In the post, he wrote about the first baseball card he ever saw, the first card he pulled from a pack he purchased, the first baseball card he saw on the ground, and a bunch of other firsts ranging from cards to magazines to articles.
If you're reading this post, then you've no doubt already read his.  However if by chance you haven't, you can click here.
In the article he mentions that he often receives comments like "I wish I had a memory like yours."  I'm going to go out on a limb and say that I've left that comment on his blog at least once... if not multiple times.
His response was that maybe "people don't know how to hold onto their childhood", because "they're too busy trying to grow up".  He might be right.  I can't really say for sure why my memory sucks.  But that's one of the reasons I started this blog.  I'd love to document my memories here, so when the day comes that I no longer remember specific things from my childhood... I can turn to posts like this one.
Today... I wanted to document a few of my "firsts".  The original plan was to do this six months ago... but things have a way of piling up and getting lost in the shuffle.  Better late than never, right?
Okay, let's get things started...
First Baseball Card I Ever Saw:  ????? 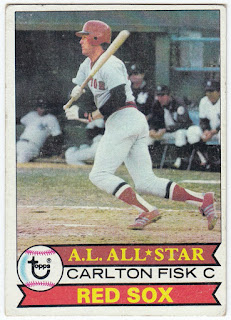 1979 Topps #680
I don't remember the first baseball card I ever saw.  If I had to guess, I'd say it was a 1979 Topps baseball card.
My neighbor gave me a box filled with them.  But I don't remember which card was sitting on top, but there was definitely a Carlton Fisk.
First Baseball Card Set I Saw In Its Entirety:  1981 Fleer 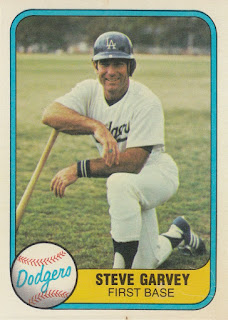 1981 Fleer #110
I've mentioned this a few times over the years, but it's worth mentioning again.  Back in 1981, my parents took me to Seattle to visit my cousin who was attending UW.  While there, we went into a store that sold sports stuff.  You know... things like jackets, hats, lamps, key chains, and baseball cards. 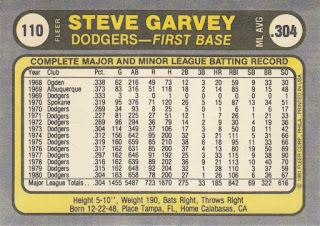 My parents let me pick a set and for some reason, I decided to go with the 1981 Fleer set.
First Boxed Set I Ever Owned:  1982 Topps K-Mart MVP Set 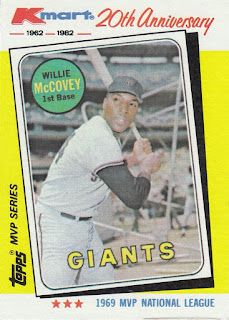 1982 Topps K-Mart MVP #16
When I was a kid, you were teased at my school if you shopped at K-Mart.  That's why I always tried to distance myself from that place as much as possible.  But somehow, someway... one of these sets landed in my collection. 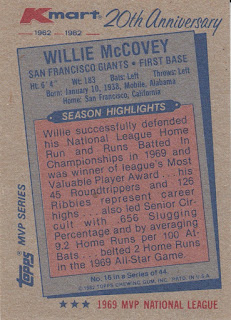 I was never a big fan of these cards, but the card backs were interesting to this ten year old baseball fan.
First Card Set I Ever Completed:  1986 or 1987 Topps 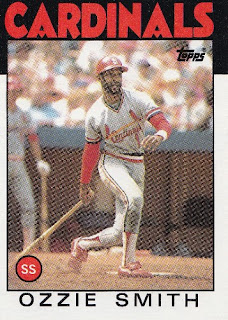 1986 Topps #730
I started actively building sets in 1982 or 1983, but the 1986 Topps set was the first one I came close to completing.  This set was also part of a card heist I was involved in.  Decades later, I can't remember if I actually ever completed this set. 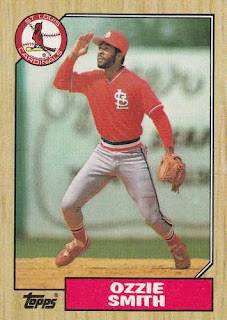 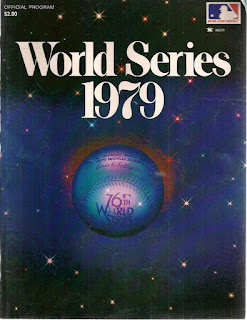 My first memory of watching the World Series was when the Pittsburgh Pirates beat the Baltimore Orioles.  I have no idea which games I watched, but I vaguely remember going to school and talking about it with friends.
First Baseball Book I Ever Read:  ????? 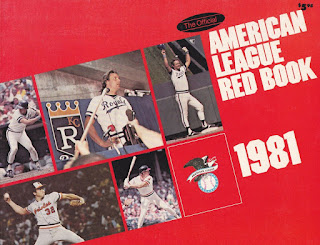 Sorry.  I just can't say for certain which one was the first I ever read, but the 1981 American League Red Book is a solid guess.  After searching Google images, I can say with 99.9% certainty that I owned this book.  I can say the same for the 1981 National League Green Book too.  Most likely they were purchased together, but back then I was way more into the AL than the NL.  Some of the late 70's and the 1980 books looked familiar too, but I'd only be guessing on those.
By the way, I realize that the Red and Green Books aren't your typical chapter books, but it says "book" on the cover, so I'm counting it.
Well that's it for today.  There's no way I'll ever be able to tell you the first baseball card I ever saw laying on the ground or the first sports article I ever read in a newspaper.  I guess there's a chance that one day I'll stumble across a Baseball Digest and it'll hit me that it was the first issue I ever owned, but I don't like my chances.
The bottom line is my memory is not nearly as sharp as Night Owl's... but I want to make one thing clear... I was never in a rush to grow up.   I'm truly grateful that I was able to experience an awesome childhood filled with positive memories.  Unfortunately... I'm just the guy who isn't good with dates or specifics.
A huge shout out to Greg for being the inspiration for this post.  This wasn't the first time I "borrowed" one of your ideas... and it probably won't be the last.
Happy Thursday and sayonara!
Posted by Fuji at 3:00 PM