When you hear the words, "blue moon"... what is the first thing that comes to mind?
Some of you might have thought of the Belgian-style white beer.
Others might have started humming the famous song written by Richard Rodgers and Lorenz Hart in 1934 and performed by numerous artists over the years including Mel Tormé, The Marcels, Frank Sinatra, Elvis Presley, and Rod Stewart.
If you're into astronomy, then you probably know that there will be a "Blue Moon" on Halloween... which means that it's the second full moon of the month.  I didn't realize this was such a rare occurrence... hence the saying "once in a Blue Moon".  The next "Blue Moon" won't show its face until August 31st, 2023.  And trick or treaters won't see another one until 2039.
But I'm sure many of you thought of this guy... 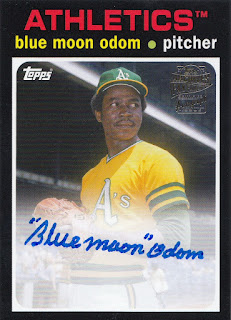 2020 Topps Archives Fan Favorite Autographs #FFA-BMO
Johnny Lee Odom was given the nickname "Blue Moon" by a classmate back in the 5th grade.  Although he's not a hall of famer... he went on to win three World Series rings with the Oakland Athletics and represented them in two MLB All-Star games. 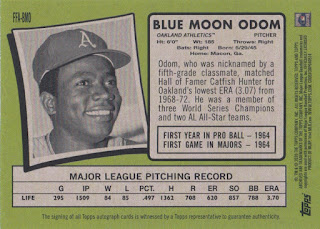 I'm glad Topps finally decided to add "Blue Moon" to their Fan Favorites checklist.  He doesn't have a lot of certified autographs available, so I was pretty excited when I added this card to my collection last month.
Well that's it for today.  Go enjoy a Blue Moon.  I know I am.  Happy Thursday and sayonara!
Posted by Fuji at 3:00 PM