When it comes to combination cards, card companies sometimes take a huge risk when deciding who to pair people up with. 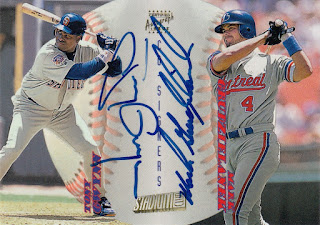 1998 Stadium Club Co-Signers #CS14
I've seen plenty of cards like my Gwynn/Grudzielanek Co-Signers card that have left me scratching my head.  Sometimes it involves a veteran and young budding star that doesn't live up to collector's expectations.  Other times card companies just throw two athletes together and hope for the best.  Bottom line... not all combination cards are classics.
But when paired correctly... they can become really cool cornerstone cards for your collection.  Today's post features five of my favorite combo cards and it was inspired by a post I read last week on Sports Cards Ate My Brain.  Sascards67 showed off some really nice combination autographs and relic cards.  The plan was to include him in my This Week in Blogging post, but it ran a tad bit long.  So I decided to make it a stand alone post.
I'm not going to bother trying to rank these cards, but I will say that this first card is one of my favorite cards in the collection: 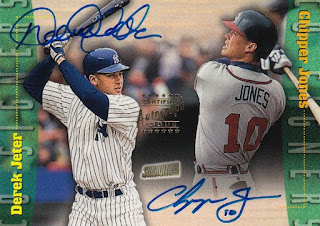 1999 Stadium Club Co-Signers #CS4
I realize this isn't the first time I've shown off this card and I'd be lying if I told you it was the last time.  The fact that Chipper and Jeter each touched this card at some point gives me goosebumps.  I've always wondered who signed this card first.
The same question can be applied to this card: 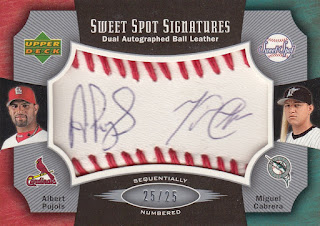 2005 Sweet Spot Signatures Dual #SSD-PC
Actually, I'm pretty sure that Upper Deck just had the players sign these leather swatches the same way they have athletes sign the dreaded stickers), but I'll take this card over a sticker-graph any day of the week.
Next up is this black bordered beauty: 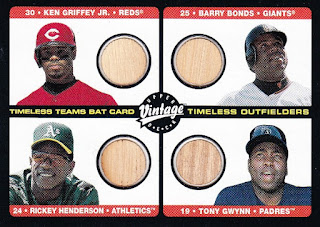 2002 UD Vintage Timeless Teams Bat Card #B-OF2
Okay.  I kinda wish Griffey was featured as a Seattle Mariner.  Upper Deck made the executive decision to have Rickey with the A's... even though he played with the Red Sox in 2002.  The could have done the same thing with Junior.
Nevertheless... I love this card.  It (supposedly) contains pieces of game used bat used by my two favorite baseball players, the Home Run King, and arguably the most popular player in our hobby during the 90's.

2004 UD Legends Timeless Teams
Team Terrific Game-Used Team Logo #TT-OA
I can only think of two booklets in my collection, but they're not even in the same league.  This awesome memorabilia card was a gift from Jim over at cards as i see them.  He actually has a few blogs and one of them is dedicated to his 2004 UD Legends Timeless Teams collection where I originally discovered these booklets.

This card has been one of the cornerstone pieces to my Oakland A's collection the past couple of years.  It features the players who were on the field when I first started attending games at the Oakland Coliseum back in the mid 70's.  And it was the first card that popped into my head when I was reading Sascards67's post.
I'll wrap things up with a memorabilia card featuring my two favorite football teams: 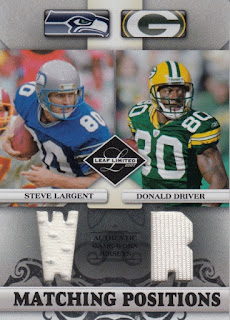 2007 Leaf Limited Matching Positions #MP-12
Steve Largent and Donald Driver each sit atop their franchise leaderboard in regards to receptions and receiving yards... and like Derek Jeter, Chipper Jones, and Tony Gwynn... both of these guys were loyal to one franchise.  That will always score bonus points in my book.
Well there you have it.  Five of my favorite combination autograph and memorabilia cards.  What about you?
What are your favorite combination "hits" in your collection?
If "hits" aren't your thing, then...
What are your favorite combinations cards in your collection?
Well that's it for today.  Happy Tuesday and sayonara!
19th Hole

2011 Panini Americana Movie Posters Materials Combo #7
This is a bonus card scan of a combination relic.  Never seen this movie, but I'm familiar with three of the stars in the film.  Unlike most memorabilia cards, the swatches of clothing (supposedly) worn by Jerry Lewis and Donna Reed appear on the back of this card.
Posted by Fuji at 3:00 PM