With the World Series scheduled to start tomorrow, my plan was to break down the series by featuring cards from each team.  Sadly... upon further inspection, I don't have as many Tampa Bay Rays as I originally thought.
Another thing that screwed me up was I didn't find out who the Rays would be facing until after 9pm last night.  Who schedules these games?
Anyways... congratulations to all of the Dodgers bloggers out there and the pair of Rays supporters I know of.  I'll give you my thoughts on the 2020 World Series tomorrow.
Today I'll be recapping on a pair of PWE's I opened up over the weekend.  First up is a card I mentioned in my post on Saturday... 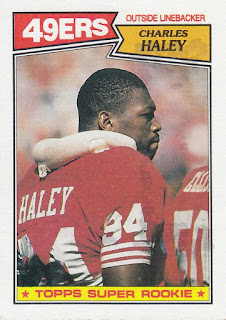 1987 Topps #125
Chris over at The Collector opened up some packs of 1987 Topps football last week and pulled this hall of fame rookie card.  I think normally Chris would have held onto this card, but fortunately it had this gum stain on it: 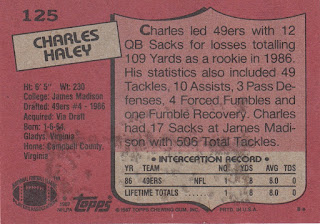 That's right... I said "fortunately".  I'm all about gum stains.  He sent the three other cards with gum stains too... along with some Packers and A's cards that were perfectly clean: 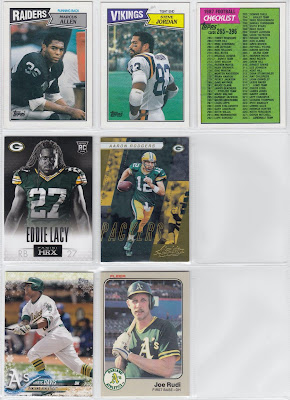 Thank you Chris for this nice addition to my wax/gum stained rookie card collection.  And the Marcus Allen is already sitting in my Damaged Card PC binder.
The other PWE I opened was sent by Daniel over at It's like having my own Card Shop.  He reached out to me on Twitter... which is a social media platform I still don't really understand or utilize and offered me some Denny's Star Wars cards.  Thankfully I have just enough Twitter skills to be able to hit reply.  A few days later, voilà... 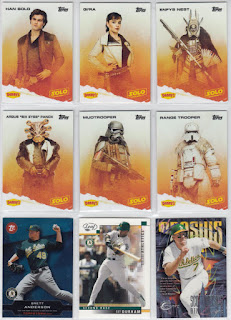 As you can see... he also threw in a few A's cards like Chris.  But the main card I wanted was this beauty... 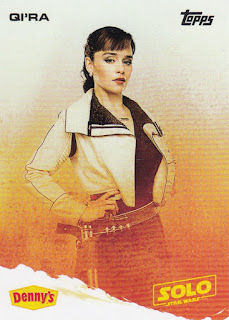 2018 Denny's Solo #NNO
The lovely Emilia Clarke plays Han Solo's girlfriend, but honestly... I'm more familiar with her role as Daenerys Targaryen on Game of Thrones.  My friend actually had to point out that Qi'ra was Clarke during the movie.  Regardless... this is a beautiful addition to my Star Wars collection.
Thank you Daniel for hooking me up with these restaurant cards.  I think it's pretty awesome that Denny's decided to have a trading card promotion again... after the huge success they had in the 90's with their baseball holograms.
Okay... I seriously need to wrap things up and get ready for my home room class that's starting up in less than thirty minutes.
Happy Monday and sayonara!
Posted by Fuji at 9:00 AM