I've been talking about not teaching summer school for a few years now.  But after being forced to take it off due to COVID-19, I've learned to have a deeper appreciation for those two paychecks I didn't earn this summer.

Luckily I decided back in January to cut back on buying cards, so this change in finances didn't hit me as hard as it could have.  But the days of nonchalantly picking up a new Rickey Henderson autograph or a PSA 10 graded rookie card of Fernando Tatis Jr. are in the past.

That doesn't mean I haven't bought anything this summer.  I completed a bunch of sets, including the 1977 Kellogg's baseball set that had been sitting on my desk for a couple of years now.  I've also purchased some cards on Topps.com, which I'll write about as soon as I receive them. 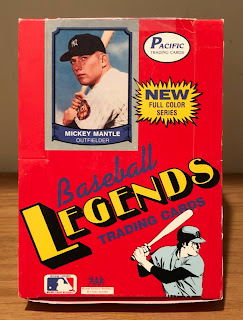 And two weeks ago, I bought a box of 1988 Pacific Baseball Legends off of Dennis who runs the blog... Too Many Verlanders.  He picked up a pair of boxes off of Facebook and offered one up to me.  If you're interested in seeing what he pulled from his box or reading about his cool FB find, click here.

Unfortunately, my box has been added to the unopened box collection... and won't be opened anytime soon.  I currently have forty to fifty thousand cards sitting in my garage that need to be cleared out before I end up opening up anymore boxes.  I would also like to find a 1989 Pacific Baseball Legends Series 2 box to go along with this box and the box of 1990 Pacific Alumni Team Baseball Legends I picked up years ago.  Thought it'd be cool to open up and build all three sets at one time.

In the meantime, I have plenty of cards to keep me entertained.  In addition to the box, Dennis sent me three bricks of cards which I broke down into the following stacks: 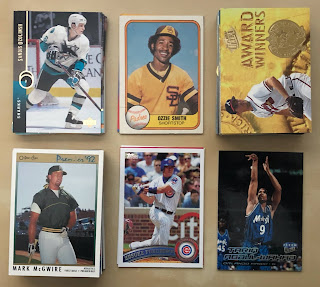 The two largest stacks containe Greg Maddux and Oakland A's cards, but there were also some Padres, Sharks, SJSU Spartans, and Japanese baseball players thrown into the mix.

Here are a few of the highlights:

At first I was a little baffled by the appearance of Kevin Millwood on this card, but after looking up his 1999 statistics I quickly discovered he had the best season among the four pitchers.  He led the Braves in ERA, WHIP, strikeouts, and winning percentage.

There's already a copy of this card sitting in my Tony Gwynn collection, however I needed another copy for the Diamond King project I recently started working on.

If I had pulled this card out of a pack thirty-two years ago, it would have went into the trash.  Today it's the newest addition to my Damaged Card PC.

Dennis also sent me three San Jose State Spartans.  Tariq Abdul-Wahad happened to play for both of our teams.  He was a Michigan Wolverine (played there right after Webber left for the NBA) for two years before transferring to SJSU where he led the team in scoring his final two seasons.

Doug Wilson was the San Jose Sharks first captain and has been their general manager since 2003.  This year he was inducted into the Hockey Hall of Fame primarily for his accomplishments on the ice with the Chicago Blackhawks, but Sharks fans have appreciated his work in the front office.

There was also a nice variety of Oakland A's cards, but this Rickey stood out.  It's such a great looking card.  I thought about treating everyone to a set review, but after some digging... I realized that I already wrote one ten years ago.  If you're interested in seeing the entire set and checking out one of my earlier posts, click here.

And I'll wrap things up with a pair of hits...

It's always nice to add a pair of patches to the collection.  Once upon a time I was attempting to spell out "SAN JOSE FUJI" with autographed letter patches.  I believe I fell one letter short, but I'll have to double check.  Regardless... now that I'm on a tight budget... it won't be very high on my priority list.

Thank you Dennis for offering to sell me one of your boxes and throwing in some very nice bonuses.  As long as I'm around the blogosphere, I'll be setting aside my extra Tigers for you and Julie.


Has COVID-19 made an impact on your hobby budget?


The hobby has really boomed since March with a lot of new money entering our hobby.  Even though some outrageous prices have started to settle, I still feel like it is a seller's market right now.  I know that I've seen plenty of completed listings on my eBay watchlists soar in price, which kind of stinks.  But I'm happy that card collecting popularity has been on the rise.

Well that's it for today.  Happy Monday and sayonara!
Posted by Fuji at 10:00 AM