When Topps released their team cards last year which featured wide angled shots of stadiums, it seemed to be universally liked by collectors.  And rightfully so... because they're beautiful.  I enjoy them so much, that I decided to track down as many copies of the Oakland Coliseum as I could get my hands on.  However I've shown off the 2019 Topps card #126 more than enough times.

While looking for cards for a Rickey Henderson post I wrote last month, I came across the card you see above.  It inspired me to track down as many Mother's Cookies cards featuring stadiums as I could find for a reasonable price.

Unfortunately COMC's prices didn't fit into my budget, but there are a couple of dealers on Sportlots who have some in the 18¢ to 28¢ price range.  Those are prices I could live with.

Here is what I've accumulated so far...

This is my favorite card of the lot.  This was the Oakland Coliseum from my childhood.  The one with the amazing view of the Oakland Hills beyond the outfield scoreboards.

I really love this card too with the city of San Francisco in the background.

This is probably the worst looking card of the lot... but I went to the game when they handed these cards out.  I also attended the San Francisco Giants Mother Cookies giveaway game that season as well.

I've written about these stadium giveaways in the past, but I'll review it for those who may have missed them.  Back in the 80's and 90's, Mother's Cookies created team sets for the Oakland A's, San Francisco Giants, Seattle Mariners, Los Angeles Dodgers, Texas Rangers, California Angels, and Houston Astros that were distributed to fans in a little paper envelope.

There was one catch.  They didn't give fans complete sets.  Each fan received twenty-something (maybe 21, 22, or 23) different cards, plus six or seven duplicates of one player.  The idea was to trade one of your extras to someone who didn't receive that card in their envelope for a card that you needed.  I've gotta say the idea is pretty ingenious.

Later in the decade, Mother's Cookies also started creating special sets of cards to honor specific players like Mark McGwire, Ken Griffey Jr., and Nolan Ryan that were inserted into specially marked bags.  But this post is running a little long, so I'll save those for another day.

Here is your question of the day...

I love just about any cookie, but if I had to pick one, I'd go with my sister-in-law's "gross" cookie.  Not sure of the exact ingredients (family secret?), but they're similar to a cowboy cookie.  Each year... my Christmas present usually involves a dozen or two of these and they don't last very long.

My favorite stadium will always be the Oakland Coliseum for sentimental reasons... but I also loved Candlestick Park.  And AT&T is definitely the nicest ballpark I've gone to. 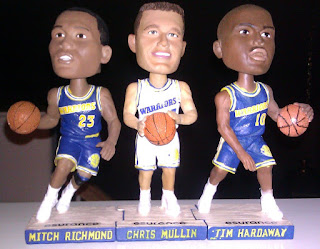 As for stadium giveaways, as much as I love my Mother's Cookies team sets... I think the Run TMC bobbleheads are my favorite.  I'm pretty sure the game I received the Mullin was the last Golden State Warriors game I attended.  The following season, the Warriors started winning and ticket prices started soaring.

Okay... this post has dragged on long enough.  Happy Tuesday and sayonara!
Posted by Fuji at 3:00 PM