All Hits No Fluff

Today has been a little crazy.  My brother stopped by and hooked me up with two huge bottles of hand sanitizer along with some startling news.  Then within fifteen minutes after he left, my best friend called and told me she lost her phone.  She was pretty freaked out... and rightfully so.  I've been in her shoes and it wasn't fun.  Thanks to the Find My Phone app, she was able to track it down.

After that... I settled down and began writing this post.  Ever since my summer break started, I've been dedicating Monday mornings to writing at least one or two blog posts.

The good news is that I have plenty of stuff to write about.  I've been using my eBay gift cards at least once or twice a week... and making at least one Sportlots order every other week.  There are also cards from my recent COMC order that I'd like to write about as well.  Plus a few of you gave me topics to write about last week.  And if that weren't enough...  I also have a stockpile of care packages that I need to write posts for.

The bad news is that I'm so backed up... that some of these packages are approaching the two to three week mark.  So before I go any further, I apologize to Rod (Padrographs), Alex (Chavez Ravining), and Bob (The Best Bubble) for the delay in publishing "thank you" posts.  I've already scanned and uploaded Rod and Bob's packages.  I just need to sit down and write.  Alex's contest package is sitting on my desk waiting to be opened.  Had planned on opening it up this weekend, but it didn't happen.  It does give me something to look forward to though.

Head is killing me.  Gonna lay down and take a quick nap.

Today's post covers a care package from Mr. Scott over at Bob Walk the Plank.  He retired from blogging a couple of years ago to spend more time with the family, travel, and live life.  Rumor has it that he's active on Twitter, but I'm one of those old guys who has an account, but doesn't really know how to use it (although I did have a nice chat with Dennis @ Too Many Verlanders while typing up this post).

That means the only communication between us usually takes place within the comment section of each other's blogs.  However last month, he emailed me to confirm my address and a week or so later, a fat padded envelope was sitting in my office.

Inside there were five cards.  All hits.  No fluff.  See for yourself... 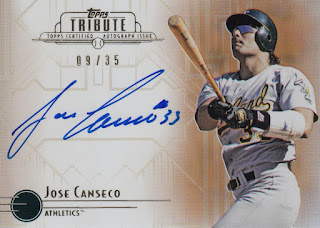 This is the sixth autographed Canseco card I've added to my collection.  This card pairs up nicely with the pink parallel that Collecting Cutch sent me last year. 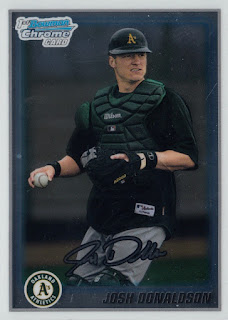 I miss Josh Donaldson and those early 2010 A's teams.  I'm always happy to add another rookie card of his to my collection.

A pair of "hits" from an era when I wasn't collecting.  Even though I wasn't buying cards, I still attended games and rooted for both of these guys. 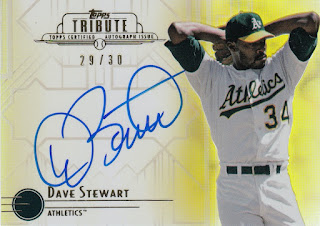 The final card is this shiny card of Stew... who was a stud.  He just celebrated the 30th anniversary of his no-hitter against the Blue Jays back on June 29th, 1990.

Thank you Matt for this very generous care package.

Well that's it for today.  I'm hoping to write at least one more post after publishing this one.  Then I'm going to lay down and take a nap, because my head is still killing me.