One of the reasons I've been content with cutting back on my hobby spending is the plethora of cards I've accumulated over the past twelve years that have been sitting in boxes.  Some have been featured on this blog before being tucked away, while others have sat in darkness unappreciated.

Today's post will showcase one of those hidden treasures that deserves to see the light of day and receive some recognition.

Back in 2010, Topps had a wrapper redemption offer for collectors who opened boxes of Chrome Baseball.  It was simple.  Send in twenty-four wrappers of 2010 Chrome hobby baseball and they'd send you a special three-card pack featuring refractor rookies and legends.  The set featured nine rookie card variations plus a Buster Posey rookie card that wasn't available as part of the original set.  To top things off, they included five of the greatest players in the history of the game.

Here's a look at the nine rookie card variations in the 2010 Topps Chrome Wrapper Redemption set: 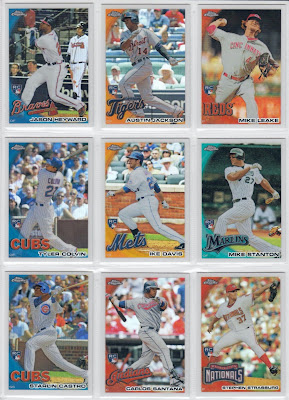 Each of these guys had a regular rookie card and various parallels in the 2010 Topps Chrome set.  The ones you see here use a different photo from those and since they were part of a redemption program are way easier to find compared to their pack pulled counterparts. 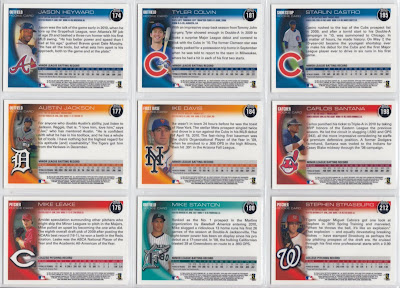 The final six cards in the set consist of the Posey and the legends: 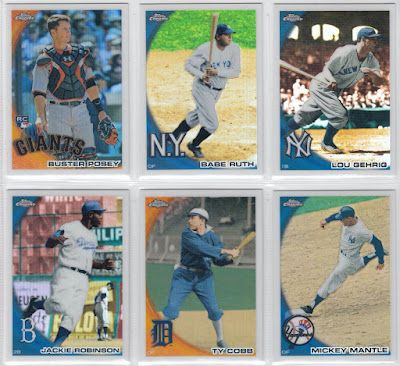 Out of these six players, Mickey Mantle was the only guy who was available in the regular issue Chrome set. 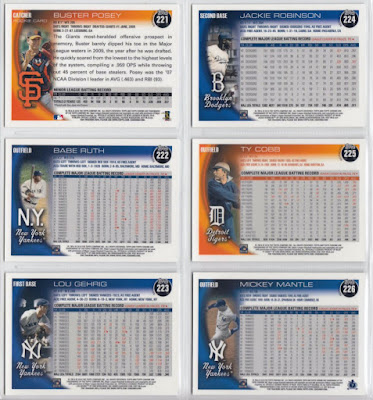 Topps must have printed a ton of these wrapper redemption refractors, because I've seen some of these legends sitting in dollar bins and it wouldn't surprise me if they are littering quarter bins too.

Posey announced a few weeks ago to opt out of the 2020 season, because it was the right decision for him, his wife, his children, and the twin girls they just adopted.

Out of the other nine rookie refractors, Mike Leake is the only other player who decided to take the 2020 season off.

Giancarlo Stanton has put a lot of smiles on Yankees fans' faces so far this season.  Jason Heyward, Starlin Castro, and Carlos Santana have stepped into the batter's box this season too.

Strasburg was scheduled to pitch last Saturday, but was scratched due to a nerve issue in his throwing hand.  Hopefully he'll have made his 2020 season debut by the time this post has been published.  There was a chance he'd pitch this afternoon against the Toronto Blue Jays.

The last three rookies each had respectable MLB careers with Austin Jackson still looking for an opportunity to play.  Maybe he'll get his shot with the Marlins.  Right now we're just waiting to see how things play out in Florida.

It'll be interesting to look back on this set in twenty years to see if any of these guys get the call from Cooperstown.

Thankfully there are at least five hall of famers in this set, including one of the greatest to ever play the game:


Do you think any of the current players in this set make it into the National Baseball Hall of Fame? 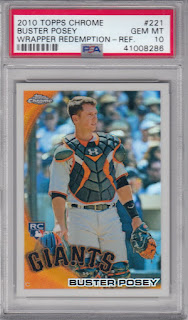 I'm pulling for Posey, but he hasn't been the same the past couple of years.  Hopefully spending some quality time with his family will help him bounce back and have a solid second half to an already very successful career.

Well that's it for today.  Here's the song that inspired today's title:


Happy Throwback Thursday and sayonara!
Posted by Fuji at 3:00 PM