Two weeks ago, I decided to start collecting autographs of athletes who are the only person to ever accomplish a feat within their sport.  A few days later, Jay over at Card Hemorrhage reminded his readers of Rennie Stennett's once in a generation feat of going 7 for 7 at the plate during a nine-inning game.  Although the achievement has happened before, Stennett is the only modern day MLB player to do it. 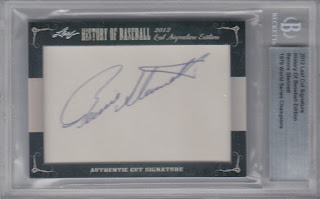 When I finished reading his post, I ran over to COMC and eBay to see if I could find a certified autograph.  I was surprised to find out that he only has two certified pack pulled signatures available.  One is a one-of-one In The Game cut signature from 2014... and the other is the cut signature you see above.

There weren't any copies of this card available on COMC, but I found one on eBay with a BIN price tag of $8.  Now normally, I wouldn't spend this much money on a plain looking cut signature of a living athlete, but according to Beckett, this card only has a print run of 22.  In other words, if I didn't purchase this right now, I might not have the opportunity again.

The only problem was that it wasn't only $8.  The seller was also charging $4.99 for shipping and when you factor in tax... the final price was going to be about $14.  I began having second thoughts on the purchase.  Then I scrolled down and noticed that each additional item shipped for only 25¢ each.

The hunt was on.

After sifting through his store for over thirty minutes, I had added ten more autographs to the shopping cart.  Actually there were more, but I trimmed things down because I didn't want to spend that much money.  At the time of checkout, the eleven cards totaled $62.35 (+ $13.50 shipping and tax, which my eBay Bucks almost covered).

The bulk of the purchase contained fan favorite autographs from early 2000's products like this: 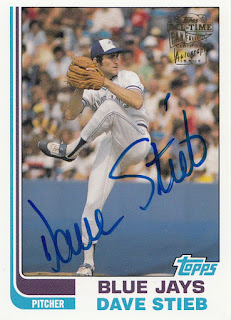 This card is a nice addition to my Hometown Heroes PC.  Stieb is one of a handful of professional athletes that attended the same high school as me.  I was tempted to show off the entire purchase here, but I have a feeling that some of the cards will eventually end up receiving their own post.

However... since I don't usually write basketball card posts, I'll go ahead and show you all the latest addition to the Los Angeles Lakers PC: 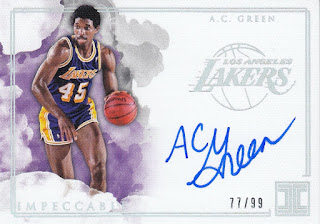 A.C. Green is probably best known for abstaining from sex until he got married, which is pretty cool accomplishment.  However I didn't buy this card for that reason.  I picked it up because he was an integral part of the Showtime Lakers during the second half of the 80's and continued to play with them into the early 90's.  He's also made his mark in the record books by playing the most consecutive regular season games in NBA history.

Well that's it for today.  I have a few more autographs that I'll be writing about and adding to my Unique Accomplishments PC in the upcoming weeks.  I'm also trying to hunt down a few others that were suggested by some of you.  Stay tuned.

In the meantime, here is today's question of the day:

Do you ever get sucked into buying additional cards from a seller because of their combined shipping policy?

Please tell me that I'm not the only "combined shipping" sucka out there.