It's never easy going back to work after having a week off, but I've got to admit... I feel like I was able to accomplish so much.  I've already written about my trip to Vegas and finally getting all of those care packages shipped out.

But I also finally got around to watching The Battered Bastards of Baseball.  It's a documentary about the Portland Mavericks, which was an independent minor league team back in the 70's.  I'm a little strapped for time, so I'll forgo the plot summary, but if you're a fan of baseball then I'd highly recommend it.

While watching the movie, I was pleasantly surprised that one of the player's name was familiar:  Jon Yoshiwara. 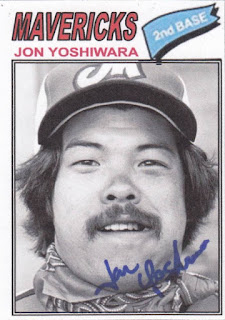 It took about a minute before it clicked.  Rod over at Padrographs had sent me his autograph last summer. 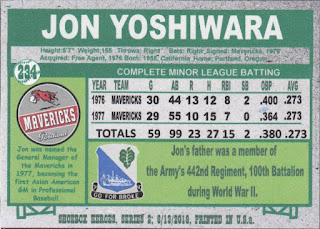 In 1977, the Mavericks' owner Bing Russell (Kurt Russell's father) made Yoshiwara the first Asian American general manager in professional baseball.  Back in September when I first received this card, I thought this custom card was pretty darn cool.

However after watching this movie, I realized that this card was way more cooler than I originally thought. 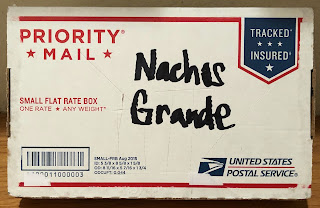 I was also pleasantly surprised to see this package in my mailbox a couple of weeks ago.  At the time... work was a little crazy, so I held off on opening it until I came back from my trip.

As you can see, it was from Chris over at Nachos Grande.  Here's a peek inside: 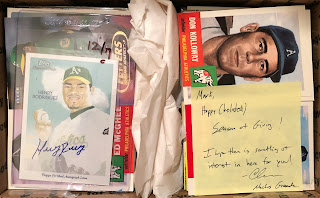 Right off the bat, I noticed an autograph of Henry Rodriguez: 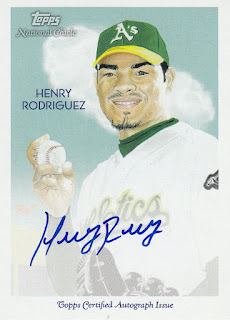 I totally recognize this autograph and thought that I already had a copy.  However, I was pleasantly surprised that I didn't.  It always feels good to add a new autograph to my Oakland A's collection.

There were also a bunch of A's base cards, inserts, and parallels:

Here's a 9-pocket page of my favorites: 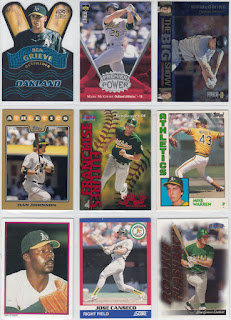 But one particular card stood out more than the others in Nacho Grande's care package: 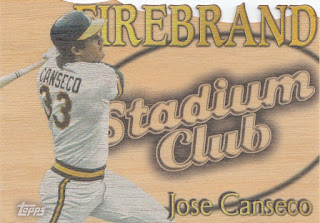 If you're unable to tell from the photo, this is a die-cut card printed on wood that I originally thought was from the 1997 Stadium Club Firebrand insert set.

However after I scanned the back and looked at the tiny date on the bottom, I noticed that it was produced in 2014: 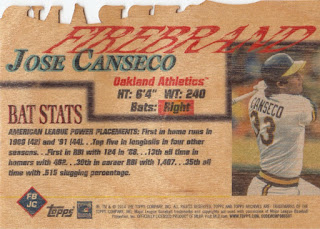 I'm not shy about bagging on the cheap and cheesy inserts that Topps has been producing the past decade or so.  But after seeing this card, I've got to admit that I was pleasantly surprised.

Thank you Chris for this very generous care package.  And I know I already thanked Rod, but I feel like he deserves to be thanked again for the awesome Yoshiwara autograph.