It wasn't easy, nor was it a lot of fun... but I finally put the finishing touches on thirty-three care packages and shipped them out yesterday morning. 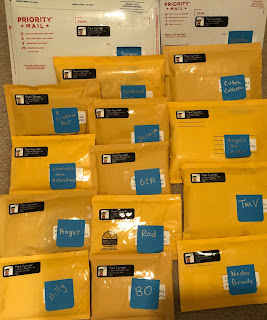 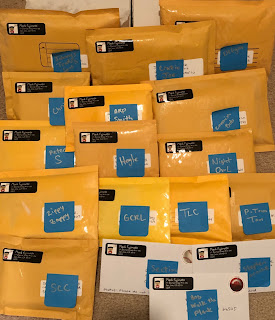 At one point, I had over thirty stacks of cards scattered across my office floor with these blue sticky notes attached to them.  I had this "by the numbers" blog post idea where I was going to calculate all of the cards in different categories, but that went out the window after sealing the first few envelopes without documenting what the contents were.

However, here are a few different numbers that are related to the care packages.  I've pair each number with a card I had sitting in a binder or a stack on my office desk.  None of these cards were part of the care packages shipped out.

That's the number of days since I last shipped out a bunch of care packages.  Let's hope it doesn't take me another 14 months to take myself down to the post office.

Thirty padded envelopes and one PWE headed north of the border set me back $162.56.  Ten years ago, I would have been shocked by these shipping rates, but that's about what I expected to pay yesterday.  Kudos to guys like Rod, Johnny, Dennis , and all the other bloggers who seem to ship out care packages on a regular basis.  Can't even begin to imagine how much you peeps spend each year at the post office.

This number represents the number of minutes I spent at the post office.  Only thirty seconds of that time was actually waiting in line.  The rest involved the gentleman scanning, printing, and inputing information.  If this was a restaurant, I would have hooked him up with a fat tip, because he was very patient and took the time to answer all of my shipping questions.

I couldn't believe it when I finally counted up all of the mailers and I saw thirty padded envelopes.  I think my previous record was seventeen back in 2015.

I only managed to put together three PWE's.  One was for a single card I had laying around for a retired blogger.  Another was a contest winner for a Mike Cramer minor league card.  And the last one was part of a trade that actually no longer needs to take place.

The bulk of the care packages were sent to contiguous United States mailing addresses.  However two of them were sent to Canada.  I quickly discovered that I will no longer be shipping padded envelopes there.  However the PWE was surprisingly affordable ($1.20).

There was one lone package shipped out across the Pacific Ocean and it shouldn't be too surprising that it was the most expensive.  I forgot to ask the guy working, but I'm guessing PWE's are the way to go from this point moving forward if I send any more cards to Japan.

So, who are this round's recipients of care packages?  Here's a list...

More than half of the packages were for people who sent me one or more care packages over the past 14 months.  A few were contest packages I owed.  And the rest were packages for bloggers who I had acquired cards for at one time or another.

If I somehow missed you and owe you care package, please comment down below and I'll try to fix the issue as soon as possible.  I know I still owe Brady and Mr. Haverkamp.  I'll be bringing them their cards the next time I see them at Serramonte.

By the way, is there a Rusty Greer super collector out there?  I also picked up a few Vida Blue and Mike Norris cards for someone, but can't remember who.  And who the heck collects the Portland Trail Blazers?  Please comment down below if you're the person who collects these players or team... or if you know who does.

As for moving forward, there are a few things I wanted to review in regards to care packages and this blog...

I know that I've made a few small trades for specific cards over the past two months... and I'm even talking to Greg over at The Collective Mind about swapping some 2002 Donruss Estrellas singles... but in general I don't really have the time or desire to trade specific singles.  Plus my tradelists on my website are way, way, way outdated.

Most of the cards that were shipped out this week came from COMC, card shows, or were part of large collections that I purchased over the years.  Plus there were a few singles I picked up specifically for people off of eBay.

Sadly... 2020 is the year that I'll be cutting back in hobby spending.  If I had to guess, I'd say my eBay purchases are down 80 to 90% since last year.  Plus I don't have any plans on adding any additional money to my COMC account.  And unless it's one of those "way too good of a deal to pass up" collections, I don't anticipate buying anymore of those anytime soon.

I also have zero plans to bust blasters anymore.  It's much more cost effective for me to purchase completed sets on eBay.

What does that mean?  It means that most of the cards I pick up for fellow bloggers will probably be purchased from dime boxes, quarter bins, and dollar deals I find at card shows and flea markets.  It also means that I don't anticipate having tons of goodies to ship out in the near future.

I think I'm going to give PWE's more of a shot.  Padded envelopes are nice for higher valued cards, but if I want to send one or two cheap relics or autographs, then I'm probably just going to use a plain white envelope.

If you are the recipient of an unsolicited care package, please do not feel the need to send anything back.  I'm at the stage of my life where if I find something for someone, I'll pick it up for them.  I'm not looking for anything in return.

The days of me shipping out common base cards are in the past.  There are plenty of ladies and gentleman out there who still ship them, so this probably won't affect anyone too much.  As for sending me yours, I won't stop you.  But at this point, you should know that I typically pull out the oddballs, inserts, and parallels which go into a binder... and throw most of the common A's (and other teams I collect) base cards into a giant box that haven't been sorted in quite some time.

One day, I plan to build a really cool Frankenset for my favorite teams, but that's probably 10 to 12 years from now.

The most shocking and impressive number related to this mass mailing is zero.  That's how many angry messages or reminders I received from people I owed.  I totally appreciate all of your patience.  There's really no excuse for making some of you wait over a year.

The goal is to send PWE's more regularly... while reserving the padded envelope shipments to early August and the February break.

Hope this update was informative and useful.  And once again, I apologize for the delay on shipping out these packages.  By the way, if any of you want tracking numbers, just email me and I'll hook you up.