Topps pledges to bring you closer to the game from the past, present, and future.  Just joking. 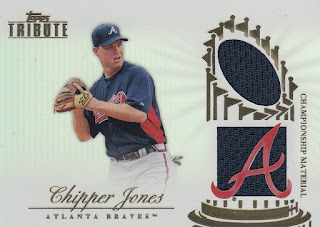 The relics contained on this card are not from any specific game, event or season, nor were they necessarily used during a World Series game. 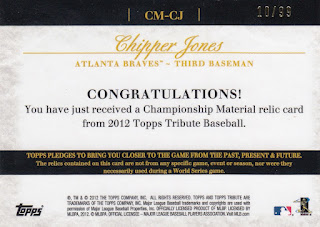 Back in September, I purchased a ninety-eight card collection off of my buddy Ben for $200.  This card was part of that purchase and when I first saw it, I was excited to find this hidden gem.

If you look closely, you can see that Topps printed the words Championship Material right next to the two blue swatches of uniform.  And the trophy printed in gold foil is clearly the Commissioner's Trophy awarded to the team who wins the World Series.  This information led me to believe that this was a piece of Chipper's jersey, pants, undershirt, stirrups, or something he wore from the 1995 World Series when him and his teammates took down the Cleveland Indians.

However upon turning the card over, I noticed in small print:

Considering the price I paid, it's still a cool card.  But when you consider that this was the guaranteed hit pulled from a pack that originally retailed for $50, this joke isn't that funny.