It seems like all of the cool kids are using TCDB these days to add new cards to their collections, but not me.  I'm a rebel.  A few weeks ago, I decided to clean up my office and wrap up some sets that were cluttering my desk.  My solution?  Sportlots. 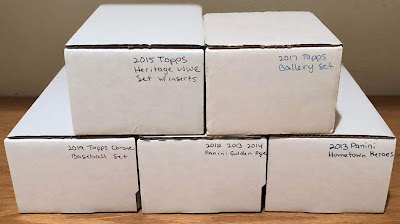 I don't purchase cards from that site very often, since I'm way too cheap to dish out 18¢ for commons.  However... dropping $21.73 (+ $13.45 shipping) allowed me to complete ten sets while crossing off cards on a few others. 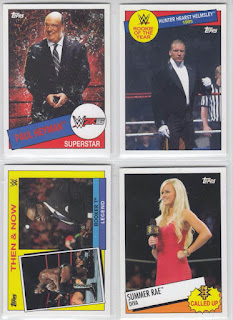 It feels good to clear off some desk space, but I'm not finished yet.  As soon as I wrap up and ship out all of the care packages that are cluttering my office, I'm going to head over to Sportlots again and try to knock off a few more sets.

While were on the topic of set building... I ran into Mr. Haverkamp at the Serramonte Mall Sports Cards, Toys, and Collectibles Show.  He handed me a nice stack of 1984 Topps baseball: 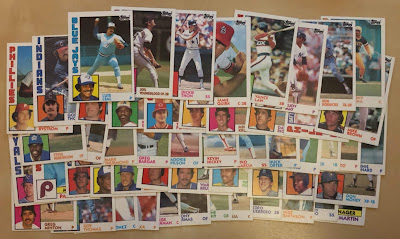 I was able to cross off fifty-three cards from my wantlist, which leaves 187 cards needed to complete the set.  This put me in a pickle.  Before Mr. Haverkamp's generosity, I was planning on breaking this set up.  But for now, I'll continue to work on it.  Hopefully I'll stumble across a big box of 1984 Topps baseball cards at the flea market on the cheap.

Mr. Haverkamp also got me one step closer to completing the 2013 Topps Update 1971 Mini set with this Derek Jeter: 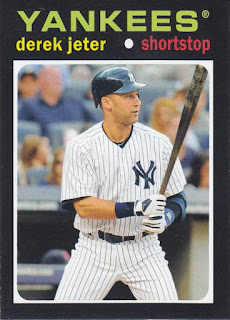 Last, but not least he asked me if I could use these two 2001 UD Decade memorabilia cards: 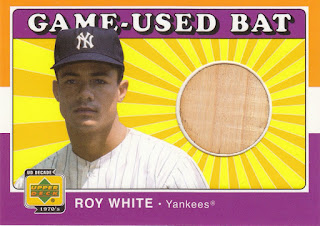 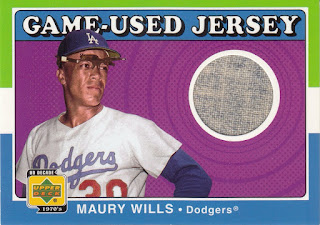 I haven't officially started building either of these sets, but I've thought about it.  In fact, I enjoy picking up singles here and there and estimate that I'm at least 50% of the way on each of these sets.

Thank you Jim for helping me out with all of these set builds!  I'll try to track down some more Mike Schmidt oddballs for your collection.