I've been waiting for this day to arrive since the middle of August.  Thanksgiving Break is officially here... and that means I have nine days to recharge my batteries and relax.
It's also Saturday which means another This Week in Blogging post...
#1:  Symbol of Courage

On Tuesday, Jim over at cards as i see them, showed of his latest addition to his mind-blowing hall of fame collection... which happened to be a beautiful Roy Campanella Topps Tribute game-used bat card.

1959 Topps #550
In the post, he mentioned that he would have celebrated his 99th birthday this past Thursday.  I figured I'd celebrate his special day by showing off this beautiful card that Commishbob gave me a few years ago.  This was one of those cards I had wanted ever since the first time I saw it.
Happy belated birthday Campy!
#2:  Kudos to Topps
I've been very critical of Topps the past few years, but it's only because I remember when they were the symbol of excellence and were my favorite baseball card company.  These days they're the only baseball card company with MLB logos which stinks, because they can produce whatever they want and there are collectors out there who will end up buying it.
However today, I wanted to actually commend them for their Home Run Challenge inserts which allow collectors to collect cards and interact with the game by predicting when players will hit a home run.  You can read about what happens if their prediction is correct by clicking here.  The Lost Collector predicted Ronald Acuna would hit a home run on August 9th and won a nice card for his collection.

1997 Collector's Choice You Crash the Game #CG28
The Home Run Challenge inserts reminded me of the You Crash the Game inserts of the 90's.  The premise was simple.  If the player featured on the card hit a home run on any of the dates listed, they could send the card into Upper Deck for a prize which was a special version of the card.
If I had pulled this card back in 1997, I would have had mixed feelings.  I would have been excited since Griffey ended up hitting not one, but three home runs during that four game stretch.  Unfortunately it was against my beloved A's. 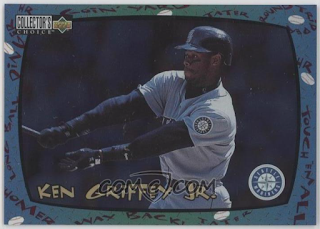 COMC Image
This is the card that collectors received for redeeming their card.
#3:  1954 Bowman

1954 Bowman #21
If you're a fan of the 1954 Bowman baseball set, I encourage you to head over to It's like having my very own Card Shop.  Earlier in the week, Daniel wrote a few posts dedicated to his LCS purchases involving this set.
Over the past few years, I've really grown to appreciate the 50's Bowman baseball sets.  The Vic Wertz pictured above is the lone 1954 sitting in my vintage binder... although thanks to Daniel... I am watching a couple on eBay.
#4:  A Super Rare Pull
Two days ago, Doug over at Sportscards From The Dollar Store showed of an insert he recently pulled from a pack of 2020-21 Upper Deck Series 1 hockey.  This wasn't one of those ordinary run-of-the-mill inserts that are currently flooding the hobby.  It was one of those super rare... 1:4000 packs... kind of pulls.
Congratulations Doug!  And kudos to Upper Deck for creating an insert you'd actually jump for joy if you were lucky enough to pull it.

1993-94 Donruss Elite Series #10
I couldn't think of any hockey inserts sitting in my collection with those kind of pack odds, but had I pulled this Gretzky out of a pack of 1993-94 Donruss back in the day... I would have definitely been jumping for joy.
In case you're wondering... I didn't.  I picked up this card back in 2015 at the Capitol Flea Market for $2.
#5:  We're Only Human
Yesterday, Matt over at Run-Fore!-Kelloggs Baseball Cards shared a pair of mistakes he made on eBay recently.  His were nowhere near as costly as the one I made back in 2014 when I purchased this card:

2013 Five Star Rainbow Foil #41
Click here if you want to read the full story.  Otherwise... let's just say that you shouldn't use drugs and buy cards at the same time.
#6:  One Thing Leads to Another
One of my favorite things about reading card blogs is learning new sports trivia.  Yesterday over on John's Big League Baseball Blog I discovered that Bill Freehan had a .545 batting average back in 1961 while playing for the Michigan Wolverines.  I've never really paid any attention to college baseball statistics or records, but his post inspired me to do some research.

2015 Archives Fan Favorites Autographs #FFA-PI
Did you know that Pete Incaviglia holds the record for the most home runs in NCAA history?  He hit 100 while attending Oklahoma State from 1983 to 1985.  According to this Bleacher Report article... it's highly unlikely anyone will break this record.
#7:  Giving Thanks

Wrapping things up this week is an inspiring idea from Trevor over at Bump and Run Football Card Blog.  He challenged fellow bloggers to write a small "afterword" at the end of your blog posts for the next seven days in which you'd share something you are thankful for.  I love his idea and hope others will join in as well. 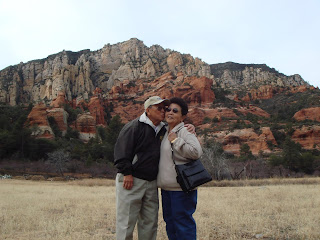 Obviously there are plenty of things in my life that I am thankful for, but my parents will always be at the top of my list.  Each of them played huge roles in my life and I wouldn't be the person I am today without their support and guidance.  They will always be my heroes and personal role models.  Thank you Mom and Dad.
Well that wraps up another This Week in Blogging post.  Here are today's questions of the day:
What is something you love about Topps baseball cards?
Do you have any memorable mistakes you've made involving eBay purchases?
Do you follow college baseball?  Any specific teams?
As always... I look forward to reading your responses... and any other comments related to this blog post.
Happy Saturday and sayonara!
Posted by Fuji at 3:00 PM