I'm a pretty forgiving person.  I wasn't always that way... but that's who I am today.  Outside of giving Topps a hard time every now and then... I also tend to focus on the positive things in life.  That's why I don't really think twice about picking up cards of guys like Barry Bonds or Pete Rose.
But recently I found a good deal on this 1970 Kellogg's card of Orenthal James Simpson that had me going back and forth on whether or not to click the "buy it now" button. 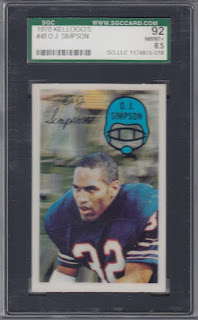 1970 Kellogg's #48
Obviously, I did.  But I still harbor mixed emotions on this purchase.  On one hand... watching the ESPN documentary on him made me cringe. 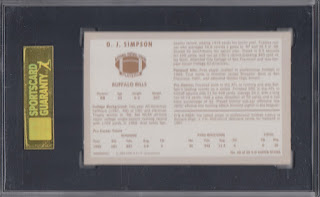 On the other hand... I've been trying to pick up the Kellogg's rookie cards of hall of famers... and this card fits the description.  Love the card... not the person.  Anyways... that's enough attention for OJ for today.  Let's stay in the same lane, but shift gears and focus on a care package from Elliptical Man, who loves to give away cards on his blog: The View from the Third Floor.
He sent me a PWE filled with football cards that appears to be a prize from his Halloween Quadrapalooza giveaway.  Let's start with the latest addition to my Brett Favre collection...

2010 Topps Peak Performance #PP35
Love the player... not the team.  And even though it sucked watching the Vikings beat the Packers on MNF, I'm glad Topps honored Favre with this card.  It's just a shame that they didn't use a photograph from that actual game.
Next up is another QB I enjoyed rooting for during the 2000's...

2010 Topps Peak Performance #PP6
This card references the Colts victory over the Jaguars to secure their 23rd consecutive regular season win streak... which is an NFL record.  Unfortunately Manning was on the road for that win, but is wearing a home jersey in that photo.
Love the record... not the photo.
Okay... I'm on a roll.  It's kind of fun analyzing photographs. 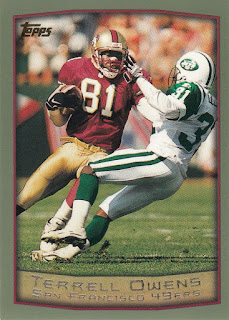 1999 Topps #20
Topps captured a great action shot of TO juking Jets Pro Bowl cornerback Aaron Glenn in an overtime win at Candlestick Park during the first week of the 1998 season.
Love the action shot... not the player.
And rounding out the rest of the PWE are a few more Peak Performance inserts and some shiny game cards: 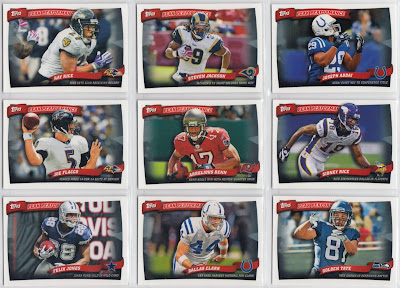 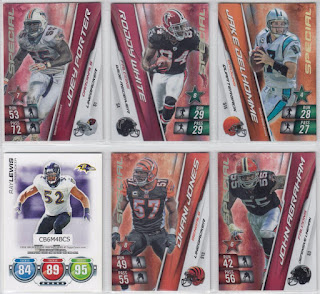 Thank you for the care package, Mr. Elliptical!  Love the generosity!  No mixed emotions here.  By the way... I sent you an email on Friday or Saturday.  Hope you received it.
Well that's it for today.  My back is feeling a little better.  It's back into the Zoom classroom.  Nineteen days until Winter Holiday Break.  Happy Monday and sayonara!
Posted by Fuji at 9:00 AM