There's truth behind the saying "when it rains, it pours" as care packages flooded my mailbox last week.  Unfortunately I was so busy with parent/teacher conferences, I didn't have the opportunity to open any of them up until this weekend.
Normally, I'd sit down and open all of the packages up in one sitting.  However this time I'm going to do things a little differently.  I'm going to open them up one at a time and slowroll them for maximum entertainment value.
First up was a small brown box from Collecting Cutch who just wrapped up his very popular Save Second Base Event which takes place annually during the month of October.  He handed out some pretty generous prizes and I was fortunate enough to win one of them.
I'm very excited to show off this lovely lady... but I'll save her for tomorrow's post.  Why?  Well... because there was one card that Brian sent me that truly deserves its very own post.  So without further ado... here's my official ticket into the Superfractor Club: 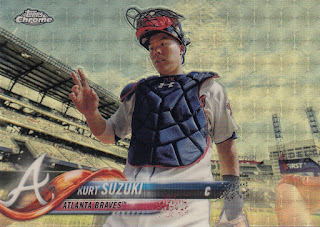 2018 Chrome Sapphire Edition Superfractor #608
Just in case you're not familiar with "superfractors", they're the one of one refractor parallels that collectors who tear into packs of any Chrome or Bowman Chrome products dream of pulling.  Now I've pulled several one of one's over the years... but I've never pulled or even owned one of these.  Although... I did buy wannabe Barry Bonds signed superfractor earlier in the year. 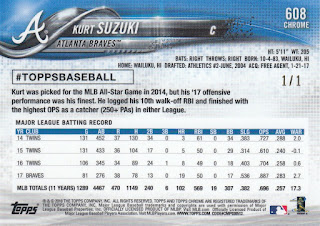 Thanks to Brian... I no longer need to pretend about being a member of the Superfractor Club.  I'm an official card carrying member.  He even took the time to write me a handwritten note that I've actually saved and attached to the penny sleeve protecting the card: 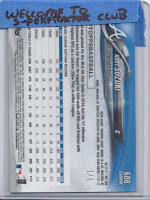 Thank you Brian for this beautiful card.  This was truly an exciting moment on my card collecting timeline... which is why I wanted to cherish it before I reveal the other cool cards you sent... that I'll share tomorrow.
Until then... feast your eyes on the latest addition to my Kurt Suzuki PC:

What about you...
Are you (or were you) a member of the Superfractor Club?
If so...
Did you pull the superfractor yourself?  Did you buy it?  Or was it a gift?
Happy Monday and sayonara!
Afterword:  Giving Thanks
I was originally going to save this "thank you" for Thanksgiving.  However Trevor's challenge, along with a stack of care packages staring at me has motivated me to thank this amazing blogging community a few days early.
We've said it in numerous blog posts that this community of bloggers and readers who support our blogs is very special.  Not only when it comes to collecting cards... but also when times are tough.  And I just wanted to say "thank you" to everyone who has taken the time to read my posts, shoot me an email, reach out to me on Twitter or Facebook, comment on my blog, trade cards with me, or taken the time to package and send a card or cards my way.
We may not be family in the traditional sense of the word... but what we truly have something special within our blogosphere and I truly appreciate that.
Posted by Fuji at 9:00 AM