Baseball has always been fascinating to me, because of the numbers and lists.  And when you look at Stan Musial's career... his numbers are simply breathtaking and he's near the top of a lot of baseball lists.
He started his MLB career with the St. Louis Cardinals in 1941 and wrapped it up twenty-three years later in 1963... which was almost a decade before I came into this world.  But that's the thing... when you accumulate the kind of numbers Musial had... you become a legend.
I have a deep appreciation for guys who spend their entire careers with one professional franchise as well as guys who have the ability to hit for average.  Musial fits both of these categories... which is why I've accumulated a small collection of Stan Musial cards over the years.
In honor of his 100th birthday... which is this Saturday... I was hoping to show off my latest addition to the Musial collection.  Unfortunately... COMC failed to ship on schedule... so I'll have to write about that vintage pickup another day.
In the meantime, here's the rest of Musial PC: 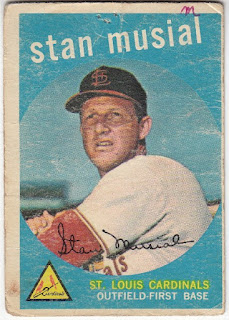 1956 Topps #134
Although this isn't officially a Musial card, it represents the oldest card in my collection with Musial on it.

2005 Absolute Memorabilia Tools of the Trade Autograph #TT-183 (#'d 001/100)
I've shared my opinion on sticker signatures quite clear over the years... but this purchase was made before I stopped purchasing them.  Plus it's one of the nicest cards in my Prime Number PC. 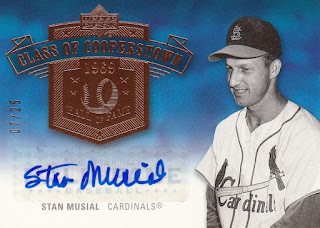 2005 UD Hall of Fame Class of Cooperstown Autographs #CC-SM2
Yeah.  Yeah.  Yeah.  Another sticker-graph.  Fine... here are a trio of on-card autographs for you: 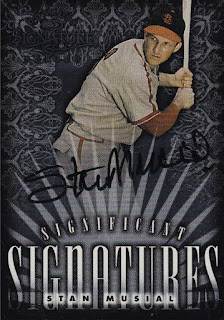 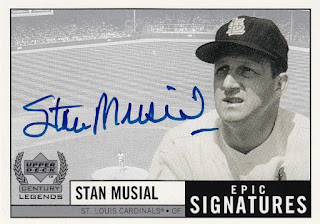 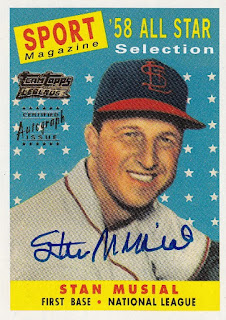 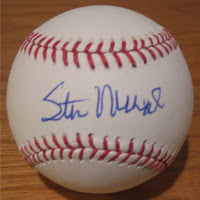 The next few cards aren't signed, but they're each very special... 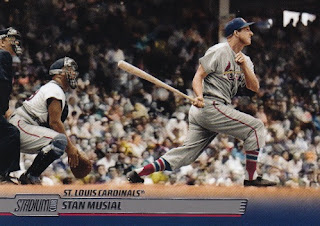 2014 Stadium Club #13
Stadium Club is known for its fantastic photography and this card fits the bill.  His 2020 Stadium Club card features a similar photo which is just as cool.

1992 Score The Franchise #2
I've been meaning to write about this card for years.  I have no idea how I acquired it, but it's a really cool piece of cardboard.  A simple design, fantastic photograph, and limited to only 150,000 copies.  Yup.  150,000.  Extremely limited.
And wrapping things up is one of my favorite non-Kellogg's oddball issues of the 80's:

1989 LJN Baseball Talk #27
Happy birthday Mr. Musial!  You're a legend and will never be forgotten.  Happy Thursday and sayonara!
Posted by Fuji at 3:00 PM