Is it just me... or has the Topps Project 2020 hype started to die down?  I never dove head first into the scene, but there was a point when I was checking their website on semi-regular basis.  However ever since I purchased Sophia Chang and Ermsy's versions of the 1980 Topps Rickey Henderson and 1983 Topps Tony Gwynn rookie cards... I don't think I've checked more than a handful of times.
That being said... I just purchased six of them on eBay, because they were less than $4.25 each (shipping/tax included).
Why the sudden interest?  Well... I was inspired by Brian over at Collecting Cutch after he sent me three new Project 2020 cards for my collection: 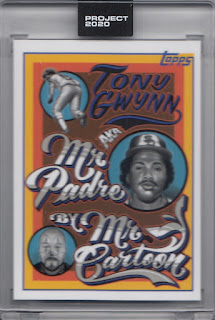 Topps Project 2020 #198 by Mr. Cartoon (Print Run: 3,567)
According to the his website, Mr. Cartoon is an artist who was born and raised in Los Angeles.  His work can be found on famous celebrities such as Eminem, Dr. Dre, and Beyoncé.  I'm not an expert on tattoos, but I feel like his version of Gwynn's rookie card definitely gives off a tattoo vibe.  I really like how he incorporates the portrait and action shot photos from the original card into this one with Gwynn's nickname. 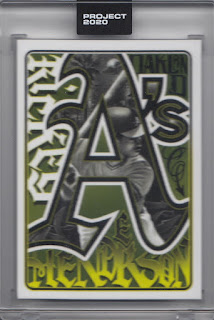 Topps Project 2020 #153 by Mr. Cartoon (Print Run:5,155)
Brian also hooked me up with Mr. Cartoon's version of Rickey Henderson's rookie card.  Although I tend to prefer the Project 2020 cards that semi-resemble the original card... I have to admit I like how the A's logo stands out and also enjoy the font he used for his name.
Mr. Cartoon actually produced two other cards for Oakland A's fans and card collectors that were available at his online store.  Unfortunately both are sold out. 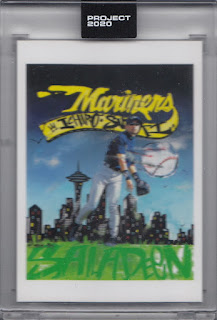 Topps Project 2020 #77 by King Saladeen (Print Run: 11,425)
The last Project 2020 card I received is my very first Ichiro from this line of cards.  I'm not very familiar with Saladeen's work, but he's an artist from Philadelphia who was a gifted high school basketball player.  He refocused his energy on art after an automobile accident sidelined those dreams.
My favorite thing about his interpretation of Ichiro's 2001 Topps rookie card is the Seattle skyline in the background.  The way he drew Mariners also gives off a 1989 Topps vibe... which is the first Topps set that The Kid appeared in.

Although Sophia Chang and Ermsy are hands down my favorite Project 2020 artists, I enjoy looking at and appreciating the work of other artists like Mr. Cartoon and King Saladeen.
That's why I went hunting for cheap copies of other cards from this series which I'll share with you guys as soon as they arrive.  In the meantime, let's continue checking out the rest of Brian's care package.

2001 Inkworks Smallville Autograph #A4
Before seeing her on Collecting Cutch, I wasn't aware of Kelly Brook.  If you're not familiar with her, click here and you'll be in for a special treat.
This autograph was one of the prizes offered in Brian's annual Save Second Base event.  Most of you know how much I enjoy an on-card autograph, so this one is a nice addition to my non-sport collection.
Wrapping up the care package were some singles for my Tony Gwynn, Greg Maddux, and Kurt Suzuki collections.  I'll start off with three new Gwynns for my binder:

2000 Pacific (Portrait Version) #363
It's always nice to add a new card to my Gwynn collection.  Three new additions is three times as nice.  At first glance, I thought I already had all three of these cards.  I guess I'm at the point where I don't really know what I have in my Gwynn collection compared to what I've seen on other blogs or websites.
However these additions have made me realize that I need the other 1994 Pacific Prism card of Gwynn as well as the "in action" version of his 2000 Pacific card.
He also hooked me up with two new Kurt Suzuki cards for my collection.  One of them I showed off yesterday.  If you didn't see it, please click here... because it was truly worthy of its own post.  The other card was this Allen & Ginter buyback card:

2010 Allen & Ginter #281
Once upon a time, I treasured Allen & Ginter and looked forward to its annual release.  During that era, Suzuki had a nice four year run where he was included on Ginter checklists.  This card is one of them.
If I ever go back and add money to my COMC account, I'll probably grab the other Kurt Suzuki A&G buybacks up for sale.  But it's not really worth dealing with the shipping drama over a pair of cards.
Here are the final four cards that Brian sent: 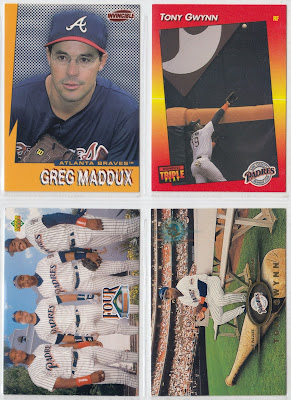 Talk about a complete care package.  Even though I already own these four cards... each of them are fantastic in their own special way.  There's a chance you'll be seeing one of these in a future post.
Thank you Brian for this very generous care package!  I'm not exactly sure what you send to the Andrew McCutchen collector who has just about every single Cutch card out there... but I'll find something.  Even if it means hooking up your girlfriend with more Cactus Coolers.
Okay... let's get back to those trendy Topps trading cards for today's question of the day...
Have you noticed that interest in Topps Project 2020 has softened the past few months?
Have you purchased any Project 2020 lately?
I'm interested in seeing of my point of view is skewed or not.
Happy Tuesday and sayonara!
Afterword:  Giving Thanks
Trevor over at Bump and Run Football Card Blog has challenged fellow card bloggers to write down some things they are thankful for.
On Saturday, shared why I was thankful for my parents.  Yesterday, I explained why I was thankful for the blogging community.  I'll be going a different route today as I express how thankful I am for my job.
When I was a kid, my parents would remind me over and over again that one day I'd have to grow up, move out of the house, and survive on my own.  They explained that an education opened up opportunities and they were right.
While I was in college, I made a life-altering decision to become a teacher.  Originally my parents thought I'd follow in my father's footsteps and become an engineer, since I really enjoyed science and math.  However that all changed after taking a few early childhood education courses at the community college level.
I'm not going to say that my job is perfect.  Most of you have read about some of the ups and downs on this blog.  But the "ups" heavily outweigh the "downs" and even though I haven't had a lot of positive things to share about my job these past eight months, I wanted to point out just how fortunate I am.
I'll never be a millionaire... but my job pays the bills, offers reasonable health insurance, has introduced me to some of my closest friends, and gives me the opportunity to make a positive impact on my students.  For these things... I truly am thankful.
Posted by Fuji at 3:00 PM