A few weeks ago, one of those large flat rate boxes was delivered and when I saw the name on the shipping label, I knew that I was in store for a treat.  The thing is... I carried the heavy box up to my office and waited for the right moment to open it.

You see... when Woody from Sports Card Forum sends me packages... it's not just a bunch of Oakland A's cards.  He includes stuff from a variety of my PC's... and more.  I knew that once I opened up this box, I would need at least a few hours to sort and scan the contents.

Well... thanks to the current situation our world is in... I had plenty of time.  Unfortunately... my heart wasn't in it.  I noticed the box every time I entered my office, but didn't open it until the moment was right. 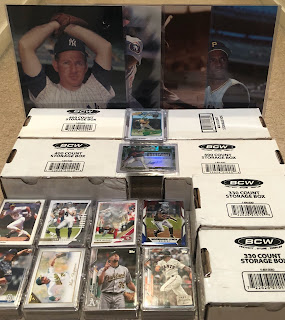 And that moment was this past weekend.  I kicked things off by opening the box and laying things out Friday evening.  I spent about an hour opening and organizing the 25ct., 330ct., and 400ct. boxes.

Then yesterday, I sat down and did one more final sort... 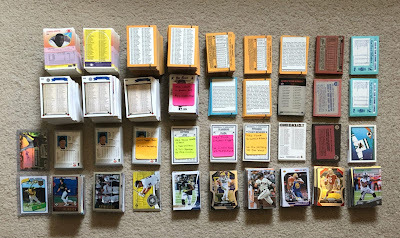 What you're looking at is over 2,000 cards spanning four sports... which included 11 complete sets and 5 incomplete sets.  There's obviously a lot to cover, so I'll go ahead and start off with one of the incomplete sets that I am super excited to try and finish...

The image above is kind of blurry... but essentially you're looking at three partial 1982 TCMA Baseball Greatest sets.  If you're not familiar with these, here's a quick peek at the card fronts and backs:

Each set is made up of 45 cards, which means they're perfect for being stored in 9-pocket pages.  I've already inserted all three partial sets into pages and designed a cover for the binder: 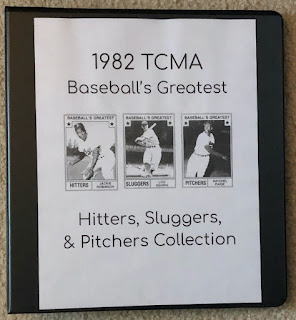 As most of you know, I'm more of a "Buy It Now" kind of guy when it comes to set building, but I'm a totally excited about tracking down the final seven cards I need for this project.  If any of you have singles laying around, here are the ones I can use: 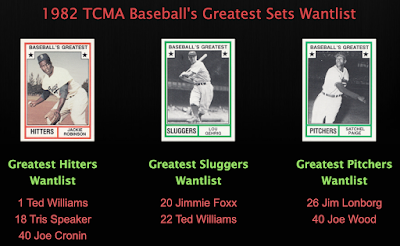 All of these cards have one thing in common.  They feature Red Sox players.  As you might have guessed, Woody is one of the collectors who receives my Red Sox trade bait.

I was also excited to see a huge stack of 1990 CMC Collect-A-Books.  These books were originally distributed in three boxes with each box containing 12 books.  Woody sent me 35 of the 36 books.  The only one missing was Wade Boggs, which I happened to have sitting in one of my insert binders.

Much like the 1982 TCMA Baseball's Greatest set... I plan on putting this set into a binder as soon as I receive the 1991 Collect-A-Books set I purchase this morning off of eBay.

Next up is a peek at the completed sets Woody sent me...

I'll keep things plain and simple.  Box bottoms rule.  I'll definitely be showcasing one of these sets in the next few weeks.  Let me know if you have a preference down in the comment section below.

Hey Zippy... you're my prospects guy.  Recognize any of these players on the Knights' checklist?

In addition to the plethora of sets, he included cards for my PC's.  I could have dedicated an entire post to these cards, but I've taken way too long to write this thank you post, so here are some of my favorites: 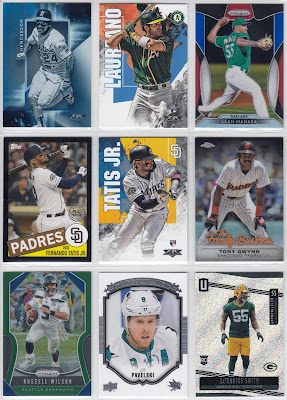 He also sent me a new addition to my Prime Number PC:

Oh and I almost forgot, he also threw in these three Line Drive 8x10 photos: 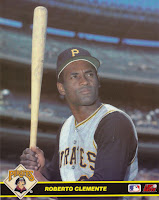 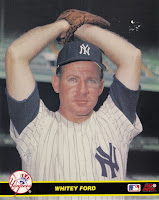 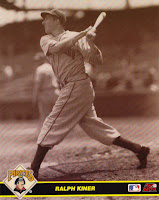 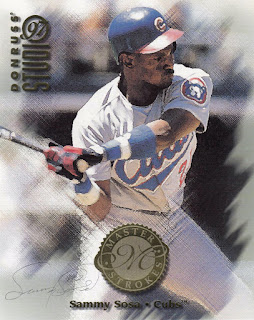 And last, but certainly not least... he sent me one of those cool rookie logo medallion cards of my boy Rickey out of 2020 Topps:

Thank you so much Woody!  This provided me with hours worth of entertainment.  I pretty much sent all of the Boston stuff I had laying around, but as soon as we're able to get out and about... I'll hit up some shows and start building another stack for you.

Happy Monday and sayonara!
Posted by Fuji at 10:00 AM