Does anyone know the first time a card company printed cards on the bottom of their wax boxes?

I know Topps did it back in 1985 with their football and hockey cards.  Donruss also created a four card set on the bottom of their 1985 baseball wax boxes: 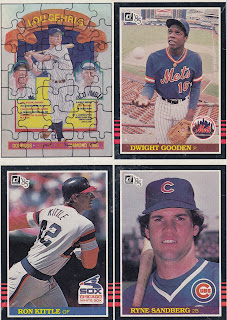 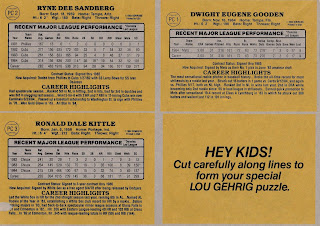 I don't remember seeing any boxes of this stuff in the wild back in 1985, so I'm pretty sure I didn't get my hands on one of these fabulous Dwight Gooden rookie card oddballs until a few years later.  And since I wasn't actively collecting football or hockey back in 1985, I'm pretty sure the first box bottoms I ever owned were the ones printed on the bottom of 1986 Topps baseball wax boxes.

Whatever I owned back then is long gone, but I have picked up a few uncut box bottoms over the years along with a few sets that were already cut up for me.  Today I figured I'd showcase the 1986 Topps set for you. 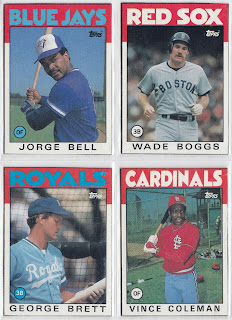 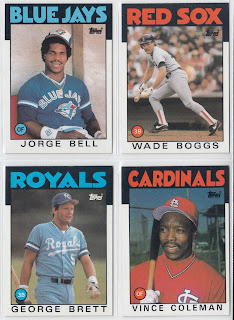 The backs are pretty much the same with the exception of the numbering and the slight discoloration on the box bottoms.  Notice that the box bottoms number the cards with letters instead. 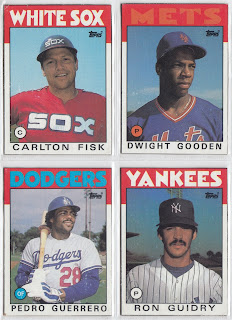 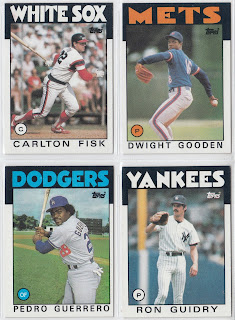 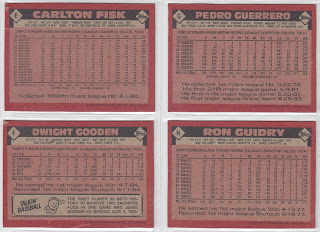 As a fan of action shots, I think Topps did a good job of choosing which photographs would be included on the base card compared to the box bottoms.   That being said... I do think the box bottom portrait shots of guys like Bell, Fisk, and Guidry would look really nice signed by the athlete. 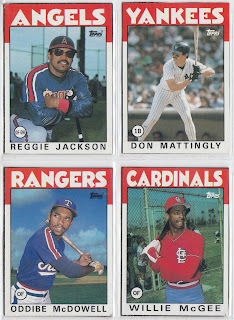 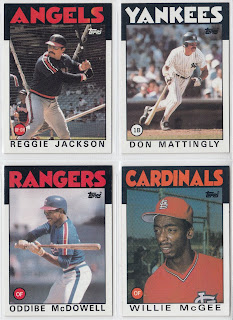 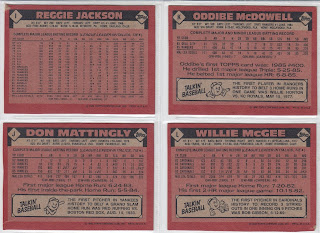 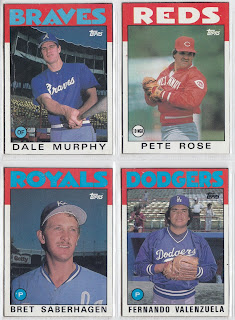 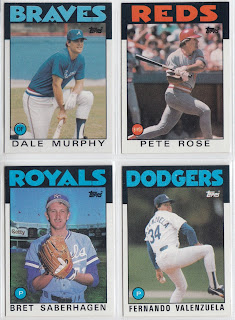 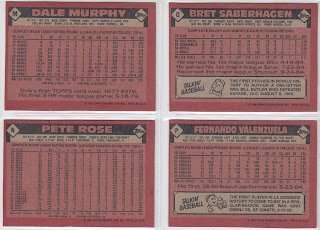 The checklist itself is loaded with familiar names... however after twenty-four years, only four of these guys have been inducted into Cooperstown.

As for finding gem mint copies of these box bottoms, I wish you the best of luck.  You have to remember that many of these box bottoms were often exposed to baseball card shop and retail store shelves.  And even if they were locked in a sealed case, they were stacked on top of each other where shifting and the weight of the boxes may have caused the box bottoms to get scratched or creased.

Personally, I don't mind that my copy of this set isn't mint.  The subtle flaws are a reminder of when collecting was a little simpler and collectors could handle their cards and cut out bottoms with a pair of scissors, instead of precision paper cutters.

I've been neglecting adding music to my posts, but here's a song that I felt that went well with today's post:


I know based on my Kenny Rogers post that some of you aren't big on country music... but music is like cards.  There's something for everyone.

Well that's it for today.  Although I'm still locked down in my home, I've started to get my school curriculum lined up for the distance learning model my district has adopted and will start implementing in a few weeks.  Although I'm not a huge fan of change, I am excited to get back to teaching.