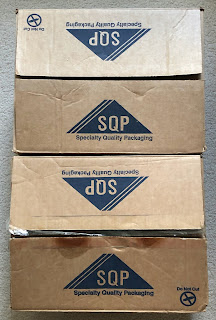 A little over a year ago, I bought two big boxes of baseball cards from a friend of mine for $30.  Inside were 183 mystery bags containing 35 to 40 cards. 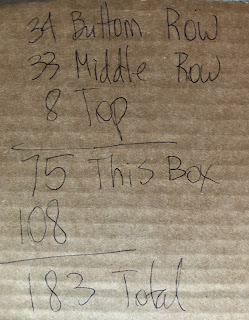 Here's a peek into each of the boxes: 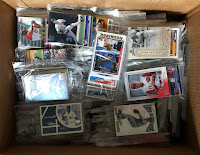 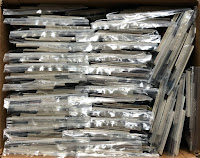 I had planned on opening these up during Spring Break of 2019, but then my mother passed away and priorities shifted.  The boxes had been buried in my garage under some books until I discovered them a few weeks ago while cleaning.

This morning, I finally got around to taking a peek inside a few of the packs.  I went with the 9 packs sitting on top of the first box: 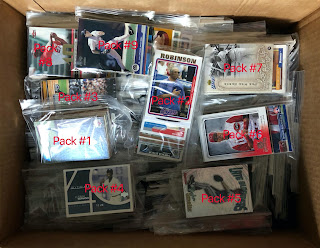 The first pack had already been opened... but the other bags were sealed with staples... which I wasn't amused with.  I stuck myself at least three times opening these bags up.

I'm not really sure what I was expecting to pull, but depending on your perspective these mystery bags could be considered garbage or a pleasant distraction from the real world.  Sadly there weren't any nuggets of treasure that'll allow me to retire early or even fetch me a Happy Meal at McDonald's.

But there were 1 to 2 inserts or parallels per bag on average.  Whoever originally built them made sure to put a recognizable name on the front and back... with a couple of stars sprinkled in between.

Personally... the joy of opening up mystery bags made it worthwhile.  As a bonus, I actually found a few cards I could use.  The rest will either be sorted into teams and passed along to fellow bloggers... or brought into my classroom for future projects.

I'm not the biggest fan of scanning, so you'll have to settle for a 9-pocket page of my favorite cards/pocket schedules from each pack: 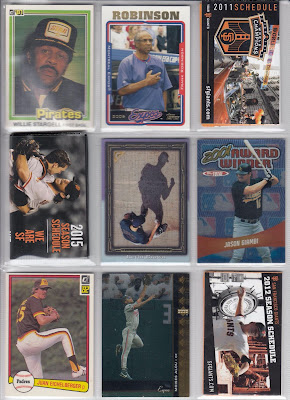 My favorite pull was the 1981 Donruss Willie Stargell.  I remember treasuring that card when I was a kid.

Since I definitely don't need to bring all of these cards into my classroom, I figured this would be a cool opportunity to give away some PWE's filled with cards from these mystery bags.  If you're interested, just put down the team or teams you're interested in down in the comment section below.

I'm not sure how much interest this will draw, so I'll go ahead and say I'll ship out at least 10 PWE's.  If more than 10 people are interested, then I'll use random.org to help choose the recipients.  The names will be entered and randomize 5 times, then I'll take the top 10 people on the list.

As of right now, I'm not going to set a deadline on this giveaway... because I don't know how long it'll take me to open up and sort all of these bags.  But I'm thinking it'll take me at least a week.

Well that's it for today.  Happy Tuesday and sayonara!

Sorry about the confusion.  I guess I didn't think everything through carefully before I published this post.  Anyways... multiple people can select the same team.  In other words if four different people want to put down the Dodgers, that should be okay.
Posted by Fuji at 3:00 PM