Last month it was a madhouse trying to get into the parking structure at the De Anza Flea Market, so I took off and went to the Sunnyvale Farmer's Market instead.  Thankfully there weren't any issues last Saturday.

I honestly don't expect to find too many hidden treasures at this particular flea market, but it's pretty big and I'm able to get my 10k steps if I walk around it twice.

On my first pass, I stopped at a familiar vendor's booth.  It was the guy who sold me a box of 2014 Star Wars Perspectives over the summer.  He has a small display case with a few hundred cards sitting in top loaders.  I must have looked through his stuff before, because I recognized most of it.  But there were a few things I set aside for a price quote. 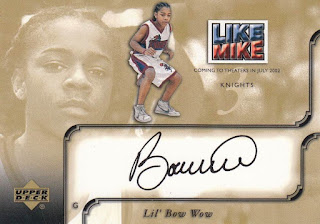 Whenever anyone says that they have good news and bad news... I'm all about getting the bad news out of the way.  And this Lil' Bow Wow is all bad news.  When I saw this card, I was so excited because I thought this was an on-card signature of the (then) teenage rapper and actor.  The kid was so famous at one point that even Fat Joe rapped about him in Lean Back (shout out to Zippy).

However after doing some searching online, this card is actually a promo card or something with a facsimile signature.

I'm not going to lie, I was bummed out when I figured this out.  The good news is I still manage to get a reasonable deal, which included autographs of two hall of famers:

Plus a rookie year insert card of a future hall of famer:

I was out of the hobby when Lebron was a rookie, so I completely missed the boat on his rookie cards.  This isn't a rookie card, but it's a rookie year insert.

The oddball issue rookie card of a future hall of famer: 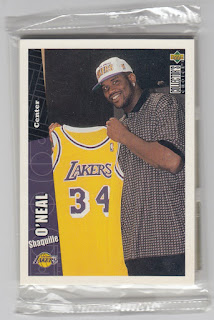 I'm not exactly sure how these team sets were distributed, but it contains a Kobe Bryant from his rookie year.

And a refractor rookie insert of a future hall of famer:

Even with the "not so real" autograph of Lil' Bow Wow, I'd probably consider this my best purchase of the day in regards to value.  Too bad I haven't followed basketball in years. 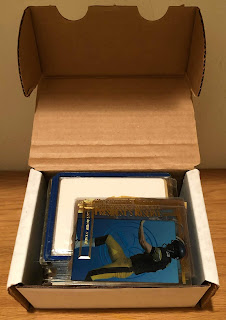 There's a lady who has a bunch of 80's and 90's junk wax boxes and sets.  Every now and then, she'll have something a little different.  This month she had a bunch of Pacific MISL soccer sets and this box of miscellaneous football cards.

One of the first cards I saw was this Barry Sanders: 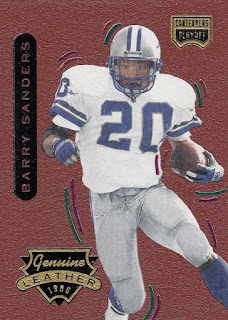 As a collector from the 90's, I remember people going crazy for these leather cards which was a tiered set.  Barry happened to be one of the guys listed on the "rare" tier.  If anyone has a Beckett from the mid 90's, I'd love to see what this card once booked for.  I'm guessing it used to sell in the $50 to $75 range all by itself.

The majority of the box was filled with 1996 Collector's Edge President's Reserve base cards, which is a pretty cool set in itself.  Plus there were a few random inserts, parallels, and a pair of mail-in insert sets: 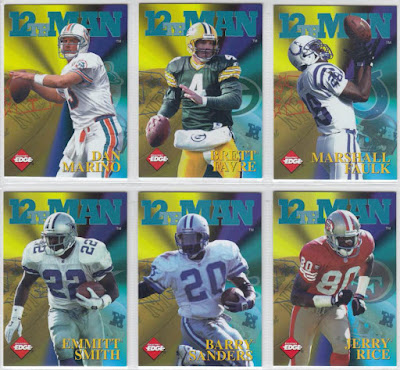 Collector's Edge inserted "trade cards" with letters on them into their 1995 packs.  Collectors who spelled out 12th Man could send in their letters along with $19.95 for shipping and handling to the company in exchange for a complete 25 card set. 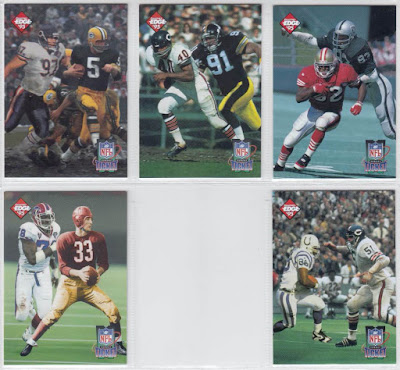 These cards featured a current player going up against a legend from the past.  According to Beckett there are two variations of this set.  One is serial numbered to 2,500, while the one I found is numbered to 20,000.  Both seem to be available for purchase through some mail order program.

My final purchase of the day was off of my buddy Tony who sets up a the local flea markets and card shows.  He asked me if I was interested in purchasing this collection of cards: 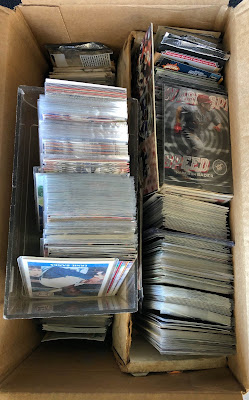 The bad news is the box was filled with a bunch of Panini inserts and parallels and early 2010's prospects that haven't really panned out.  In hindsight, I would have only offered him $10, maybe $15 for this collection.  But I don't have any regrets.  Tony is a good guy and has hooked me up a few times in the past, so everything works out in the long run.

Okay... now for the good news.  I did find a pair of really cool cards for my collection: 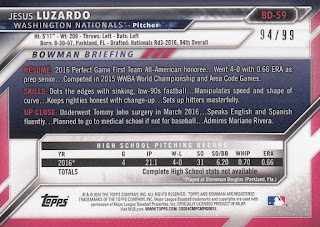 Luzardo was one of the A's top prospects in 2019 and he pitched really well when he was called up in September.

The other really cool card I pulled was this gold refractor of David Price that was the first serial numbered card in the run.  That means it'll eventually be added to my Prime #'s PC binder.

Well that's it for now.  The next flea market I'll be walking around is two Saturdays from now.  Until then, I'll probably dig up some purchases I made over the summer.  Or maybe I'll finally get around to reviewing the collection I purchased a few weeks ago from my buddy.

In the meantime, here is today's question of the day...

Let's pretend that you bought a fake autograph from a flea market vendor you may or may not ever see again.

Would you rather be oblivious to the fact that your autograph isn't real and live happily ever after... or would you want to know it was fake, but not be able to do anything about it?

I'd personally rather know the truth and be bummed out for awhile.  What about you?  I asked one of my classes a similar question (didn't use an autograph as an example) and the majority of them said they would rather not know (the bad news) and be happy.  I'm looking forward to reading your comments and seeing if I'm in the minority or not.