In the spirit of giving thanks, I wanted to let all of you know that I am truly grateful for everyone who has taken the time to read my blog posts over the past nine and a half years.  During that time, I've exchanged hundreds of trade and care packages with probably close to fifty different collectors.  If that weren't cool enough, I've actually had the pleasure to meet and hang out with four bloggers.

One of those bloggers is Ryan over at Japanese Sumo Wrestling Cards and Menko who I've really bonded with the past few months.  In October, he took the time out of his busy schedule to fly into San Francisco, so we could hang out and hit up a card show in Sacramento.  Now that's some serious dedication to our hobby.

He came bearing gifts... which I've written about here.  One of the items he gave me was a box of 2017 BBM True Heart.  If you're not familiar with this product, they're Japanese women's pro wrestling cards. 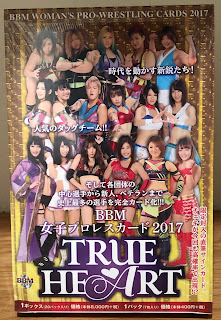 The box had twenty packs with each pack containing seven cards. 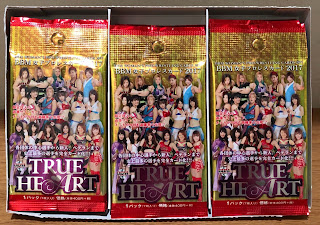 As some of you may have read, sorting cards hasn't been on my list of favorite things to do. 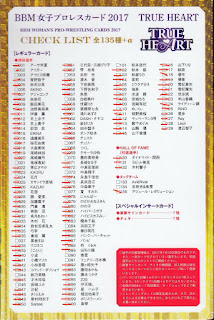 However... after opening all of these packs, I have to admit... it was nice to sit down, sort these cards by 10's, and build this set the old-fashion way.  It was true cardboard therapy.

Here's a look at what the base cards look like: 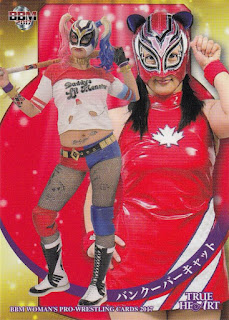 I have no idea who this girl is, but she makes a great Harley Quinn.  The Cutest Kitty Award goes to: 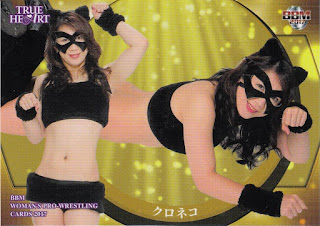 But here's a look at a Frankenset dream card... 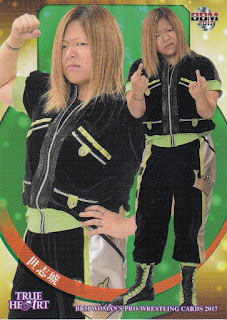 She's angry, she's tatted, and she's flipping us off.  How awesome is that?  Billy Martin would be proud.

But the on-card signatures were definitely the highlight of this box.  I'm not sure if I had a hot box or if this is the standard, but I managed to pull seven autographs... and each one was pretty unique.  See for yourself:

Each of these autographs are so awesome... and it's obvious that they take pride in their signatures.  Unfortunately, I don't know if any of these women are big names or not.  But that's okay.  They make excellent additions to my Japanese Athlete PC.  Here's my personal favorite: 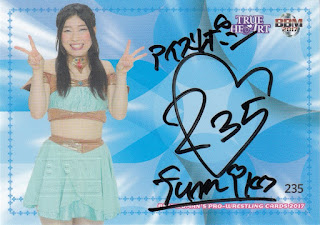 I'm not sure if she's suppose to look like Princess Jasmin or Pocahontas, but she's doing the traditional Japanese tourist pose.  She also incorporates a heart into her signature, which is really cool.

I also received two care packages this week from two famous collectors:  The Pedestrian Collector and The Lost Collector.   The plan is to blog about the stuff they sent this weekend.  But right now, I've gotta go hang out with my family and grab some more food.

Thank you Ryan for this generous box of cards.  And thank you all for taking the time to read this post.

Happy Thanksgiving and sayonara!
Posted by Fuji at 9:00 AM