1987 Topps was the first product I ever busted in bulk.  My mom would take me to Costco and I'd buy multiple boxes at a time.  If I were to guess, I'd say I opened ten to fifteen boxes of this stuff back in the day.

Inside of each pack, I would pull out one of these special offer cards:

Collectors could send in six of these "special offer" cards plus a check for $1 and pick one of the six different 10-card sets.  If you broke an entire box, you could send in all of your offer cards and a check for $6 and receive the entire 60 card set.

I may or may not have ordered these glossy sets back in the day, but I have owned a few singles over the years.  Recently I've been trying to get my hands on the Barry Bonds card, which is one of the hot prospects offered in the Set #3 and last week, I finally crossed it off of my list: 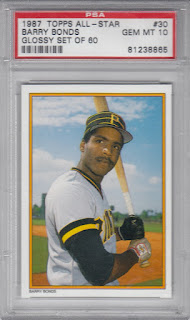 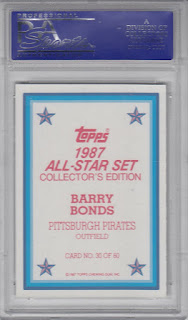 I ended up winning the auction with a bid of $11.72.  However after shipping and taxes, this card set me back $16.58.  Obviously I paid a premium because the card received a gem mint grade from PSA.  However upon closer inspection, I noticed that this card is definitely off-centered... which made me wonder how this could have happened.

It doesn't look like this PSA case has been tampered with, so I'll assume whoever sent this card in was one of those "special" clients who tend to get "preferential" grading.  I've got nobody to blame except myself.  I should have looked at the auction's photo a little more closely.  Luckily this wasn't a high end purchase.

Seeing this card managed to bring back memories of my childhood, so that's worth something.  It's also a healthy reminder for me to buy the card and not the grade.


Have you regretted any hobby purchases in 2019?


Anyone out there ever order any of these Topps Send-In sets?

Maybe one day, I'll go out, purchase all 420 cards, and display them in 9-pocket pages.  Considering I'd only be willing to spend a few bucks per set, there's not a lot of room for regret if I did end up doing it.