Life will always be filled with ups and downs.  2020 has definitely been a downer, but I know that there's a light at the end of the tunnel.  I'm just hoping I see it within the next six months instead of the next six years.
In the meantime, I take it one day at a time and focus on the positive things to help get me through the dark times.  As I've mentioned before... the hobby is one of those things.  It's not perfect.  I could find things to complain about... but in general... I think it's cool that we've experienced a card collecting boom.
Another bright spot in my life has been following the success of my two favorite MLB teams.  For the first time since 2006, the San Diego Padres are headed to the postseason.  And with the help of the Seattle Mariners... the Oakland A's have finally knocked the Houston Astros out of the top spot in the AL West.
Normally... I wouldn't celebrate anything short of a World Series title.  But the odds aren't in their favor... so why not celebrate the little successes while they're in front of us.  I figured this would be the perfect time to share another one of my summer eBay gift card purchases: 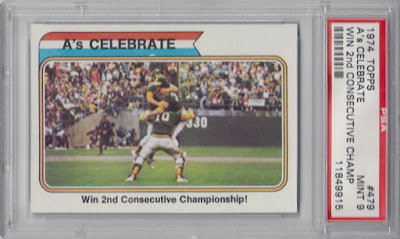 1974 Topps #479
When it comes to celebration cards, this card has to be one of the coolest around with the red, white, and blue banner... and the perfectly timed photograph.
I was barely two years old when this celebration featuring Darold Knowles, Sal Bando, and Ray Fosse took place... which means I was way more interested in sucking on my binky than watching baseball.  However forty-seven years later, there isn't a binky on this planet I'd trade this card for. 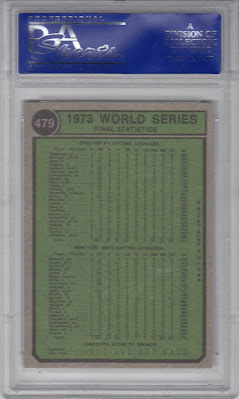 The back of the card shows off the key batting statistics for both 1973 World Series participants.  Rusty Staub fans might notice that he had one heck of a series and probably would have taken home the WS MVP Award had the Mets pulled off the Game 7 win.  Instead Reggie Jackson took it home.
As we enter the last week of the regular season, it'll be exciting to see how things play out and who will face who in this year's playoffs.  Obviously... I'd love to see the Oakland A's end up meeting the San Diego Padres in the 2020 World Series.  However I'm planning on celebrating again at the end of October regardless of who wins... unless it's the New York Yankees, Houston Astros, or Los Angeles Dodgers.
Well that's it for today.  Only three more days until the weekend... so that's a reason to celebrate.  Hope all of you are having a good week.
Happy Tuesday and sayonara!
Posted by Fuji at 3:00 PM