TWIB: The Franchise, Felines, Finest, and a Female Olympian 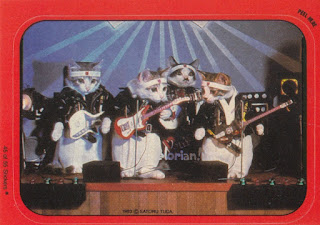 Gotta say... I really enjoy four-day work weeks.  I enjoy them when I love my job, but I enjoy them so much more when I dislike my job.  It seemed like this past week was a blur... which is probably a good thing since we had to say goodbye to another hall of famer this past week.  And that's how I'll kick off my This Week in Blogging post... 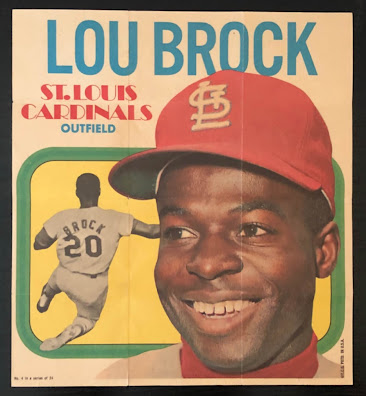 1970 Topps Posters #4
Can you list the last five stolen base leaders in each league?  If so, I'm impressed.  I know I can't.  But when I was a kid, I followed guys like Tim Raines, Willie Wilson, and Rickey Henderson as they chased Lou's records. 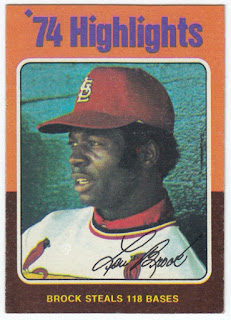 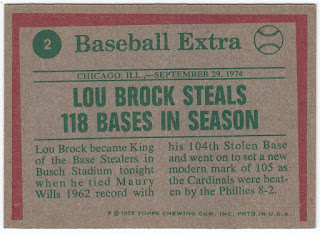 1975 Topps #2
Back then adding a 70's card of The Franchise was just as big of a deal to me as adding a card of Stretch, Pops, or the Little General. Rest in peace Mr. Brock.
#2:  Fancy Cats 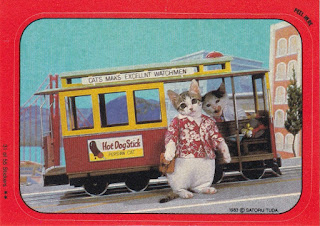 1983 Topps Perlorian Cats #31
When it comes to cool card blog names, Jon's A Penny Sleeve For Your Thoughts is one of the most creative around.  Well this week he wrote a post about possibly switching gears and changing it to A Whisker For Your Thoughts and he wants to hear your feedback.
Even thought I like the "Penny Sleeve" title better, I'd support his blog either way. 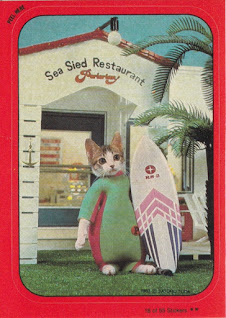 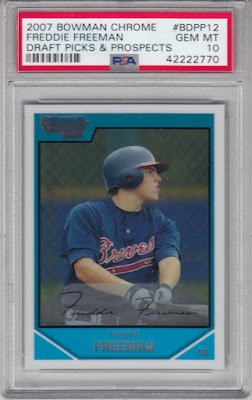 2007 Bowman Chrome #BDPP12
Yesterday, Shane over at Shoebox Legends wrote about his slabbed Justin Verlander rookie card that he picked up for way less than the price of a blaster... which reminded me of this Freddie Freeman rookie card I purchased for $16.50 last year.
He's been on an absolute tear the past month or so... collecting a hit in twenty-four out of his last twenty-five games with a .394 batting average, .509 on base percentage, and a .723 slugging percentage.  I don't go out of my way to collect his cards, but I wanted something of his for my collection, because he's just one of those likable guys who works hard and has been loyal to the Atlanta Braves since they drafted him thirteen years ago.
#4:  Fan of the Game 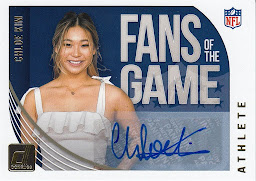 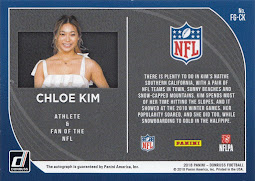 2018 Donruss Fans of the Game Autograph #FG-CK
Although my focus will remain on baseball until the final out of the 2020 World Series, I'm excited that the NFL season is on its way.  This autograph of Olympic gold medalist, Chloe Kim is my most recent NFL trading card related purchase.
I purchased this card back in June for $24.50 (+ $4.50 shipping and $2.27 tax), because I've been trying to add her signature to my collection ever since watching her gold medal performance on the halfpipe at the 2018 Winter Olympics.
#5:  New Blog on the Block 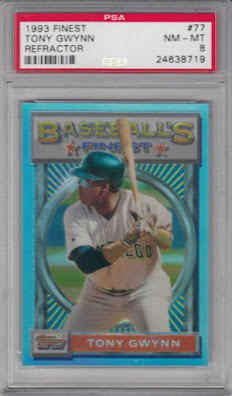 1993 Finest Refractor #77
Chris (The Collector) has started a new blog:  The 1993.  As you might have guessed, it's a blog that focuses on 1993.
I'm pretty sure that I was out of the hobby for most... if not all of that year.  The card shop I worked at shut its doors and I had blown most of my savings on building my 1992 Fleer Ultra master set.
I'm looking forward to seeing what I missed that year.  As for the Gwynn, it's probably my nicest card from 1993.  I picked this card up back in April of 2016 on 4 Sharp Corners for $63.50, which is about a third of what people are paying these days.
Well that wraps up another week in sports and our blogosphere.  If there was a major sports or card related story you think I should have covered, please leave it down in the comments.
Otherwise, here are your questions of the day:
What are some of your favorite under-appreciated non-sports sets?
When his career is over, do you predict Freeman will eventually get the call from Cooperstown?
Do you have a favorite Olympic athlete?
What's the first hobby related thing that comes to mind when you think of 1993?
Happy Saturday and sayonara!
Posted by Fuji at 3:00 PM