Better Than A Card Shop

The blogosphere is filled with generous bloggers who send cards across the country unconditionally in an effort to help other collectors and brings smiles to their faces.
Three weeks ago, I opened up a pack of 1989 Donruss Pop-Ups and mentioned how I would have rather pulled a few other cards instead of a Tom Kelly Pop-Up.  Well last week all of the cards I mentioned arrived in two PWE's from Daniel over at It's like having my own Card Shop.
First up are all three Oakland A's Pop-Ups included on the checklist: 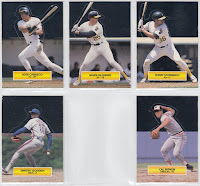 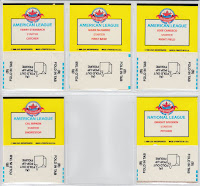 As you can see, he also threw in the Dwight Gooden and Cal Ripken Jr. cards... which have each been added to my binder collections.
Next up are the All-Star cards that were part of that product: 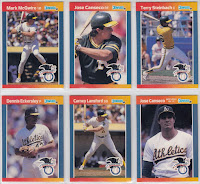 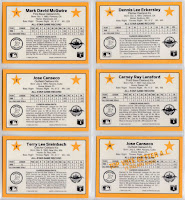 There were five Oakland Athletics on the 1988 American League All-Star roster and the three cards on the top row represent the starters.  Canseco received a second card, because he lead the American League in All-Star votes.
The final card Daniel sent was my latest addition to my Golden Gate Bridge collection: 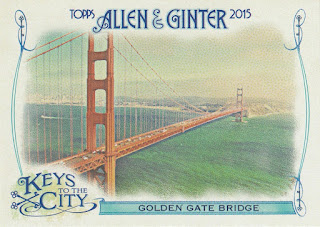 2015 Allen and Ginter Keys to the City #KTC-7
This card brings the collection up to five cards. 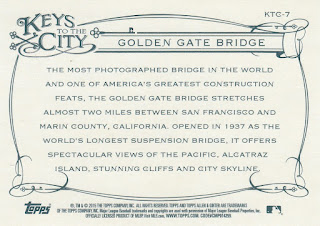 The back states that the Golden Gate Bridge opened in 1937 and is the most photographed bridge in the world.  If you've ever had the opportunity to see it in person, you would understand why.
He showed off this card on his blog a few weeks ago in an effort to find someone with an extra 1976 Topps Dennis Eckersley or 1990 Leaf Frank Thomas rookie card.  If anyone out there has either of these cards, he has a very generous offer laying on the table.  Click here to see it.
Thanks Daniel for taking the time to read my blog and send me specific cards for my collection.  Unfortunately, I don't have an extra copy of either of those cards... but I will dig up some Barry Bonds cards for your project.  Hopefully you'll be able to use them.  If not... maybe you can use them for trade bait to land you some cards you can use.
Happy Monday and sayonara!
Posted by Fuji at 3:00 PM