Time is a tricky thing.  One one hand, it seems like I just wrote last week's This Week in Blogging post.  On the other hand, this past week of distance learning seemed like an eternity.
Oh well, let's get this party started...
#1:  Pujols Passes Mays 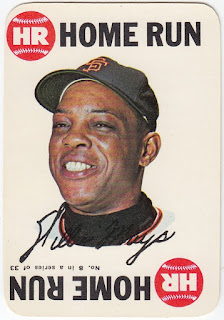 1968 Topps Game #8
Seeing a legend like Willie Mays slowly move down the all-time home run leaders list is sort of bittersweet.  Seventeen years ago, he was third on the list behind only Hank Aaron and Babe Ruth.
Now he's looking up at Barry Bonds, Alex Rodriguez, and Albert Pujols.

2000 Multi-Ad Sports Midwest League Top Prospects #2
That being said... congratulations to Pujols and all of his fans!
#2:  Greetings from Syracuse 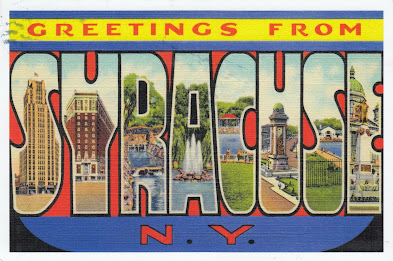 Earlier in the week, CinciCuse Bill showed off some new acquisitions for his Syracuse Baseball Wall of Fame collection over on his blog, Bill's Baseball Card Blog.  About a week earlier, I received the above postcard from one of my former students who is currently in her senior year at Syracuse.

There have been a lot of notable alumni, but here's the one that stood out the most in my collection: 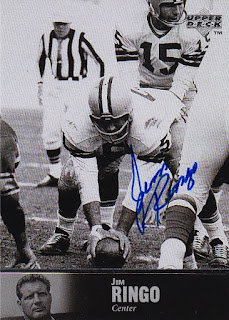 1997 Upper Deck Legends Autographs #AL-16
Jim Ringo was drafted by the Green Bay Packers in the 7th round back in 1953 and went on to have a hall of fame career with them and the Philadelphia Eagles.  My father has mentioned his name a few times over the years, as he was an avid fan of the Packers back in the 50's and 60's.
#3:  Sports Illustrated for Kids Cards 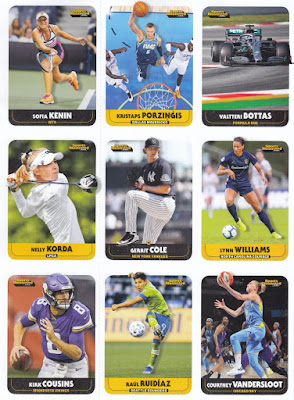 This week (or maybe last week), the September/October issue of SI for Kids began arriving in mailboxes around the world.  There weren't any athletes that stood out this time around, but I Googled a few of them. 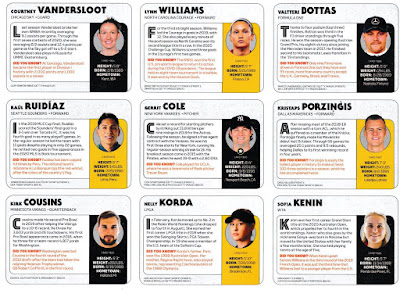 Nelly Korda is the daughter of two professional tennis players.  Her father won the 1998 Australian Open.  Speaking of tennis... Sofia Kenin was recently in the news.  I hadn't heard of her or the "double bagel" reference until today.
#4:  Athletes Whose Names are Jobs 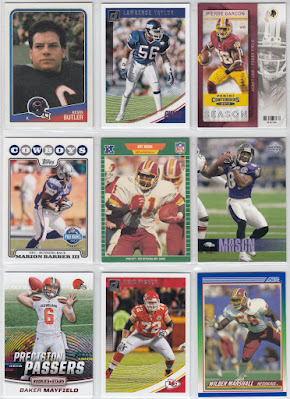 When it comes to creative collecting, I've gotta give Elliptical Man some props.  He recently gave away some cards featuring players who names double as careers.
His PWE inspired me to flip through the Oakland A's collection. where I found a hall of famer that would fit this collection:

1973 Topps #235
Thanks Brenden for the PWE.  What exactly do you collect?  This is the 2nd care package you've sent me and I read your blog religiously, but still haven't figured out what you collect.
Oh... by the way... Art Monk also attended Syracuse University.
#5:  Save Second Base
It's that time of the year again and Collecting Cutch is hosting his annual Save Second Base event.  Earlier in the week, he gave his readers a peek at the first prize and it's a doozy... 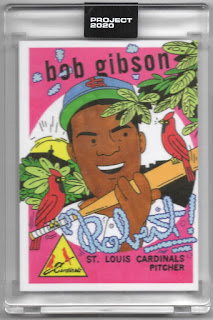 2020 Topps Project 2020 #84
I'm not gonna say that I'm the biggest fan of Project 2020 cards... but I've commented numerous times professing my fanfare for Ermsy and his cards.  In fact... I have an Ermsy post slated for Thursday.  Stay tuned.

1991 Face to Face #271
Anyways... if you're interested in an opportunity to win this card, all you need to do is write a blog post where you talk about your favorite John Travolta movie as well as plug the contest.  Leave a link in the comment section of his post.  Make sure to mention that Travolta's wife, Kelly Preston recently lost her battle with breast cancer and that it's important that we all work together to raise awareness for a cure.
Okay, here's my response... 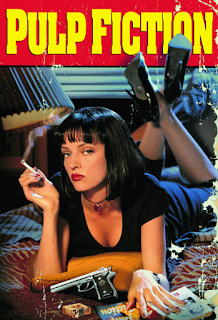 As much as I enjoyed watching Grease as a kid... Pulp Fiction is my favorite Travolta film.  In fact that movie would probably be on my Top 20 list of favorite movies. 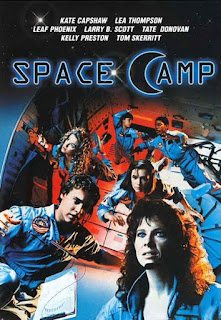 As for my favorite Kelly Preston movie... I can't really say that I have one.  But I do remember thinking she was really cute when I watched Space Camp back in middle school.
Okay... that wraps up another week of This Week in Blogging.
Feel free tell everyone a creative way to collect, your favorite bagel, your favorite Topps Project 2020 artist, or favorite female tennis player down in the comment section below.
Happy Saturday and sayonara!
Posted by Fuji at 3:00 PM