Hope all of you had a great weekend.  Yesterday afternoon, I spent about an hour digging through a box of slabbed cards I purchased a long, long time ago.
Back in January of 2013, I purchased a huge collection at the De Anza Flea Market for $160.  You can check out the photos here.  I'm not exactly sure if I ever summarized this purchase, but it's one of the best flea market finds I have ever stumbled across.
It was one of those deals that my buddy Mike and I still talk about to this day.  Anyways... within the collection were hundreds of slabbed cards.  They sat in my garage for about five years... and then a couple of years ago I brought them into my office where they've sat behind some shipping supplies.  I've sat down a few times and sifted through them... most recently yesterday.
Here were four that caught my attention: 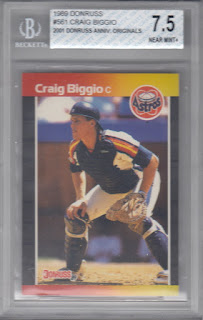 1989 Donruss #561
At first glance, this is a hall of fame rookie card that received a less-than-desired grade from BGS.  However when I looked at it a little more carefully, I noticed that this is actually a buyback from a product I never purchased before: 2001 Donruss Anniversary Originals. 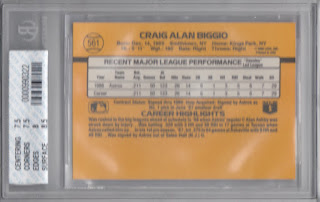 There's no buyback stamp or anything... so the only proof resides in the holder.
Next up a card that fits into two different collections: 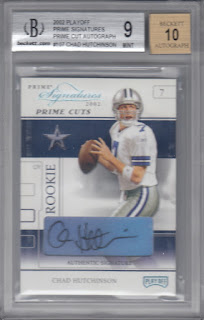 2002 Playoff Prime Signatures #107
Chad Hutchinson is a two-sport athlete who pitched for the St. Louis Cardinals and played for the Dallas Cowboys and Chicago Bears.  More importantly... he attended Stanford University... which I maintain a small PC of. 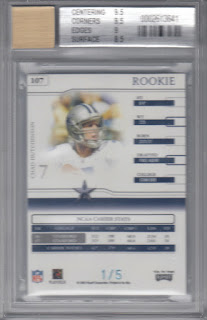 You'll also notice that this card is serial numbered #1/5... which means it also fits into my Prime #'s PC.  And yes... I know that the number "one" isn't a prime number.
I also found this graded Michael Jordan insert: 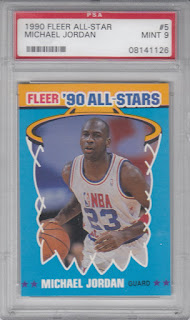 1990-91 Fleer All-Star #5
Yeah... I know.  It's not gem mint, but it still sells for more than you probably think.  It doesn't matter, because you should know by now that I rarely flip cards. 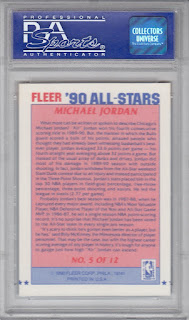 Plus I collect Jordan.
The last one is a card I may or may not have shown before.  I've definitely pulled it out of the box a few times and admired it. 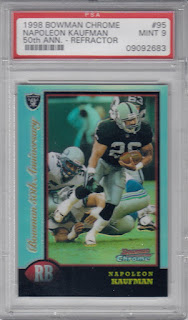 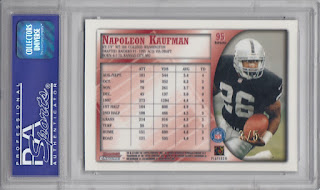 Like the Hutchinson, it's numbered to only 5.  Pulling a common would have been a nice pull, but back in 1998 Kaufman was coming off his best season and he was only twenty-five years old.  Raider fans were pretty excited about him lining up in the backfield.
That's it for now.  I know that most of you aren't into graded cards... but I can't only write about 70's Kellogg's and Topps Project 2020 cards.  Well... I guess I could... but I won't..
Happy Monday and sayonara!
Posted by Fuji at 9:00 AM