Steals of a Lifetime

Money isn't everything.  Well at least not to me.  That doesn't mean I'm careless with the Benjamins I do bring home.  After my credit card issues in the 90's... I've worked very hard to stay on top of my expenses.

In fact, collecting within a budget has been a necessity... and that's why I've been a bargain bin collector since I returned to the hobby in the late 2000's.

On Monday, Night Owl wrote an interesting post detailing some cards he was able to acquire cheaply that have significantly risen in value.  He titled his post, Steals of a Lifetime.

Today, I thought I'd follow Night Owl's lead and share a few of mine.  Now I'm not organized enough to dig up the greatest deals I've ever had.  There are way too many flea market finds, card show hauls, and eBay/COMC purchases to sift through.  So for the sake of this post, I decided to focus on graded rookie cards, because they are fairly easy to search up in my purchase history and will be easier to assess the current market value due to the third party grading.  Now some of these cards have made appearances on this blog in the past, but hopefully there are a few surprises as well.

So without further ado, here are thirteen steals of a lifetime... 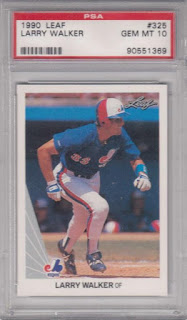 I accidentally bought two of these a couple of years ago.  The other one set me back $24.  Actually I have multiples of a few cards in today's post.  One day, I'll organize all of my duplicates and sell them at the same time. 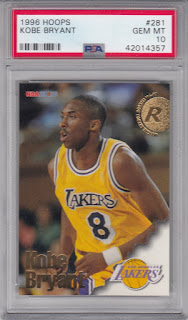 There are a few Kobe cards in this post... and obviously his accident back in January impacted his card values.  I started picking up his graded rookie cards about a year ago, because he's my favorite player and I knew he'd be entering The Naismith Memorial Basketball Hall of Fame this upcoming summer.  I also knew this would drive up his card prices... possibly out of my budget. 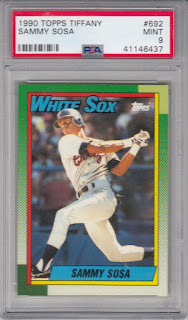 I remember thinking to myself that this was a little underpriced while flipping through their inventory.  But no way I could have ever predicted this.  I can't wait to watch the documentary next month. 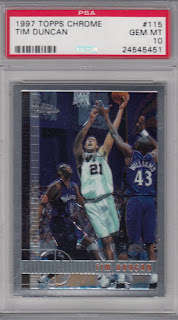 This card was purchased less than a year ago and I've watched it slowly rise in value ever since.  Then a few months ago, it made quite a leap.  Then another leap.  And another.  I've wanted one of these rookie cards since they were hot in the 90's.  It just shows that timing plays a huge role in securing deals. 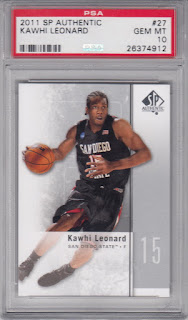 This was one of those purchases where I bid on the item, because I had already won an item from the dealer... and he offered free shipping on anything else you won. 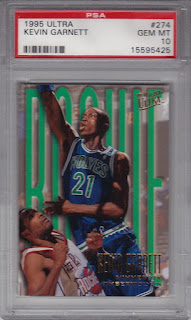 Okay... now we're getting to some of the older COMC purchases.  Back in the early 2010's, dealers were blowing out their graded cards.  I decided to stock up. 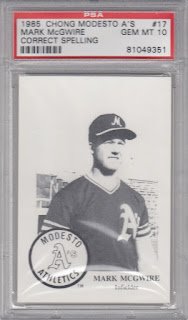 Yup.  Another card impacted by a documentary. 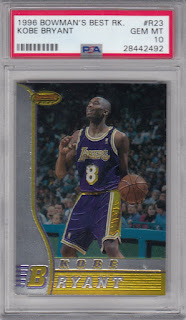 Can you believe I picked up this card for under $50 a year ago?  Crazy. 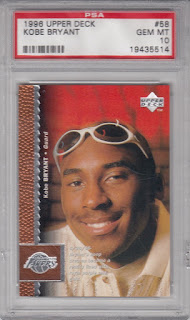 Another crazy Kobe.  Once again, I know that the values of Kobe's cards are inflated and will eventually settle, but there's no way this card ever goes back to what they were a year ago. 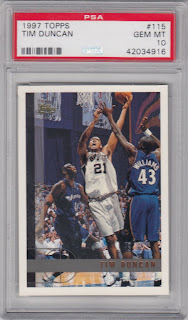 Like the Sosa, this was a card that seemed to be priced too low, so I added it to the cart.  In fact a few months later, they added another one to their inventory for less than a dollar more... so I grabbed it too. 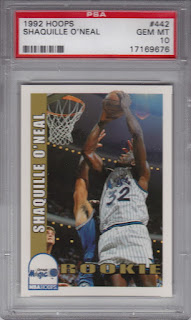 When I saw PSA 10 Shaquille O'neal rookie cards were listed for $3.36... I bought the seller's entire inventory.  I flipped a few to cover my costs and the rest is gravy. 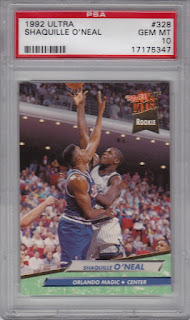 The guy with the O'neal Hoops rookies also had Ultra rookies.  Yup.  Purchased all of these too. 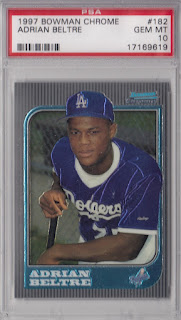 But the highlight of that COMC purchase was this Beltre rookie card that I've blogged about before.  Unfortunately... the seller didn't have a stockpile of these.  Otherwise, I'd be looking into picking up a 1956 Topps Mantle or 2011 Topps Update Trout right now.

Speaking of that Trout... that's one of the cards featured in Night Owl's Steals of a Lifetime post.  So head over there and see some his steals.  But before you do, don't forget to answer today's question of the day...


What are some of your steals of a lifetime?


Happy Thursday and sayonara!
Posted by Fuji at 3:00 PM