Most people are familiar with Rickey's 1980 Topps rookie card, but it's not his first trading card.  He has a card in the 1977 Chong's Modesto A's set, which doesn't pop up on eBay very frequently and when it does... it typically sells for over $1,000.  I don't anticipate owning this card in my lifetime, so I settled for his second official trading card instead. 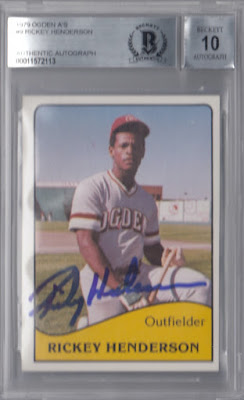 According to Beckett, there were approximately 3,000 sets produced.  However I assume that someone out there has reprinted these, because this card can be found all over the internet and they're reasonably priced. 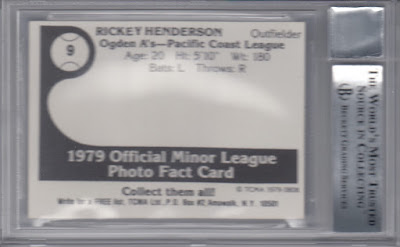 I purchased mine back in June as part of a complete set on eBay for $40, which honestly seems a little too good to be true.  Whatever.  I was happy to add it to my collection.

I actually picked it up with the sole intention of having The Man of Steel sign it at the 2019 Super World Con.  My buddy Mike was able to secure his autograph for $80.  Plus I paid $10 for Beckett to authenticate and encapsulate the autographed card.  The final price tag was $140, which isn't cheap... but the result was cornerstone card for my Rickey Henderson PC.

Not bad for settling for second best, right?


What are some cards you would love to have, but know you'll never own?  Are there cards that you'd be satisfied settling for instead?  If so, which ones?

That's it for today.  Happy Thursday and sayonara!
Posted by Fuji at 3:00 PM