What's on today's sorting list?  It's this 2019 Topps Factory set that I picked up on Target's website last week:

I normally don't go out of my way to buy factory sets, but there were two reasons I grabbed this one.

Getting back to the sort, Topps has once again decided to give collectors the thrill of the sort.  Instead of having their factory sets presorted, they have it mixed up.  At least they split it up into Series 1 and Series 2.

As of right now, I've currently broken things down into stacks of 100: 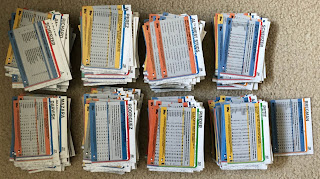 As soon as I'm finished writing this post, I'll break down each of these stacks into tens and then down to the ones.

But before that, I thought I'd give you a quick look at the five rookie card variations (along with the regular rookie cards) that were included with this set: 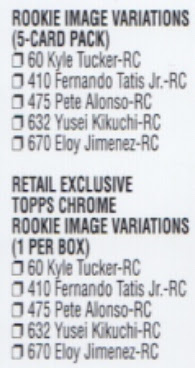 Topps had originally planned on including Kyle Tucker as part of the rookie image variations.  But I guess the Vladimir Guerrero Jr. hype convinced them to tinker with the checklist.

Vladimir fans will be excited to know that they actually included an extra rookie card of him as well:

#700a is the one that came in the 5 card rookie image variation pack, while #700b was inserted right next to the pack.

This particular factory set also comes with a retail exclusive Chrome rookie variation.  I was hoping to find a Fernando Tatis sitting in my set.  Instead, I found...

Okay... that's all for today.  I've gotta get back to sorting.  Happy Saturday and sayonara!
Posted by Fuji at 3:00 PM