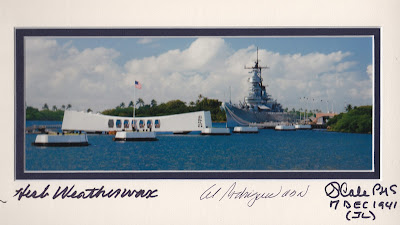 When the Japanese bombed Pearl Harbor on December 7th, 1941, it changed millions of lives across our country and around the world.  Two of those lives were my parents.  Both of whom were on Oahu on the morning of the bombing, yet they had two different viewpoints of the infamous event.

My mom's family owned property in Honolulu on Waiola Street where my aunty and cousin still live.  Back in 1941, my mother was only 6 years old and that morning she was removing the roots off of moyashi bean sprouts for her mom on the back stairs of their home.  At around 8am she could hear explosions and began seeing puffs of black smoke off in the distance at Pearl Harbor (approximately 10 to 11 miles away).

Two blocks away, my mom's elementary school was hit by a bomb and caught on fire.  In the other direction one or two stores near McCully and King were also destroyed.

Later in the morning, my mom's family was told they might need to evacuate, so they packed clothes and family valuables.  Luckily they never actually had to leave their home.

At some point, my mom remembered soldiers visiting their house.  They broke the family portrait of Emperor Hirohito and Japanese records.  They were also instructed to cover the windows with tar paper to blockout any light.  My grandfather was the block warden and would go around the neighborhood to make sure no light was visible at night.  She also recalled my grandfather and some neighbors building a bomb shelter in their backyard.

About 40 miles northeast of my mother's house, my father's family lived on a sugarcane plantation in Waianae.  At the time of the attack, my dad was 9 years old.  He remembers being outside with some of the other plantation kids playing that morning.  They noticed a bunch of planes flying close to the shore, but nobody thought it was too big of a deal.

Everyone living on the plantation was used to seeing and hearing the rumbling of U.S. Navy or Air Force planes.  The only difference this time was the markings on the wings of the planes.

A little while later they could hear the explosions at Pearl Harbor and Schofield Barracks.  That's when they knew something wasn't right.  Like my mother's family... they were forced to black out their windows.  Soldiers visited them as well... and my dad remembers confiscating their short wave radio.

In a sense, my parents were lucky that they were in Hawaii during World War II.  We've all heard the stories of the Japanese-Americans living on the mainland during the war.  There were a few internment camps and detention centers on the islands, but due to the sheer number of Japanese-Americans living in Hawaii at the time, the majority were not taken from their homes.  That being said, 2,270 people of Japanese ancestry in Hawaii were required to go to the local camps or were transferred to the camps on the mainland.

December 7th will always be a date which will live in infamy.  My thoughts go out to all of the families who lost loved ones that day.

I wrote this post to document my parent's personal experiences.  I interviewed my mother on this subject about two years ago and talked to my dad yesterday afternoon.  I know that this isn't my typical blog post, but I figured there might be a few people interested in reading about the attack on Pearl Harbor from a different perspective.

The matted print at the beginning of this post features the USS Arizona.  I purchased it about ten years ago when my family took the Pearl Harbor tour.  While we were there, we had the opportunity to meet three Pearl Harbor survivors:  Herb Weatherwax, Alfred Rodrigues, and Sterling Cale.

Mr. Weatherwax sadly passed away on December 12, 2016.  The Honolulu native was 99 years old.  Earlier this year on February 24th, Mr. Rodrigues passed away.  He was born on Kauai on February 7th, 1920.  At the age of 98, Sterling Cale is believed to be the last military Pearl Harbor survivor still living in Hawaii.

I was honored to be able to meet and shake the hands of these real American heroes.

Happy Saturday and sayonara!
Posted by Fuji at 7:48 AM